By Leon Stafford, The Atlanta Journal-Constitution

The district’s plan calls for offering in-person classes a few days a week if infection rates in the east metro Atlanta county dropped below 100 infections per 100,000 people for 14 straight days.

DeKalb came close to that threshold with several days below the 100 infections benchmark in early October, but the numbers increased above that level in recent days. The Georgia Department of Health reported 118 infections per 100,000 people in DeKalb on Oct. 18, the school board said.

“We are still in the same zone known as high,” said Michelle Jones, a member of the district’s COVID-19 Reopening Task Force.

Across the metro area, school districts not offering in-person learning options are facing pressure from some parents, businesses and political leaders. Some DeKalb parents are flooding district leaders with emails in pleading for a return to classes. Billboards on I-85 and I-285 are pushing the idea.

School districts in Cobb, Fayette, Fulton, Gwinnett and Henry counties have brought or plan to bring back students to classrooms. But Atlanta Public Schools, City Schools of Decatur and Clayton County are sticking with virtual learning for now.

DeKalb Schools Superintendent Cheryl Watson-Harris said it’s important for the district to hear differing voices on the issue, but it was the data that was most persuasive.

“We are leading from a place of what is in the best interest of our students and our staff at this time,” she said. “Our intention here is to be transparent on our plan and our intentions on the data points that we’re using.” 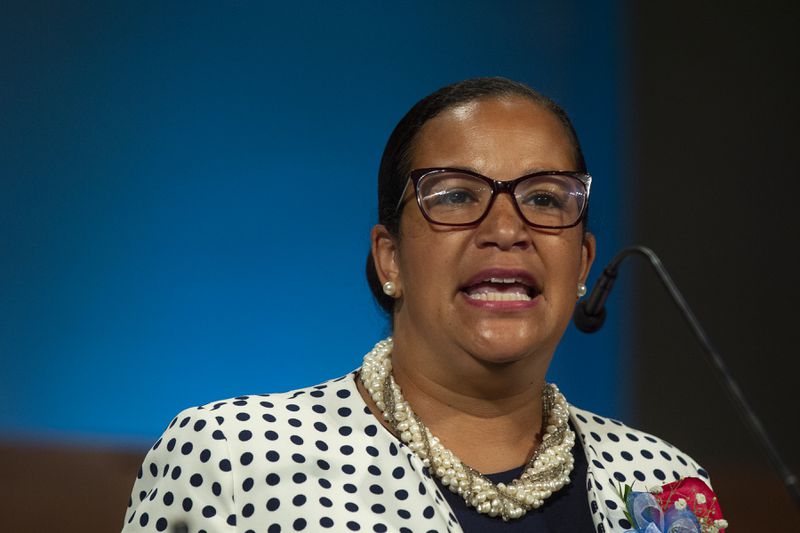 Parent John Carden, who has two daughters in the DeKalb school system, told district leaders that his children are falling behind because of remote learning. His 6th-grade daughter only gets two days of live instruction while his third-grader received 10 minutes per class per day with a live teacher.

“When the cameras are turned off, she is expected to self learn,” he said. “Third-graders cannot teach themselves math and science.”

Opponents have said the district needs to weigh the impact its decision could have on the poor and communities of color. That’s because many don’t have access to health care and disproportionately work in jobs where they are exposed to COVID-19, such as restaurants, grocery stores and hotels.

“There cannot be a one-size fits all reopening announcement when we know there is no one experience of this pandemic,” Amy Jaret, a teacher at Clarkston High School who opposes in-person instruction, said during public comments Monday.

District leaders said the school system has been cleaning schools while they have been shutdown, as well as updating HVAC systems in anticipation of providing better airflow for buildings when students do return. The district also is installing plate-glass partitions in offices, stations for filling water bottles and equipping all buses with hand sanitizers.

Watson-Harris said that when the district finally returns to classes, families that prefer to continue with all virtual instruction will be allowed to do so.

Board member Vickie Turner acknowledged that many people will be disappointed with the board’s decision, but that the safety of students and staff is paramount.

“We will not move until the appointed time when the data and the science are in agreement that it is the right time for us to re-enter,” she said. “So I ask for your patience. I know that’s a hard ask, that’s a difficult ask, but I still ask for it. We are trying to make the right decisions for all concerned.”