A filing in Maricopa County Superior Court suggests that a deal could be in the works in the criminal trial of a former chief financial officer of the Scottsdale Unified School District.

A grand jury indicted Laura Smith, the district’s former CFO, in 2018 on charges of fraud and conflict of interest. The Arizona Attorney General’s Office is prosecuting the case.

Smith and the AG’s Office reached a tentative agreement, one that required “additional time to resolve outstanding issues therein,” according to a Oct. 6 court filing from Smith’s attorney Richard Gaxiola.

But the deal might be on shaky ground, Gaxiola told The Republic Monday.

He said that the two parties had discussed and tentatively agreed to reducing the charges against Smith to a misdemeanor, but that the AG’s Office later pulled out of that agreement.

Gaxiola said he couldn’t speak to the specifics of any deal that had been struck with the AG’s Office, as it could potentially be withdrawn at the next court date.

The two parties are scheduled to meet in a status conference Nov. 3.

Gaxiola said Monday that the case likely would head to a trial. “We won’t know for certain until the next court date when the AG comes in and puts their position on the record,” he said.

Smith faces 12 counts of fraud and conflict of interest that contend she concealed her stake in a consulting company that did business with the Scottsdale school district.

Smith was placed on leave and resigned in January 2018 amid a district investigation into procurement concerns. The probe eventually caught up with other administrators, including former Superintendent Denise Birdwell.

The Attorney General’s Office declined a request for comment. “The case is still ongoing and it wouldn’t be appropriate to comment any further at this time,” spokesperson Katie Conner said.

The nine conflict-of-interest charges Smith faces relate to her involvement with Mesa-based consulting firm Professional Group Public Consulting, which the district contracted with and in which Smith had an ownership stake.

Smith was placed on paid leave and resigned from the district in January 2018after it was discovered that she signed off on documents related to paying PGPC.

Smith had signed a conflict of interest disclosure shortly after she was hired by the district in February 2017 but did not disclose her substantial interest in PGPC, according to a district investigation.

Smith originally contended that she only signed off on two district payment documents to the consulting firm, but public records showed that Smith signed off on nine change orders for PGPC when she still had a vested interest in the company.

Five of the change orders increased the amount the district paid the consulting firm, to $41,583 from $25,510.

The district’s investigation also found that Smith also did not disclose the substantial ownership interest of her sister, Caroline Brackley, in the consulting firm.

Smith, in her resignation letter, said her relationship to Brackley was common knowledge among educators and that failing to disclose it was an “innocent mistake.” She said signing off on documents related to paying the consulting firm was “no more than a ministerial error.”

After her indictment in 2018, a report issued by the Attorney General’s Office and the Auditor General’s Office said, “Although Ms. Smith should have known she was required to disclose her substantial interest in PGPC and refrain from participating in any district decisions affecting PGPC, she failed to do either.” 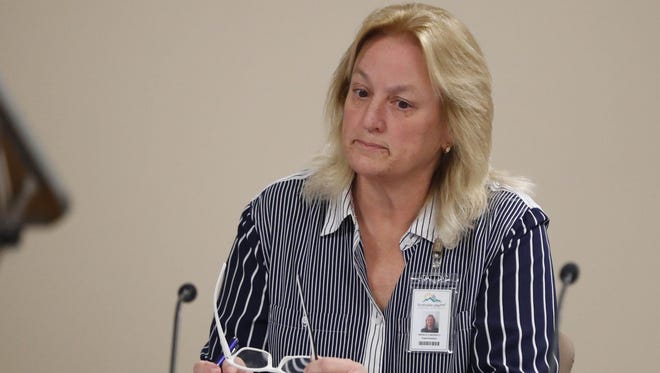 Trial would cap off years of controversy

Questions around district finances, conflicts of interest and cronyism began swirling around the district in early 2017.

The school board initially dismissed the complaints, but the district later hired an outside attorney to conduct its own investigation.

The AG’s Office ultimately found that the district violated Arizona procurement law but settled with the district to avoid further expenditure of public funds in prosecuting and defending the case.

Smith’s trial is tentatively set for December, but the case has been continued several times since she was reindicted in January 2019.

Smith is the only district administrator who has been criminally indicted.

Birdwell was hired as the lead teacher at a small charter school in Fountain Hillslast year.