Opened Oct. 21 2005, Atlantic Station has proven itself one of Atlanta’s most popular modern landmarks. PHOTO: Christina Matacotta, for The Atlanta Journal-Constitution

By J.D. Capelouto – The Atlanta Journal-Constitution

On this day 15 years ago, a “city within the city” opened in Atlanta.

Photographs from The Atlanta Journal-Constitution’s archives chronicle the evolution of the site, from an Atlantic Steel site in the 1900s to a popular residential and commercial area along the Downtown Connector.

The ambitious project, which involved almost a decade of planning and a special tax arrangement, spurred the construction of the yellow 17th Street bridge over the interstate and transformed the city’s neighborhoods just west of Midtown.

The $2 billion development included 1.5 million square feet of retail and entertainment space, several office towers and thousands of residential units when it opened, according to AJC archives from October 2005.

One headline asked, “Can much-touted development live up to its hype?” Since then, more buildings and homes have been built on the 138-acre site. 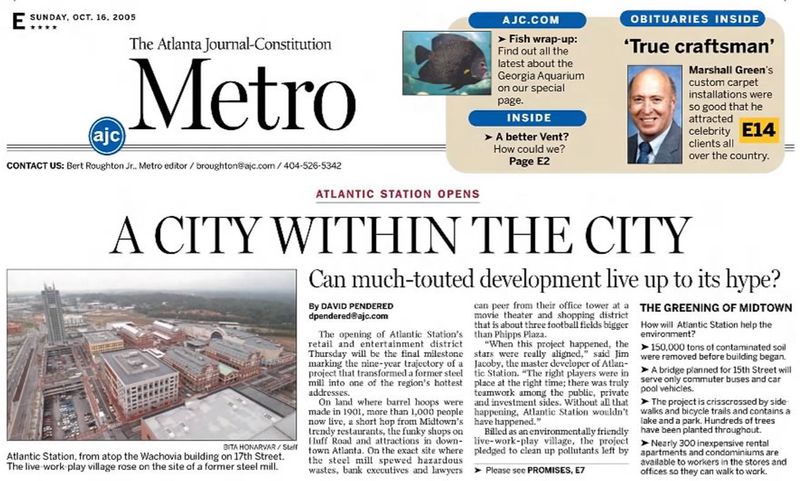 Atlantic Station has “outperformed expectations,” general manager Cornell Holmes said in a statement celebrating the anniversary. ”The neighborhood has become an integral part of the community, spurring economic growth in the heart of the city and prospering as one of Atlanta’s first successful examples of a live, work, play environment.”

Like many new high-end developments in Atlanta, Atlantic Station also faced some criticism that it was accelerating housing affordability issues in the city, especially on the Westside. A New York Times article from 2006, headlined “Gentrification Changing Face of New Atlanta,” identified Atlantic Station as a major source of new housing as more people moved into the city.

To mark the 15-year anniversary, Atlantic Station is putting on a self-guided audio tour of the district later this month that celebrates the area’s history.