Peoria residents could see a move toward attracting more trendy development and high-paying jobs under a proposition on their Nov. 3 ballot.

Proposition 445 on the ballot asks Peoria residents to vote on the city’s General Plan, which gives a broad vision for the City Council to use as a roadmap in making future decisions. Arizona cities have to update or re-adopt a general plan once every 10 years.

The proposed plan, dubbed “PlanPeoriaAZ2040,” was crafted to guide the City Council through the next two decades as it shapes the Phoenix suburb’s development, works to draw new employers and focuses on quality of life improvements.

The city last updated its general plan in 2010.

Peoria, like much of metro Phoenix’s west end, has exploded in growth. Residents across the region for years have spent an outsized amount of their time commutingto Phoenix and the East Valley for work.

Leaders and residents say an updated plan is needed to keep up with that exponential growth.

“I’m hoping it gets passed, because right now we’re operating off the 2010 General Plan, and obviously a lot has changed up here in the last decade,” said Katie Roe, a north Peoria resident and founder of the grassroots social media group Upper West Side PHX.

She said she wants to continue to see more independent restaurants and stores come to the area, as well as high-paying jobs, robust healthcare options and shaded walking paths.

City officials say they need to keep up with the fast pace of growth, which is expected to bring another 100,000 residents to the city of some 172,000 by 2040, according to city projections.

The general plan lays out steps to keep up with the growth, Planning Director Chris Jacques said.

“We’re trying to be a community with healthy neighborhoods,” he said.

The proposed plan could help pave the way for more trendy development and sought-after jobs.

The plan lists six key pillars that would guide City Council decisions in the future:

Arts, culture and recreational enrichment. The plan calls for promoting historic preservation and placemaking initiatives, increasing outreach at city libraries and investing in amenities such as the Peoria Center for the Performing Arts.

Economic prosperity. This focuses on finding land for workforce housing and businesses and bolstering the connection between the workforce and education.

Smart growth. This promotes walkability and connectivity between public transit and walking or biking paths. It aims to partially undo the “negative impacts of decades of post-World War II suburbanization” that’s led to traffic congestion and dependence on cars, according to the plan.

Peoria in recent years has taken several steps toward the goals laid out in the proposed general plan, from planning mixed-use development in historic Old Town, to experimenting with public transit options, to promoting open space by launching the massive new Paloma Communtiy Park. 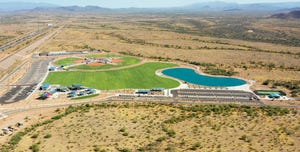 City leaders have worked to revitalize Old Town for years and the proposed general plan lays out steps to bolster its public art and sense of place.

In 2019, Peoria students partnered with the city to paint in several Old Town intersections in a bid to give the area a sense of place and break out of the beige mold that covers much of the Valley’s suburbia.

The City Council early this year OK’d preliminary plans to bring a mix of development, from boutique shops and restaurants to dense housing, to Old Town Peoria, the city’s downtown area off Grand Avenue. One of the owners of the Churchill, a trendy downtown Phoenix spot, came on board for the project.

The city has also moved to bring a face-lift to Grand Avenue in the form of housing and a medical center.

And the changes aren’t just planned for Old Town.

After nearly a decade of planning, the city inked a tentative deal, through a partnership with a developer known for its work around the Seattle Seahawks stadium, to fill out the remaining empty pockets in P83, the city’s dining and entertainment district, with high-density housing, a full-service hotel, office space and retail near its spring training fields.

The proposed general plan calls for leaders to continue to foster a walkable “live-work-play” environment in areas such as P83.

“We’ve got a lot of great assets, but I know there’s an interest to realign the community a little bit from a bedroom community,” Jacques said.

On the public transit front, Peoria in 2019 launched a free-to-ride circulator bus, dubbed POGO, that connects the rapidly growing north Peoria to the busy P83 and Arrowhead Towne Center areas.

The City Council has discussed adding routes that could stretch across the city, as well.

City leaders know the West Valley is growing rapidly and they say attracting employers in targeted industries is key to making sure that growth is sustainable.

The city has set its sights on specific types of development and occupations that should cut down on the need to commute outside the city for work, Jacques said. Those developments and industries include:

The city has already made progress in attracting more healthcare, from the forthcoming Valleywise Comprehensive Health Center set to open next year near Old Town, to the 44,000 square-foot Desert Harbor Medical Commons healthcare facility slated to open late next year off 91st Avenue and Thunderbird Road.

Most of Peoria’s largest employers currently are in the service industry.

Peoria’s largest employers are the Peoria Unified School District and City Hall, according to city documents. Its largest private-sector employer is Fry’s grocery stores, followed by Walmart. Together the two supermarket chains employ about 1,100 in the city of some 172,000.

McDonald’s is the city’s eighth-largest employer, with about 300 employees, according to city documents.

“We want to continue to move to where we can be economically more diverse,” Jacques said.

Peoria is already a big city among the West Valley suburbs, but it still has a lot more room to grow.

The city’s growth has been moving north for years and it’s starting to creep up on Lake Pleasant. The north end of the city also has some of Peoria’s most expensive homes, which can approach $1 million.

City leaders for years have acknowledged a missed opportunity with the Loop 101 freeway. Peoria used much of its land along the 101 for residential development — aside from the freshly renovated Park West shopping center and P83 district.

“We screwed the pooch. … That’s where businesses want to locate,” then-Peoria Mayor Bob Barrett said in a 2014 Arizona Republic article.

Neighboring Glendale has capitalized on its freeway proximity to build the Westgate Entertainment District, the West Valley’s first Topgolf and a growing luxury car hub.

A good deal of Peoria’s rapidly growing north end is still pristine desert, making it something of a blank slate, Roe, the north Peoria resident, said.

“We’re growing so fast residentially that we need more of everything,” she said.