The department is changing how no-knock search warrants are authorized, increasing its use-of-force reporting requirements and training officers to step in if a colleague is using excessive force or is acting out of policy, police Chief Sean Duggan told the City Council during an Oct. 15 presentation.

Duggan said the department is in a “constant state of reform” and the changes are in response to national discussions about policing as well as recommendations issued by the White House on safe policing and building public trust.

Police departments across the country are facing a reckoning amid protests spurred by police brutality against minorities.

The deaths of George Floyd, Breonna Taylor and others have become a rallying cry for Black Lives Matter and social justice movements pushing for police reform. They have forced law enforcement leaders to rethink how they interact with the community and to adjust department procedures, from banning the use of chokeholds to the use of no-knock search warrants, in which officers enter a property without first announcing their presence.

Those calls for change haven’t necessarily made it to Chandler, where residents are majority white and conservative and where there is strong support for the Police Department.

Still, Duggan told the council that the department is aware of what’s happening and is using it as an opportunity to grow.

“We are not standing still. We’re certainly paying attention and we’re committed to being a leader in our profession,” he said.

Community and faith leaders said the changes are a step in the right direction and that they are confident Duggan and his department would be open to discussing further changes, if necessary.

Here’s a look at what the department is working on.

The department will require that no-knock search warrants, like those used by Louisville, Kentucky, police in the Breonna Taylor case, be approved by the police chief’s office.

These types of warrants are legal in Arizona and must be authorized by a judge. Duggan said they are rarely used by Chandler police.

“We have added a whole different level of accountability and oversight to that to ensure that all other options are explored before a no-knock warrant is sought,” he said.

Chandler police will require that when officers take a person down to the ground during an arrest that the person is brought back to a seated or upright position as soon as possible to avoid obstructing their breathing.

Duggan said this is taught in training but has never been explicitly written into the department’s policy. It will become an expectation, he said.

Chandler police are preparing a definition of de-escalation that will be included in the department’s policy manual.

Duggan said de-escalation is something that has been discussed at length over the past few years but the department didn’t have a succinct definition. This definition could help better frame discussions about de-escalation and training.

The department also has increased its oversight of use-of-force incidents.

Officers who use force while on duty must fill out a form documenting the incident and the type of force that was used.

The form must be reviewed by every level of the department, up to the chief’s office. Prior to this, reports were reviewed by the precinct commander but not by top-level department administrators.

The change, which was implemented earlier this summer, is designed to increase accountability and transparency, Duggan said.

In addition to sending investigators, the department plans to send a training sergeant to the scene after an in-custody death or an encounter in which an officer fires a weapon. The training sergeant will look at what happened, what type of training the officer received and what tactics and equipment were used and recommend any necessary changes.

Duggan said this would allow the department to be more nimble and more quickly implement procedural changes while an incident is under investigation, which can take weeks or months to wrap up.

Chandler officers will receive training on “duty to intervene” policies, which require officers to step in if another officer is using excessive force or doing something that is against policy.

Officers are already required to intervene per department policy, but no training had been provided in the past.

Under the department’s policies, officers must intervene in cases where they observe another officer “using force clearly beyond what is objectively reasonable” and they are required to report the incident to a supervisor.

Now, officers will be conditioned to step in, Duggan said.

“It would become an expectation and really ingrained in the culture of the department,” he said.

The department is adding a resident to its training committee made up of sworn officers and professional staff and is expanding the committee’s work.

The committee helps identify training needs and schedules training for officers throughout the year.

Duggan said having a resident on the committee will help bring a different perspective to the table and “demonstrates that we are transparent and open.”

“It’s very important to have that engagement in the community,” he said.

The committee also will be responsible for looking at incidents involving police and protests across the country through the lens of a Chandler officer to see how the department would have responded to a similar incident locally.

“It gives us another opportunity to learn and grow,” Duggan said.

Detective Zachary Waters, a department spokesperson, said the changes being rolled out weren’t pushed by any specific group but are part of a broader effort to provide better services.

The department boasts strong support from residents, and it hasn’t been rocked by high-profile excessive force incidents as have neighboring Mesa and Tempe in recent years.

The department has been focused on increasing community outreach efforts and transparency in the past few years, Waters said. 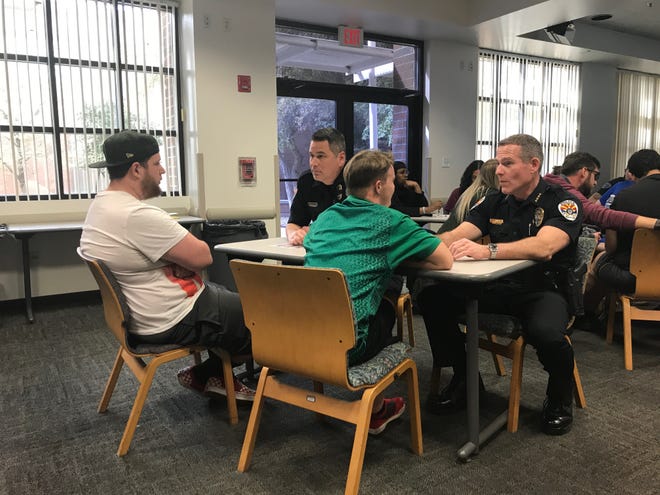 The department has a citizens’ review panel that reviews all police shootings, excessive force incidents that result in serious injury or death and citizen complaints. It also has an LGBTQ liaison position that works with residents.

“We strive to create positive relationships with our community,” Waters said, and he added that these efforts help the department “gain the trust and support of our community members.”

Duggan and command staff regularly meet with groups like the East Valley NAACP and neighborhood groups and have met with community and faith leaders throughout the summer to discuss policing in the community, Waters said.

Victor Hardy, president of Chandler Men of Action, an all-male African American group that works to provide positive role models for youth, said Duggan has shown throughout his time as chief that he is willing to meet with residents and have tough conversations.

Chandler Men of Action includes current and former law enforcement officers and first responders. Members sat down with Duggan and Hartke in early June to discuss Floyd’s death and protests.

It’s just one of several conversations members have had with the chief, said Hardy, who is also a pastor at Congregational Church of the Valley and executive director of For Our City Chandler, a network of faith-based organizations that work to provide help to residents and improve the community’s well-being.

He said the changes the department is implementing are appropriate for the type of calls and incidents Chandler police respond to and they are reflective of what’s going on nationally.

“This department has made a considerable amount of changes to its policies, and this is a step forward from where many other departments are at,” Hardy said.

Roy Tatem, a Chandler resident and president of the East Valley NAACP, said the group is satisfied with the changes.

Tatem said he has had a number of more private conversations with the chief about policing over coffee and on Zoom. Command staff has met with the East Valley NAACP’s Criminal Justice Committee, and Duggan attended a meeting this summer with the organization to discuss police brutality.

Tatem said the changes and conversations show that the department “is willing to be proactive and responsive to the legitimate concerns of the community.”

“I am confident that if we identify additional issues that need to be addressed that we have the ability to raise those concerns and begin the process to address those issues,” he said.