New cleaning methods implemented by airlines to disinfect aircraft against the new coronavirus are effective, according to a newly released report by the University of Arizona’s Department of Environmental Science and Boeing.

This study tested the cleaning methods used on flights to validate whether those methods were indeed effective in eliminating the virus not just in the cabin, but also on the flight deck and cargo compartments. The idea was to make sure cleaning protocols are providing a virus-free environment at the time of boarding, thus eliminating one potential source of transmission of the virus between flights.

What it takes to clean airplanes during the pandemic 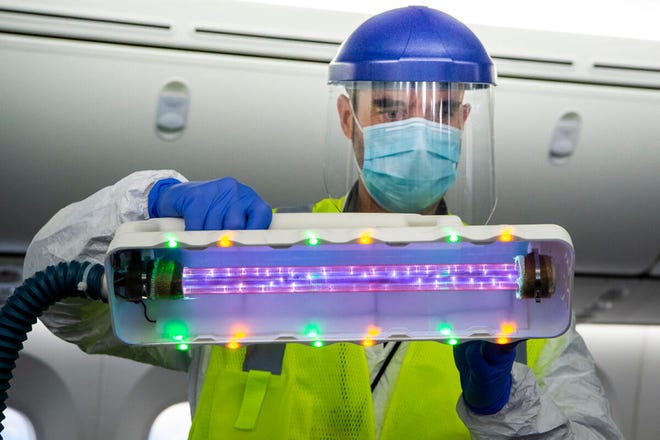 Frequent cleaning of aircraft is just one aspect of the layered safety approach the airlines have adopted to combat the transmission of the coronavirus. Some of the other precautions to prevent spread include instituting touchless technology, utilizing the plane’s HEPA air filtration system to remove the virus from the air, urging passengers to stay home when sick as well as encouraging the use of masks while onboard.

Layering these precautions allows more opportunities to eliminate the virus and prevent its spread.

“It (COVID-19) is a safety threat to passengers within the air travel system and so we defend against threats through layered protections, be that cybersecurity, be that physical security or in this case, health security,” said Tom Sanderson, Boeing’s director of product marketing.

How the University of Arizona study was conducted

In the study, touted as the first of its kind, scientists from University of Arizona placed a surrogate live virus, the MS2 virus, on touch points like tray tables and seatbacks around a Boeing 737 aircraft at Boeing Field in Seattle. MS2 is commonly used in scientific studies because it is harmless to humans.However, Boeing said it was the first time they have used it on an aircraft. 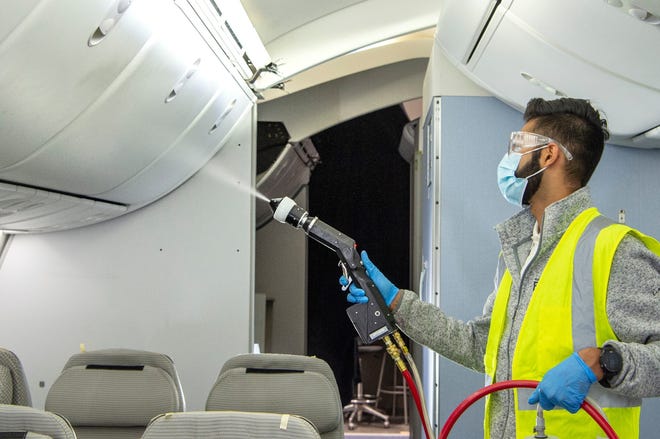 Charles Gerba, a professor and microbiologist with the University of Arizona, said scientists chose to use the MS2 virus for two key reasons: Humans cannot contract it, and it is more resistant than the coronavirus. That means if the cleaning methods could kill MS2, the same methods would also eliminate the coronavirus.

“It’s really exciting working on this project because we’re actually having to put a live virus in an aircraft, then demonstrate we can inactivate and kill this virus,” Gerba said.

One of the benefits of testing a live virus on an aircraft in the field, Gerba said, is that scientists can observe how those cleaning methods will perform on multiple surfaces.

After the virus, which is harmless to humans, was applied, a Boeing cleaning crew that was unaware of the test came in and applied currently used airline cleaning methods which include chemical disinfectants, electrostatic spraying, antimicrobial coatings and Ultraviolet wands.

Scientists then swabbed 230 locations around the aircraft, packed those swabs in a cooler and overnighted them to the University of Arizona laboratory for testing.

In the end, scientists found all of the cleaning methods were effective in eliminating 99.9% of the MS2 virus.

Scientists also took parts of the aircraft and, in the lab, applied the new coronavirus to those surfaces and performed additional testing, to make sure that the MS2 virus was more resistant than COVID-19 on those surfaces to give confidence in the results of the study that cleaning processes that kill MS2 will also kill COVID-19.

“Data is pretty much confirming what we learned in the aircraft here in the laboratory,” Gerba said.

Boeing chose to work with the University of Arizona based on its reputation as a leader in the field as well as the university’s lab capabilities.

“We did our homework to try and find the leading academic institutions who we knew were very educated about the virus, but also had lab capabilities and access to COVID-19 virus and other surrogate viruses,” said Bryan Moran, Boeing’s Confident Travel Initiative Clean Airplane Program Leader. “That led us to the University of Arizona. It just kept coming up.”

Though the study was launched to test cleaning methods to prevent the transmission of the coronavirus through surfaces on aircraft, it could have broader implications on protecting public health.

“It’s important to recognize we’re not only talking about SARS-CoV-2, but also other viruses and microorganisms,” Gerba said.

Boeing and the University of Arizona said they will to continue to work together to study other new technologies related to health safety like the use of thermal disinfection on aircraft.