When Jazmin Sears quit her job to focus on her catering business earlier this year, she was excited to unleash her passion for cooking. She had been catering parties and events for a few years and wanted to make it her full-time gig.

Then the pandemic hit. Sears, who goes by “Jazz,” lost her first big catering contract, one she thought would provide her regular business.

The future of her now full-time catering company, which had been booked months in advance, looked grim.

But Sears quickly made a pivot in March: a liquor store owner she knew in Laveen said she could sell food out of his parking lot with her taco cart.

And so, the birria business was born.

AZ Taco King, the parking lot version, drew visitors from far and wide. “People were sitting in lines for three hours, coming from Tucson, Maricopa, Casa Grande,” she said. They were all just waiting to get a taste of her birria de res, a Mexican beef stew with dried chiles and flavorful broth.

When there got to be too many people for the drive-through liquor store parking lot (one day the line of cars was so long it caused an accident, she said), Sears and her husband Samuel decided to start the brick and mortar location of AZ Taco King in Phoenix.

They opened the new restaurant at the end of August, and in just under two months Sears said there are already days where they sell out of birria before closing time.

“Every week it just keeps getting better and better,” she said. 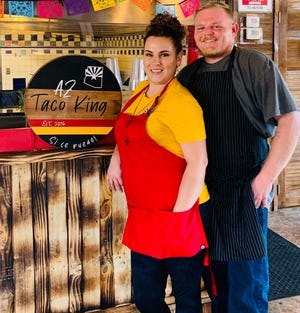 What’s on the menu at AZ Taco King?

AZ Taco King also offers up other meats such as carne asada, carnitas and barbacoa for street tacos, quesadillas and “king burros.”

As far as beverages go, there’s daily-made agua fresca and horchata to pair with your birria of choice.

Why you have to try the signature quesabirria

One thing to know before trying AZ Taco King: it’s usually pretty busy, according to Sears. On a recent Sunday around 12:30, only 30 minutes after the restaurant opened for the day, it was already fairly crowded for dine-in and takeout.

The food typically also takes at least 20 minutes to prepare, so factor that into your time when planning a visit to the restaurant. Sears said customers can call in orders in advance, but sometimes the family-run operation is so busy they don’t have a chance to pick up the phone. The best way to order food is to come inside and then wait in your car for someone to bring it out when it is ready.

While I waited for my food, I enjoyed the two drinks of the day, horchata and watermelon agua fresca. The agua fresca with chunks of watermelon was refreshing and not too sweet while the horchata de arroz was also fresh and flavored with cinnamon sticks. I see no reason to choose between the two drinks — order both.

After trying the birria, it’s easy to understand why people waited in their cars for three hours in the hope of tasting this dish. The quesabirria taco dipped in the delicate consomé (which some people call “the dip,” Sears said) is one of the best taco experiences I have ever had. Don’t skip the dip, but don’t forget you need to ask for it on the side.

The shredded meat inside the taco is remarkably tender and juicy after hours of stewing. While the chiles add rich flavor, it packs only a mild heat. With the quesabirria overflowing with gooey melted cheese, some of it gets crispy on the edges from the grill. These tacos are accompanied by classic toppings of onion and cilantro with spicy salsa. One quesabirria is a little bigger than a street taco, but still small, so order at least two or you might be disappointed.

The birriafries are also a must-try. I ate this giant pile of French fries smothered in birria, cheese, onion and green salsa while watching football and I could scarcely think of a better plate to enjoy while having a lazy Sunday at home. Just be sure to save some of the consomé to dip the fries in too.