Normally, local ads punctuate your TV time to the point that many Arizonans can recite jingles for certain businesses, like Lerner and Rowe (is the way to go) and Express Flooring (is the best) and London Gold (it’s also the best).

But these days, with Arizona newly a swing state and one of the most high-dollar U.S. Senate races in the country, political ads fill our airwaves at prices that local businesses — and even local campaigns — can’t really compete with.

A flood of political spending has saturated Arizona, with TV ads running constantly from both presidential candidates, U.S. Senate candidates and the political action committees that support any of the above.

For example, the Oct. 17 episode of Saturday Night Live showed a smorgasbord of political commercials, including ones supporting Tom O’Halleran, Donald Trump, Joe Biden, Hiral Tipirneni, and Martha McSally (with an anti-McSally ad following right behind). The candidates’ ads cost between $2,500 and $5,000 during that show, depending on slot and duration, orders filed by the station to the Federal Communications Commission show.

One projection of spending on political ads in Arizona this year puts the figure at more than $200 million.

What’s a personal injury attorney — or local restaurant chain or jeweler or mattress company or flooring company — to do?

“I pray that November 3 hurry up and comes,” said Kevin Rowe, of personal injury law firm Lerner and Rowe. “I would love to see competitors’ ads. I’d rather see that than see the negative stuff coming from the politicians right now.”

During the political window, starting two months before the general election, many pivot elsewhere. Some don’t increase the amount they spend on TV, which means they often get bumped from good slots by political campaigns willing to pay more.

And they find the political ads as annoying as many ofthe rest of us do, so they don’t think it’s a good use of money to pay more at a time when people are put off by TV.

“The influx of political ads is like nothing I’ve personally ever seen,” said Ari Levenbaum, the chief operating officer for the American Association of Motorcycle Injury Lawyers, known to Arizonans as the Law Tigers.

Building a recognizable brand requires regularly putting your name in front of people, Rowe said. The expensive TV market in Arizona during this political window makes that a bit more difficult.

“You may not need us right now. God forbid, you may need us in the future, hopefully no one ever does. But if you’re in an accident, the first name you think of about being in an accident is those two dummies on TV, and then they call us,” Rowe said.

Various rules govern how political spending on TV operates during an election.

Starting 60 days before a general election, and 45 days before a primary, federal law puts in place a “political window” for TV advertising.

During that time, candidates must be provided equal opportunities and access to run ads on television. This time period also includes “lowest unit rates,” where candidates pay the lowest rate given to any other advertisers for a period of time.

These rules seek to ensure fairness, so that one candidate isn’t given free or cheaper airtime than another.

The exact price of a single ad is highly variable, depending on time, length, whether it’s during a live broadcast, the channel’s reach.

But that price is definitely higher during the political window, especially in a place with several high-profile, well-financed, close races. 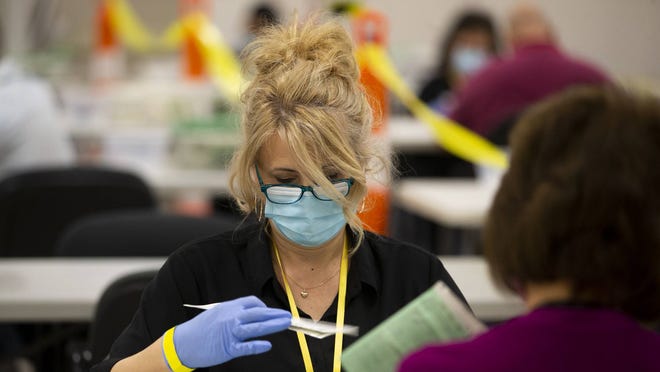 A 30-second spot for Tipirneni on the local Channel 12 show Sunday Square Off recently cost $375, orders filed with the FCC show. For a McSally spot on Sunday Night Football, the price was significantly higher, at $15,000. A 1-minute Kelly ad during The Voice was $26,000.

“Boy, if I was a local company, television in this political cycle is just complete no-go,” said Scott Harkey, founder and managing partner of OH Partners, an advertising agency based in Arizona.

It’s not just local businesses: Local races or others that aren’t as well-financed as some of Arizona’s most competitive contests can’t afford to get on TV either, Harkey said. Facebook ads also are more expensive than in previous cycles, he said.

Businesses’ ads often get preempted by political ads willing to pay more, several told The Republic. So, the businesses may be willing to pay up to a certain amount, but if a higher bidder comes in, their ad won’t run, and their money gets returned.

“If you see a personal injury ad, someone got a deal spot. If you see a national advertiser or a national political ad, you know that’s expensive inventory,” Harkey said.

Rowe, of Lerner and Rowe, turned on the TV to watch the presidential townhalls last week, and was surprised to see one of his firm’s ads. The channel must have had an open slot, and the Lerner and Rowe ad got thrown in, he said.

“It’s still our same rate, we’re not paying any more. They just threw us in that spot because there’s an open spot,” he said.

What campaigns are spending

This election, Arizona became one of the states with the highest amounts of political spending.

One report from Advertising Analytics projected political ad spending in Arizona to amount to $218 million in revenue this year, across TV, radio and digital. It was one of three markets, alongside Philadelphia and Atlanta, to crest $150 million in the company’s projections.

The Arizona U.S. Senate race ranked as one of the most expensive such campaigns ever, according to CNN.

TV stations file reports with the Federal Communications Commission, showing what each candidate has purchased by date, time and cost. The costs to run an ad are all over the place: Sometimes, it costs a couple hundred dollars and sometimes several thousand.

Joe Biden’s TV ad spending has outpaced the Trump campaign’s, with Biden spending $56 million to Trump’s $32 million from Sept. 28 to Oct. 11 nationally, according to the Wesleyan Media Project.

Three Florida cities saw the most presidential race spending during that time, followed by Philadelphia. But Phoenix rounded out the top five, according to Wesleyan’s research on the Sept. 28 to Oct. 11 time period.

Arizona’s Senate race had the sixth-most airings and third-highest spending for senatorial political ads nationally during that time period.

How businesses are pivoting

Local businesses saw the wave of political spending coming earlier this year. They planned around it.

Elections happen regularly, so the rules and peculiarities of TV ads during a political window aren’t foreign, but the level of spending and interest in Arizona this year is new.

There’s a finite amount of space on TV, and a lot of interests competing for it, some of whom have much more money to spend than a local business, said Levenbaum, of the Law Tigers.

“It’s always been a challenge, and we’ve been doing this 20 years, but it seems to become more prevalent, more pervasive because there’s just so much more money in politics,” Levenbaum said.

Typically, local businesses may shift to other advertising options, like billboards or radio. But people aren’t leaving their homes as much because of COVID-19, which means those avenues aren’t as strong right now either, Harkey said.

A few businesses said they have other arrangements with TV stations to sponsor certain segments, like traffic or weather, which don’t get bumped by political ads.

Rowe said his TV budget is set; he’s not spending any more to compete with political ads. So if he gets bumped from a time slot, he gets bumped. But he believes people are tired of watching all the political ads, so he doesn’t want to sink money into the medium right now. If his spots get bumped and he gets refunded, he’s not always putting that back into TV, he said.

“I don’t know about you, but I’m not even watching network TV anymore. It’s just so negative. And I believe a lot of people probably feel the same way I do, that it’s just so in your face, over and over and over again, that they’re turning off to it, so we don’t want to keep throwing our commercials back in,” Rowe said.

Eegee’s, the sandwich shop beloved by Tucsonans that will soon enter the Phoenix market, decided to diversify away from TV earlier this year, in part because of the expected costs of running ads during the political window in a new swing state, said Paul Hemingway, the company’s chief marketing officer.

“You just knew with an open senate seat here in Arizona, the Trump-Biden war that was brewing, that it was either going to be prohibitively expensive, or there was a high likelihood that you would get bumped,” Hemingway said.

The company grew its social media presence and invested in digital ads and microtargeting instead, he said. Nothing quite approaches the reach of TV, but the strategy is working so far, he said.

Still, local businesses will be here after the election ends to run ads they need, unlike the campaigns.

“We’re there year in, year out, and that’s the frustrating part, we’re loyal, we advertise. And then you get these political entities that can come in and just blow us out,” Levenbaum said.

They’ll continue to use TV after the election is over for the same reason the campaigns favor it: It’s an effective way to get their message out.