Holiday celebrations in Glendale will look different this year because of the COVID-19 pandemic.

The annual Hometown Christmas Parade has been canceled and Glendale Glitters will be significantly scaled back, featuring the signature 1.7 million holiday lights but no lighting ceremony, street vendors or performers.

“It was an incredibly difficult decision, but a necessary one,” Glendale Mayor Jerry Weiers said in a written statement announcing the parade’s cancellation. “I want to thank everyone for their ongoing efforts to keep our community healthy. I know COVID-19 has made many changes in our lives and I want to thank you for your continued patience.”

Although the parade is canceled, the associated food drive is still going. Donations support the Phoenix Rescue Mission’s Hope for Hunger initiative.

Donations of non-perishable food can be dropped off at Glendale City Hall in November and December. Donations also can be made from 8 a.m. to 6 p.m. at the Sam’s Club and Walmart at 83rd Avenue and Union Hills Drive.

No Glendale Glitters ceremony, but lights will be on….. 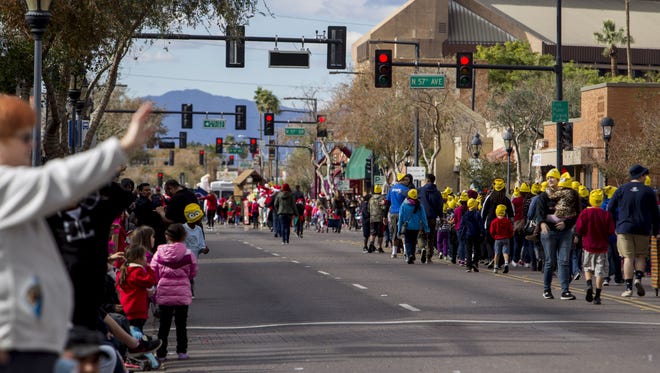 Glendale Glitters, a holiday tradition in metro Phoenix, will be significantly scaled back. Festive lights will still illuminate 16 city blocks and downtown Glendale and businesses in the area will still be open, but the usual festivities have been called off.

The Glendale City Council at an October workshop discussed whether to pivot Glendale Glitters to a virtual event or something more low-key.

Proposed plans ranged from videotaping a lighting ceremony with performances to a Facebook Live video of Weiers and the City Council flipping the switch to turn the 1.7 million lights on.

“I would prefer, more than anything, just turn the lights on and let people show up,” Weiers said at the meeting. “We don’t want to discourage people from coming out. We just don’t want the mass crowds.”