President Donald Trump faced searing criticism from Joe Biden for his “absolutely tragic” handling of the coronavirus pandemic during Thursday’s final debate of the tumultuous campaign as the Republican sounded an optimistic note about a disease he insisted was on the decline.

The clash over the pandemic highlighted a showdown that featured several heated exchanges but few of the fiery interruptions that dominated the first chaotic debate earlier this month. Polls in Georgia and across the nation show the COVID-19 outbreak and its resulting economic fallout is the dominant 2020 issue, and the two offered competing visions of how to defeat it.

The former vice president warned of a “dark winter ahead” of rising infection rates, and he said the mounting death toll from the disease should cement Trump’s defeat in November. Somberly mentioning the disease’s death toll of more than 220,000 Americans, Biden asserted that “anyone responsible for that many deaths should not remain” in the White House.

Trump maintained a sunnier outlook as he defended his administration’s handling of the deadliest health crisis in more than a century, and he repeated claims that a yet-to-be released vaccine for the disease is weeks away.

The tangle over the COVID-19 outbreak shaped a face-to-face debate that might have been the president’s final chance to transform a reelection campaign that could be slipping away from him.

Polls show Trump trailing Biden both nationally and in battleground states, and Thursday’s debate provided a moment guaranteed to draw the attention of tens of millions of voters with less than two weeks remaining in the contest.

It opened with an understated tone unlike the cantankerous clash from earlier this month, when Trump interrupted Biden so frequently that debate organizers installed a virtual “mute” button to maintain order during Thursday’s debate.

Still, for the broad majority of Americans, the debate’s back-and-forth won’t have any bearing on their decisions. In the heat of a polarizing race, polls show only a small number of Americans still up in the air over the White House race, including about 2% in recent Georgia surveys. 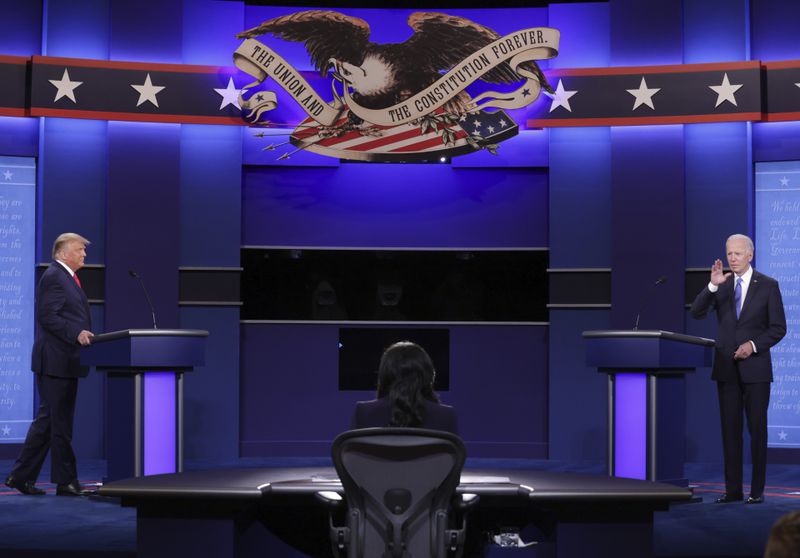 Trump sought to portray a sense of control over the still-raging pandemic, saying that Americans are “learning to live with it — we have no choice.”

“More and more people are getting better,” Trump said at one point, adding that sweeping economic restrictions threatened more harm than the virus. “The cure cannot be worse than the problem itself.”

“They’re all the United States,” Biden said. “And look at all the states that are having a spike in he coronavirus — they’re the red states.”

Trump entered with a mission to rebound his standing in polls and put Biden on the defensive, while the Democrat aimed to focus attention on the pandemic and its resulting economic fallout. Among his invited guests was Atlanta Mayor Keisha Lance Bottoms, one of his earliest high-profile supporters.

But the head-to-head matchup also took a personal turn, as Trump invoked an unconfirmed New York Post report that claims the former vice president received funds from Russian sources and demanded that Biden give “an explanation to the American people.”

Flashing a hint of anger, Biden responded that he has “not taken a penny from any foreign source ever in my life,” and he declared the talk about his son Hunter Biden’s struggles “malarkey” before turning directly to the cameras.

“It’s not about his family and my family,” Biden said. “It’s about your family. And your family is hurting badly.”

Swinging back, the Democrat referred to a New York Times reportabout Trump’s financial struggles, challenging the president to “release your tax returns or stop talking about corruption.”

As he’s asserted since his 2016 campaign, Trump said he would release his returns as “soon as we can” but that he won’t do so while he’s under audit. There are no restrictions that ban him from releasing the documents during an audit. 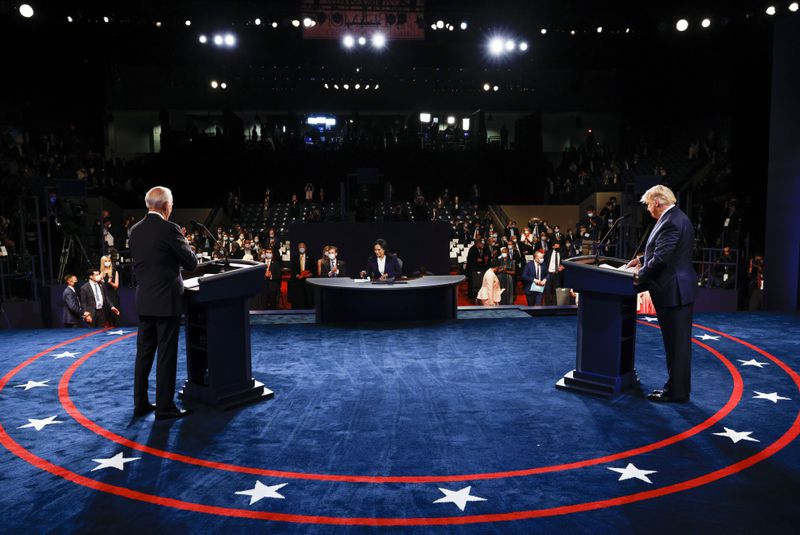 After the ugly first showdown, the Commission on Presidential Debates announced that both candidates would have their microphone cut off while the other delivers a two-minute answer on the six featured topics. The “mute” button didn’t apply to the open discussion portion of the debate.

A second debate that was to air last week was scrapped after Trump’s coronavirus diagnosis triggered the commission to announce it would have been held virtually. Trump pulled out of the event, and instead, the candidates held dueling town hall meetings on competing television networks.

One of the sharpest exchanges unfurled during an extended dialogue about the movement for racial justice, with Trump claiming his rival failed during four years as vice president to combat institutional racism.

“You’re all talk and no action, Joe,” said Trump, who has frequently claimed he’s the best president for Black voters since Abraham Lincoln. That brought a mocking retort from Biden, who seemed to catch Trump off guard.

“Abraham Lincoln here is one of the most racist presidents we’ve had in modern history,” Biden said. “He pours fuel on every single racist fire.”