Democratic vice presidential nominee Kamala Harris speaks Friday during a drive-in rally in the parking lot at the Ray Charles Performing Arts Center on the Morehouse College campus in Atlanta. Harris’ visit was aimed at encouraging stronger turnout for early voting, but also to shore up support among Black men.

During a pause in a busy itinerary Friday, vice presidential nominee Kamala Harris was confronted with a question on an issue that’s sparked much concern among Democrats in the closing stretch of the race for the White House.

The query came from music mogul Jermaine Dupri, who asked what she tells those worried about her background as a prosecutor who “put a lot of Black brothers away in your past.” Making her first visit to Atlanta since joining the Democratic ticket, Harris answered with an extended monologue aimed squarely at President Donald Trump’s attempts to woo Black men.

Trump, she said, pushed “the theme that the first Black man to be president of the United States was illegitimately there.” And, she continued, he “has referred to Black women by words I will not repeat here — and I’m not talking about myself.”

Then she added: “Donald Trump, who in the last debate, stood on the debate stage and refused to condemn white supremacists” — a reference to his call for the far-right Proud Boys to “stand back and stand by” during the first showdown of the presidential nominees.

The California senator’s visit was aimed at rallying Democrats to cast their ballots early and join the record number of voters who have already done so.

But it also doubled as an effort to shore up support among Black men, who have recently been the focus of a sustained Trump effort in Georgia. The president held a “Black Voices for Trump” rally in Atlanta in September, and his supporters emphasize a criminal justice overhaul he signed into law.

The overwhelming majority of African American voters in Georgia are expected to cast their ballots for Joe Biden, and it will likely require high turnout from Black voters to flip the state in Democrats’ favor for the first time since 1992.

But some recent national and statewide polls suggest Black men could vote for Trump at higher rates this cycle than they did four years ago, which could undercut Biden’s efforts to carry Georgia and other competitive states. 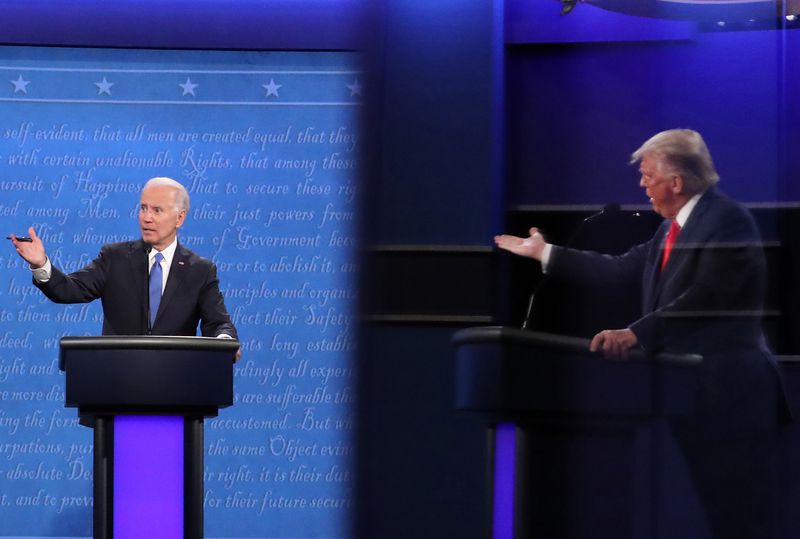 About 11% of Black men are leaning toward Trump in the latest Pew Research data, and some Georgia surveys show a relatively high number of undecided Black voters.

Trump has tried to sow doubts by invoking Biden’s vote on tough-on-crime measures in the 1990s that led to higher incarceration rates. He brought up the issue at Thursday’s debate, telling Biden that Black men “remember that you treated them very, very badly.”

“Just take a look at what’s happening out there,” the Republican said.

During a string of events in Atlanta on Friday, Harris pushed back on that narrative while assailing Trump’s handling of a coronavirus pandemic that’s killed more than 225,000 Americans and has disproportionately affected Black voters.

“The people of Georgia deserve to have a president who sees them, who cares about them,” Harris said shortly after stepping on the tarmac at Hartsfield-Jackson International Airport. “Georgia has been so hard hit by the pandemic.”

But her most significant moment came when Dupri asked the question — in a friendly, supportive fashion — during a roundtable discussion at the Gathering Spot, a popular Atlanta business club.

She promised the group that she understood the challenges Black men face and said she’d fight to decriminalize marijuana and press for other overhauls. And she cast her work as San Francisco’s district attorney as an effort to fix an inherently “flawed” system.

“Yes, I was a prosecutor,” she said. “I decided to go in a system that I knew was flawed to reform it. Yes, I decided to go up the rough side of the mountain, as we say in church. And I didn’t fix the entire system.”

Democrats hope Harris, the first woman of color on a major party’s presidential ticket, will energize Black voters who form the backbone of the state’s Democratic Party. More than 2.3 million Georgians have already voted, and overall turnout is expected to surpass 5 million — smashing a state record.

Republicans, too, are trying to turn Harris into a mobilizing force for conservative voters.

At a Sandy Springs rally on Friday, Donald Trump Jr. claimed left-leaning forces — including Harris — are using Biden “like camouflage to sneak in this radical Marxist agenda.” And he echoed one of his father’s favorite attacks on the Democrat.

“He’s going to fix racial relations in America?” he said of Biden’s plans to address racial injustice. “I think it’s a wonderful cause, but why did you wait 47 years, Joe?”

Harris’ visit was capped by a socially distanced drive-in rally at a parking lot at the Atlanta University Center, where dozens of supporters clustered around their cars and blared their horns to welcome her as she took the stage.

She brought up Trump’s orders restricting travel from several Muslim-majority countries, his comments that there were fine people on “both sides” of the violent 2017 clashes in Charlottesville, Virginia, and his promotion of the false “birther” conspiracy that Barack Obama wasn’t born in the U.S.

“People have asked me, do you think he’s a racist? Yes. Yes,” she said. “Because it’s not like it’s a random one-off. We’ve seen that pattern.”