Two separate car washes were held Saturday in Mesa to raise money for the victims of a drive-by shooting near Dobson and Guadalupe roads that left one dead and six others injured.

Though more than a week had passed since the Oct. 16 incident, the shooter or shooters remained on the loose as of Saturday morning.

The first fundraiser started at 8 a.m. next to a Filiberto’s Mexican Food restaurant near Mesa Drive and Southern Avenue.

Among the more than a dozen people volunteering at the fundraiser was 33-year-old Jessica Guzman, who said she’s known the Duran family for about 10 years. She sees the Duran children, 16-year-old Edgar Duran, 6-year-old Citlaly Duran and 1-year-old Sebastian Duran as “like my niece and nephews.”

She said she’s still in “disbelief” about the shooting.

“To this day, I still think it’s a bad dream,” she said. “We want to wake up from this bad dream, but little by little it’s becoming a reality that we lost Sebastian and the other kids were also wounded.”

Guzman said multiple friends of the family came together to organize the fundraiser and promote it on social media, saying the community has been “very responsive” to their cause.

“They are loved — that family is loved,” she said. “Everybody, when it’s this type of hard times, is when everybody comes together, no matter what.”

Guzman wasn’t aware of the second car wash happening but said she was “encouraged” that there were multiple efforts to help the Durans.

The suspect fired on a crowd of people at a food truck event near Dobson and Guadalupe roads in Mesa on Oct. 16 before fleeing west on Guadalupe Road in a white Kia Soul or other box-shaped SUV, police said. 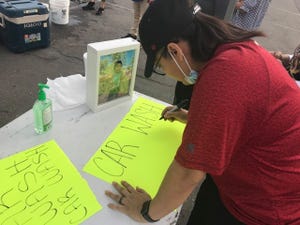 Four kids, the Duran children as well as 9-year-old Roselyn Ramirez, along with three adults were left with gunshot wounds. Sebastian Duran died from his injuries Sunday afternoon.

Guzman said they’ll continue hosting car washes and other fundraisers to help the family as long as it’s necessary, hoping that their efforts will allow the family to work through their grief instead of thinking about money.

“I know we won’t bring them peace, like healing for their loss but at least they won’t have that worry about, ‘how am I going to pay my finances?'” she said.

Ten minutes down the road, a second car wash was held in a parking lot near Mesa Drive and Brown Road. The volunteer cohort was made up of about 15 local vendors who said they felt personally affected by the shooting, which happened during a food truck event.

Sugie Garcia, 39, said she had another commitment that night but otherwise would have been there during the shooting as a vendor, and that the incident “hits home.”

“We are all connected and we are all a family, so we all look out for each other,” she said of the local vendor community. “When something happens to one of us, it happens to all of us.”

She’s close friends with the vendor who organized the event that night and has been in constant contact with her to reassure her that what happened is only the fault of the shooter.

“It can happen anywhere, anytime, anyplace,” she said. “We don’t have control over other people’s actions. All we can do is spread love, spread awareness, support each other, be there as a community and bring Arizona up.”

Like Guzman, she hoped the Duran family would feel the love from the public after going through the “worst imaginable thing possible.”

Garcia also wasn’t aware that there was another car wash happening 10 minutes down the road, but like Guzman, was encouraged by it.

“I think that that is amazing,” she said. “The community outreach is the most important thing. Nowadays, we all need love and support for each other, we need to be looking out for each other.” 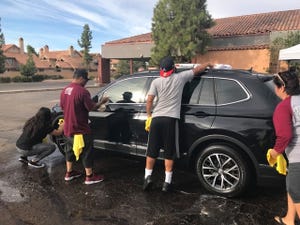 Garcia said she hoped the Duran family would find some source of comfort in knowing how much the community cares about their plight.

“We are here for you — you are not alone,” she said. “Be strong, we’re praying for you, we’re going through this with you, if you need anything we are all here.”

Lidia Hidalgo, 42, also showed up to volunteer despite not personally knowing the Duran family.

She said the large number of people who have given their time or money to help the family shows how much unity there is in the community.

“It’s beyond race or politics or anything like that, it’s just us coming together, seeing a family in need and doing what we think is the right thing to do,” she said.

Hidalgo said there was a lot of response to the event on social media, and that she hoped that would translate into lots of vehicles to wash on Saturday.

She said no matter what, though, they would be grateful for anything they got.

A GoFundMe to raise money for the victims had received more than $33,000 as of Saturday afternoon.