Arizona’s COVID-19 vaccine plan doesn’t say for certain who gets immunized first when vaccines roll out, but the working document suggests priority will go to a broad category of health care workers.

Officials with the Arizona Department of Health Services recently submitted its draft coronavirus vaccine plan to the U.S. Centers for Disease Control and Prevention, which was a requirement for all states.

The state plans were due Oct. 16. Arizona’s draft plan builds off a model it used during the H1N1 (swine flu) pandemic of 2009. Arizona’s plan will be updated as more details are provided to the state from federal partners, state health officials say.

A more detailed “operational” vaccine plan is expected to be completed further along in the process. State health officials say they don’t have a definitive date for when that plan will be released.

But experts say it’s unlikely a vaccine will be available until the end of the year, and many place wide distribution at sometime in 2021. To date, no COVID-19 vaccine has been approved by the FDA, either through the regular approval process or by emergency use authorization.

While more than one COVID-19 vaccine may become available, there might not be enough supply to initially go around. That’s why government officials need to consider who to immunize first, and the ways that they will distribute it.

The state plan references priority populations outlined in the CDC’s COVID-19 Vaccination Interim Playbook released in September, as well as guidance contained in a federal report released earlier this month.

Both the CDC playbook and the National Academies of Sciences, Engineering and Medicine report prioritize health care workers and first responders during the first phase of the vaccine rollout.

A state worksheet in the draft plan lists the priority order by category for receiving vaccines, before it would go to the general population:

1b: Other essential workers such as food industry workers, teachers and child care workers.

1b: People at increased risk for COVID-19 illness, including people age 65 and older.

2: People at increased risk of acquiring or transmitting the coronavirus, such as individuals attending colleges and universities and racial and ethnic minority groups.

2: People with limited access to routine vaccination services, including people with disabilities and people who don’t speak English.

“While target groups and prioritization tiers may differ somewhat for each local jurisdiction, this worksheet will assist in estimations and reinforce key planning elements,” Arizona Department of Health Services spokesman Steve Elliott wrote in an email.

The state plan, CDC playbook and NASEM report all reference health inequities that need to be addressed with the COVID-19 vaccine. Because of what it calls “systemic racism,” the Oct. 2 NASEM report says Black, Hispanic, American Indian, Alaska Native, and Native Hawaiian and Pacific Islanders have been disproportionately impacted by COVID-19 with higher rates of transmission, morbidity and mortality.

That’s why, the report says, any vaccine plan should take care to ensure it is “mitigating health inequities, manifesting equal regard for all, being fair and transparent, and building on the best current evidence.”

Logistical issues over transporting and storing the vaccine could drive decisions about what providers get the vaccine and where. The vaccine developed by Pfizer requires extremely cold conditions for storage — minus 103 degrees Fahrenheit, which has created a rush for extremely cold freezers, the Wall Street Journal recently reported.

The Arizona plan provides guidance for how officials will communicate with specific population groups and react to scenarios such as low vaccine supplies, and outlines the kind of demographic research they are doing to get ready.

“Once the CDC comes out with their recommended priorities for populations, then the state could build the operational plan, which would be the detailed plan,” said Will Humble, who is executive director of the Arizona Public Health Association and was state health director during H1N1. “This plan is about ‘how we’re going to make decisions.’ It isn’t the decisions that were made.”

The vaccines in clinical trials right now all require a booster, which is a second inoculation, so that has to be part of planning, too.

Arizona’s plan indicates county health departments will play a large role with the COVID-19 vaccine distribution, as they did during H1N1.

“It said a few things that were good. It said we will be including the county health departments in a lot of this planning and they will be accepting a lot of responsibility,” Humble said.

“At least they are promising in this report that it’s not going to be a top-down kind of thing, that the counties will be involved with a lot of the decisions and how to allocate in their communities.”

The Arizona plan pledges to “equitably” distribute a vaccine when it becomes available. The state says it is working closely with county health departments, as well as tribal and community leaders to make that happen.

“County and tribal partners will be instrumental in developing tactics for administering vaccine in hard-to-reach populations and congregate settings such as correctional facilities and homeless shelters,” the plan says.

“The initial target audiences will include priority populations such as health care personnel and first responders, but the overall community engagement strategy will aim to be inclusive of all population demographics throughout Arizona’s diverse communities.” 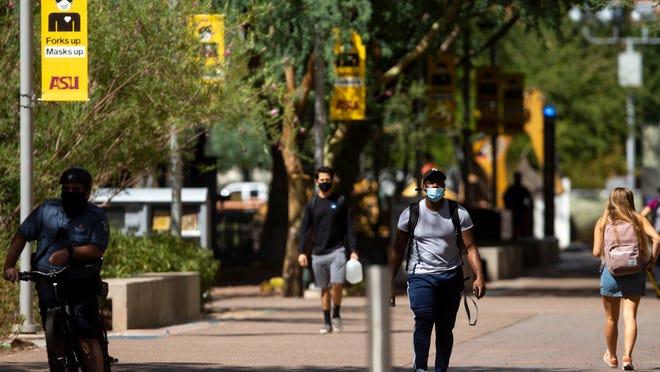 The plan also describes a partnership with Arizona State University that resulted in an analysis of people at high risk for COVID-19 complications, using hospital discharge histories, diagnostic codes and a vulnerability index that looks at factors like poverty and ethnicity that have been shown to be statistically associated with elevated COVID-19 death, diagnosis and hospitalization.

The analysis came up with 31 high-risk areas in Arizona that contain an estimated 54% of all Arizonans who would be at elevated risk of poorer COVID-19 outcomes, the plan says.

“I loved that they contracted with ASU so they’d get some GIS mapping of priority areas. Intuitively, I’d expect places like Guadalupe to pop to the top,” Humble said.

Public health officials will be able to use the mapping, for instance, to identify where they should set up mass vaccination events, Humble said.

A statewide advisory committee for the COVID-19 vaccine has been meeting since July and includes among its members representatives from Gov. Doug Ducey’s office, the Arizona Hospital and Healthcare Association, the Intertribal Council of Arizona, the American Academy of Pediatrics’ Arizona Chapter, and the Arizona Pharmacy Association.

“The Task Force has more than doubled in size since its inception in July. It is anticipated that it will continue to grow as additional partners are identified and as planning progresses to address specific issues with each phase of vaccine distribution,” the plan says. “Several large pharmacy chains participate in the weekly Vaccine Task Force and have already registered to be onboarded as a vaccine provider.”

Questions that the advisory committee could seek to answer include the allocation of dosages to specific populations.

During H1N1, state health officials allocated 10% of the initial available vaccine doses to tribal populations although they compose 5% of the state’s population. That’s because of health disparities, Humble explained.

“They have more preexisting conditions that put them at higher risk, so if you give them the same amount as the rest of the state, you are not compensating for the health disparities that they have,” Humble said.

American Indians have also been disproportionately affected by COVID-19, state data shows. They compose 5% of the state’s population, but to date make up 11% of Arizona’s known COVID-19 deaths.

The NASEM report issued a four-phase framework for allocating a COVID-19 vaccine in the U.S. that is similar to the CDC playbook.

The report notes that immunization of children will depend on whether COVID-19 vaccines have been adequately tested for safety and efficacy in these age groups.

The CDC says the federal government is committed to providing free or low-cost COVID-19 vaccines and that vaccine doses purchased with U.S. taxpayer dollars will be given to the American people at no cost, though vaccine providers may charge administration fees to administer the shot to someone.

Most public and private insurance companies will cover that fee so there is no cost for the person getting vaccinated. In addition, people without health insurance can get COVID-19 vaccines at no cost, the CDC says.

Officials with the national Association of Immunization Managers and the Association of State and Territorial Health Officials, a nonprofit organization of U.S. public health agencies, are urging Congress to provide at least $8.4 billion in emergency supplemental funding for COVID-19 vaccine distribution and administration, plus an additional $500 million for seasonal flu operations.

“State and local public health agencies are deep into the planning process to distribute any COVID-19 vaccine as soon as it is determined to be safe and effective,” the Association of Immunization Managers’ Executive Director Claire Hannan said in an Oct. 15 news release.

To date, CDC has distributed $200 million to support state planning efforts, Hannan said. While that funding is a necessary first step, it equals approximately 60 cents per person, which is not adequate to vaccinate every American with the expected two-dose course at this amount, she said.