Over the course of a few days in March, enrollment at Little Ones Learning Center in Forest Park plunged from 170-plus to eight.

With the coronavirus pandemic looming, and a large number of parents working from home, many people no longer needed the service the day care center offered. Others were afraid to use it.

But Ebony O’Neal kept sending her child. It was either that or the daily uncertainty of trying to find relatives to babysit while she worked two jobs, one as a hospital technician and the other as a waitress.

“Without day care,” she says, “working full-time would be really difficult.”

Though Little Ones Learning Center is still operating and enrollment has somewhat rebounded, it’s taken financial assistance from the state and federal government for the facility to hang on, says director Wande Okunoren-Meadows.

“The whole child care industry is reeling from this,” she says.

Nearly 30% of Georgia’s child care centers are now closed. Many of those that remain open are on borrowed time, says Amy Jacobs, commissioner of the Department of Early Care and Learning.

That’s not just a problem for the parents of young children. Experts say the crisis in day care is becoming a crisis in the economy. Without reliable, affordable child care, some parents — especially mothers, who bear a heavier burden when it comes to child rearing — can’t work.

In the economic recovery from the pandemic, child care is “a linchpin,” said economist Jonathan Gruber of the Massachusetts Institute of Technology.

While it’s unknown how many parents have left jobs or been forced to drop to part-time because of child care issues, there were 6 million fewer women working last month than in February, according to Bureau Labor Statistics data.

That number would include Kim Sanders, as well, if not for the Goddard School, the Roswell Road facility where she and her husband take their three children, who are all under the age of 6.

“For us, child care has been a necessity,” says Sanders, an accounting consultant, “and not just during the pandemic.” 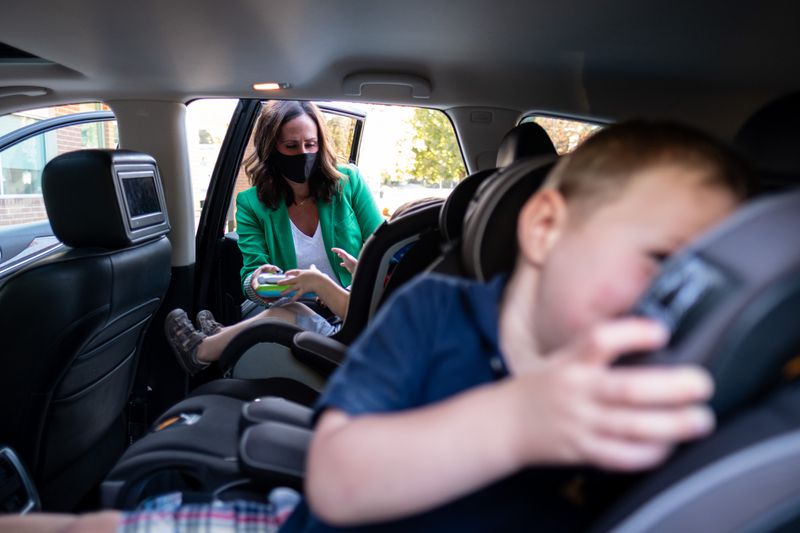 Day care centers confront a nearly impossible business model when enrollment is down, the paychecks of the parents who use them are lighter, and costs to clean and sanitize are ballooning.

When the pandemic hit, she had about 45 children enrolled. Responding to warnings about the virus from government officials, she closed the center until late May.

After reopening, she never had more than 15 children.

With the virus still uncontrolled, some people feared sending their children to day care, and many parents had lost employment. Then, there were the people working from home — about 20% of employed Americans, according to a report last month by the Federal Reserve Bank of Dallas.

But, even with fewer children, Scott’s costs were much higher.

It wasn’t enough. She closed for good September 11.

The low enrollment and extra expense “have pushed a huge section of the industry out of business,” says Melissa Boteach, vice president for infant security and child care at the National Women’s Law Center. “Before the pandemic, child care centers were already operating on a razor-thin margin.”

On average, Georgia’s day care centers receive more than one-third of their revenue in state and federal subsidies — but their income is eaten by rents, wages, insurance and materials.

This year, the Georgia Department of Early Care and Learning has disbursed about $58 million in federal CARES Act funding to 3,789 providers.

With that money, Little Ones Learning Center has managed to stay open. And that’s a good thing because “a lot of parents needed us,” says Okunoren-Meadow. “They were deemed essential, like grocery and maintenance workers. We don’t have any lawyers or doctors here.”

Markisha Griffin, who works at a transportation company, says she would have been left scrambling without Little Ones. “I had to keep working. The trucks – they don’t stop.”

Enrollment at the day care center is at roughly one-third of capacity, Okunoren-Meadow says.

That’s not ideal, especially when it’s unclear if any additional financial aid will be coming from the government. But many facilities have fared far worse.

In Georgia, about 1,000 centers are now listed as “temporarily” closed, according to the Department of Early Care and Learning.

Most have reopened, but enrollment overall is still down nearly one-third, with the largest attrition among parents who are having trouble financially, he says.

Sharon Foster is the owner of Bells Ferry Learning Centers, which has two locations. At its low point, the Woodstock facility’s enrollment fell to 20 from 180. Now, it serves 125 children. The center in Marietta has 25 children instead of the usual 55.

“That’s nowhere near enough,” says Foster. “But we support it with the Woodstock business.”

In Statesboro, Smith-Lank has raised tuition at Kids World Learning Center about 3%. “But to cover the costs, we would need to raise tuition 18%,” she says. “People can’t pay that.”

Already, the costs of child care services are far higher in the U.S.than in many industrialized nations. Many countries offer free or highly subsidized child care, but U.S. families are largely on their own.

So, while many parents in this country need to use child care facilities, the costs can easily swallow much of their paychecks.

Full tuition for Jessica Rowlison’s 11-year-old son and 3-year-old daughter would be $292 a week, nearly half her pre-tax income from a job as an assistant property manager. She was lucky, getting a scholarship from the state that pays most of the $150-a-week tab for her daughter.

When the Childcare Network in Acworth closed in the spring because of some virus cases, she says she had to stop working.

Though she still had a job, she had no one to take care of her kids. So she stayed home with them, even though she couldn’t afford to.

“In my situation, I have to work,” she says. She lived off her savings, and she waited for the day center to come back.

“Finally,” Rowlison says, “they called and said they were going to open.”

They asked if she wanted to bring her kids back, she recalls. “And I was yes, yes. Yes, yes, yes.”