As 5G communication ramps up with the new Apple iPhone 12 and other next-generation cellular devices, a Chandler factory stands ready.

NXP Semiconductors this week received a green light to start shipping its first components from an advanced Gallium nitride factory in Chandler. Gallium nitride is a material used in an advanced type of chip that allows NXP’s power amplifiers, transistors and other components, installed atop those increasingly ubiquitous cellphone towers, to handle more cellphone transmissions more quickly.

NXP recently completed a $100 million facelift at the roughly 30-year-old facility that will allow it to furnish replacement components for use in towers that can service 5G or fifth-generation cellphone communications.

“This 5G wave is really just getting started,” said Paul Hart, an NXP executive vice president at the Chandler plant. “As more cellphones have 5G capacity, it will give us a lot of traction.”

NXP, a global corporation headquartered in the Netherlands, took over the facility when it acquired Freescale Semiconductor in 2015. Freescale was a division spun off by what was then Motorola Inc. in 2004.

The facility, in northeast Chandler, employs about 1,500 people, including about 250 focused on the new gallium nitride components. NXP counts around 30,000 employees spread across 30 or so nations and is on pace to log annual revenue of around $8 billion. NXP has operated in the semiconductor industry for six decades.

Hart, who grew up in neighboring Tempe and attended the University of Arizona, said the upgraded facility builds on metro Phoenix’s expertise in this industry. “Arizona has had this wireless heritage since 1949, when Motorola moved here,” he said.

Several other large semiconductor manufacturers have operations here too, including Microchip Technology and ON Semiconductor, both of which are headquartered in the Valley, and Intel Corp. Taiwan Semiconductor Manufacturing, meanwhile, has announced plans to invest $12 billion in a massive Phoenix operation in coming years.

Hart said he considers the upgraded NXP site, which features a new clean room, to be the most advanced gallium nitride semiconductor factory or fab in the world — and NXP’s first such facility in more than a decade. It also can supply 6G needs, with even higher frequencies and more bandwidth, as they arise several years down the road.

The Chandler site continues to supply silicon semiconductors for a range of other uses, primarily in the automotive industry, based on 4G and earlier technologies.

And while the Chandler plant can support 5G applications in industries such as aerospace/defense, cellphones are expected to be the main growth driver, Hart said. Key customers include Ericsson, Nokia and Samsung. 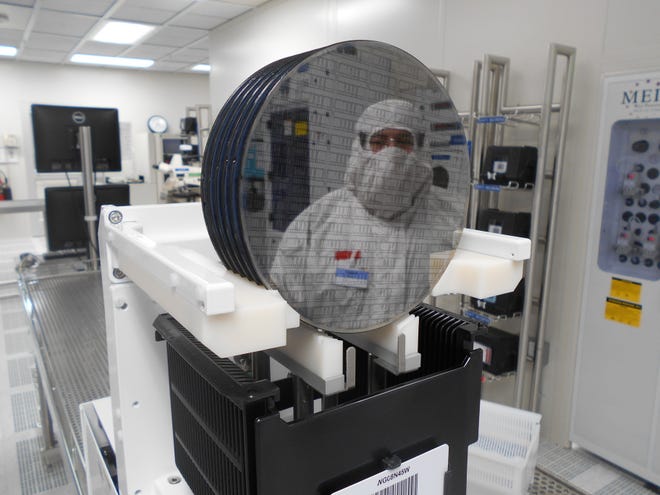 NXP has halted shipments to another traditional customer, China’s Huawei, under national security directives given by the White House, but Hart said the company hasn’t been significantly affected by that.

In general, NXP expects demand for 5G components will be strong in coming years. As it is, the company’s products help to handle around 50% of all cellphone calls, Hart estimated.