Communities around the country will celebrate Vote Early Day on Saturday, Oct. 24, which organizers are calling a “new national holiday” centered on promoting awareness of early voting options.

In Phoenix, artists Nyla Lee and La Morena created a pop-up chalk mural on Roosevelt Row in celebration of Vote Early Day in partnership with MTV’s Vote For Your Life campaign. The installation also features a yellow balloon chain by Robert Bose, who has made similar chains at Coachella and Burning Man.

The theme of the chalk mural by Lee and La Morena is “Vote Early— For Your Family.” The piece is based on a photograph taken by Arizona Republic photojournalist Nick Oza that depicts a family reunited in Guatemala after being separated for months. 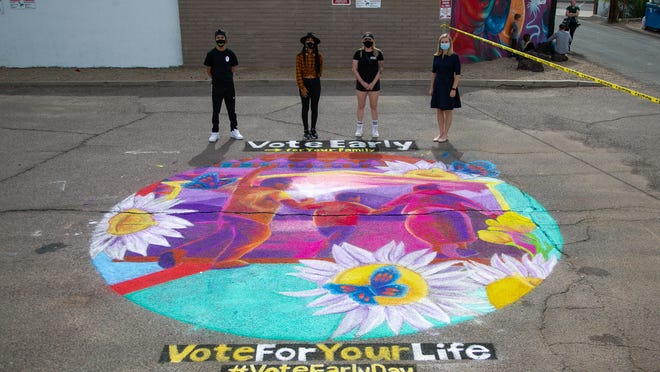 According to the website, Vote Early Day is a movement of nonprofits, businesses, creatives and others that promotes early voting to ensure any last-minute issues on Election Day don’t stop people from casting a vote.

MTV is a founding member of Vote Early Day said Louis Wills, the MTV project manager for the Phoenix art installation. Now, he said, there are thousands of partners in the endeavor.

Artist Nyla Lee said that the mural took around 22 hours to complete. Lee and La Morena collaborated to come up with the idea for the brightly colored mural that she said represents “a world without borders and boundaries.”

Visitors will be able to learn about early voting options and add their own chalk messages on the pavement near the mural at Saturday’s event. While the Vote Early Day event is Saturday only, the mural will stay in the parking lot until it naturally washes away and the balloon chain will be up Saturday and Sunday.

The installation is open to the community starting at 10 a.m. Saturday, Oct. 24, on Roosevelt Row. There will be COVID-19-related safety measures in place at the event and visitors are required to wear masks.