The usually quiet streets of the Sun Lakes community were louder than usual Saturday morning as a slew of retirees in golf carts paraded around the area in support of presidential hopeful Joe Biden.

The parade began at 10 a.m., with the group of several dozen golf carts and cars adorned with Biden-Harris signs and American flags moving through the community before ending up at the Cottonwood Country Club at 11:30 a.m.

Cheryl Washington, 55, and Carla Llewellyn, 66, both attended the event because they believe President Donald Trump should be a one-term president.

“It’s so important that our country change course,” Washington said. “We are definitely headed down the wrong track with Trump and he has just taken our country to a place, a low, where I never thought our country would go — where we’re fighting with each other, we’re calling each other names, we’ve lost all respect and civility.” 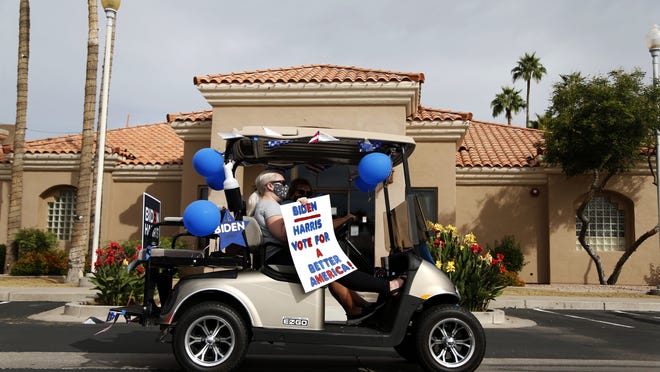 Washington said the Sun Lakes retirement community has been reliably conservative throughout the years, but the number of residents who have or are preparing to vote for a Democratic nominee is larger than many would think.

Llewellyn said she supports “so many things” about Biden’s platform, particularly his commitment to boost job creation and promote clean energy, which Biden detailed in an op-ed for The Arizona Republic earlier in the week. 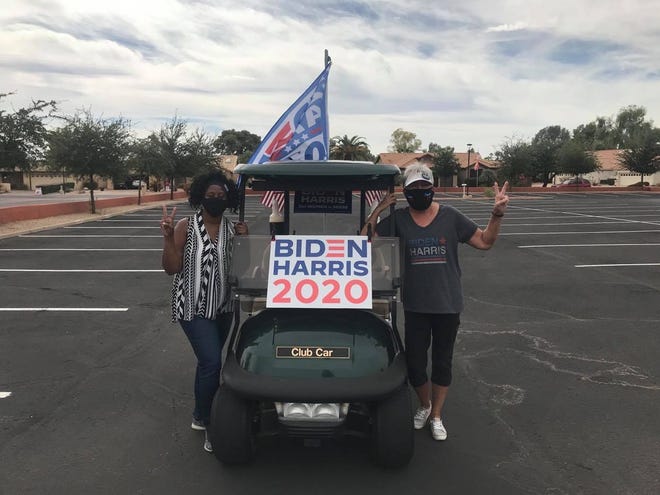 She also said Biden, if elected, would rely on science and not “nonsense.”

Scientific American magazine announced its endorsement of Biden in September, for reasons similar to those Llewellyn mentioned Saturday.

The magazine’s editors wrote the Trump White House should have encouraged Americans to wear masks and modeled other key social distancing measures, rather than encourage them to engage in “risky behavior.”

Additionally, they said Trump’s attacks on the Affordable Care Act and important public health agencies have made the country less equipped to deal with crises, while lauding Biden’s plans to “improve health care, reduce carbon emissions and restore the role of legitimate science in policymaking.”

“We’re ready for this country to have respect again and be seen as a world leader again, and Joe Biden is the guy to make that happen for us,” Llewellyn said.

She said she believes many in the retirement community are shifting away from Trump because of what they view as his failures to protect vulnerable populations like themselves from COVID-19.

Data released Saturday by the Arizona Department of Health Services showed 71% of the 5,869 deaths from COVID-19 were people 65 years of age or older.

The president’s response to the pandemic was also touched on in thefinal presidential debate that took place Thursday night in Nashville.

“We’re learning to live with it,” Trump said of the virus early in the debate, arguing that coming vaccines and therapeutics would take care of the latest surge in COVID-19 cases cropping up in many states across the country. “We can’t lock ourselves in a basement like Joe does.” 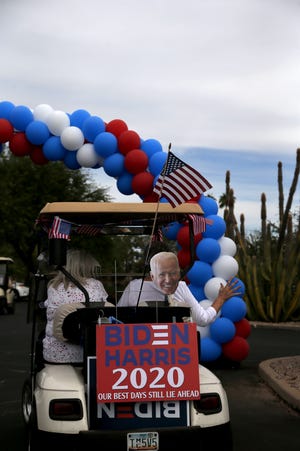 Though Washington and Llewellyn said they got many honks and cheers from onlookers as they passed by in their golf carts adorned with signs supporting Biden and other Democratic politicians, they said there were a few who gave them thumbs-down and otherwise expressed displeasure with their advocacy for Biden.

“We don’t expect everybody to agree with us — that’s what’s great about this country,” Llewellyn said. “You can support people who stand for your values, and if there are people in this community, that Donald Trump stands for their values, then that’s who they should vote for.”

Ultimately, Washington said they hope their event on Saturday reminds everyone in the community of the importance of voting — no matter where they fall on the political spectrum.

Llewellyn said she would feel “happiness, relief” and have “tears of gratitude” if Biden wins the Nov. 3 election, saying that she was “cautiously optimistic” that would be the case.

Washington said she also believes Biden has a strong chance of making Trump a one-term president, but said Americans have to make voting a priority in order to make that happen.

“If we don’t change course now, I don’t know if there’s going to be hope for us,” she said.