Cher will join Biden for President get-out-the-vote events in Maricopa County to begin the final week of the campaign.

At 7 p.m. Sunday, the singer-actress will participate in a socially distant campaign rally in Phoenix to talk about why Arizonans should vote early for Democratic nominees Joe Biden and Kamala Harris. The location has not been publicly announced.

On Monday, the star will help distribute campaign materials at newly opened early voting locations in Maricopa County to highlight how easy and convenient it is to cast a vote before Nov. 3.

Her first Monday stop, at 11 a.m., is at Mission for Arizona Supply Center in the Maryvale neighborhood of Phoenix. The location for her second stop, at 2:15 p.m., has not been announced.

Anyone interested in attending must RSVP and will be required to adhere to COVID-19 safety precautions, including masks and social distancing.

The address and logistical details will be made available upon RSVP.

Cher tweeted her plans to travel to Nevada and Arizona to speak on behalf of Democratic candidates Biden and Harris on Wednesday.

A press release from the Biden campaign confirmed the news.

“This weekend, award-winning singer and actress Cher will travel to Nevada and Arizona to campaign on behalf of Joe Biden and Kamala Harris,” it read.

On Saturday, Oct. 24, she traveled to Las Vegas.

The singer-actress has never been shy about sharing her political beliefs and has been tweeting about the upcoming election pretty regularly, urging fans to vote.

Last week, she tweeted at MSNBC’s Joe Scarborough, “I realize… What Bleeds Leads, But your children will grow up in a White is right world Ruled By a Villain. Tonight You were The James Comey of Hillary’s Campaign. If you Talk Negative Ppl Will Think Negative. Serve Your Country not yourself YOU KNOW WHAT HE IS.”

A day before that, she tweeted that “without your vote,” the United States “is lost to us,” adding, “The difference between lightness & the darkside is your vote.”

Cher raised nearly $2 million for Biden in an LGBTQ-themed virtual fundraiser in August.

Cher isn’t the only celebrity headed to Arizona on the former Vice President’s behalf.

How other musicians are getting involved in the 2020 election

Pearl Jam launched a vote-by-mail initiative, encouraging fans to vote by mail as soon as possible and recruit three friends to do the same.

In a press release announcing the initiative, Eddie Vedder wrote, “We believe America is at its best when every voice is heard. This is the most important election in our nation’s history. Our democracy is at risk. Your vote is your voice, and it’s time to use it.”

Willie Nelson shared an animated video for “Vote ‘Em Out,” an election-year plea to get out there and vote with a friendly reminder that “the biggest gun we got is called the ballot box.”

Stevie Nicks shared “a prayer for our country” called “Show Them the Way.”

Stevie Wonder released two election-year songs and a statement that read, “In these times, we are hearing the most poignant wake-up calls and cries for this nation and the world to, please, heed our need for love, peace and unity.”

And Graham Nash released an urgent call to action titled “Vote,” explaining, “All elections are important, but none so much as this one. Our very democracy is at stake.”

Not every famous musician is favoring Biden. Mike Love added to the tension in the Beach Boys camp when he had his touring version of the band play at a fundraiser for Donald Trump on Sunday, causing Brian Wilson and Al Jardine to disavow his actions.

And Ted Nugent, of course, has been reliably pro-Trump. 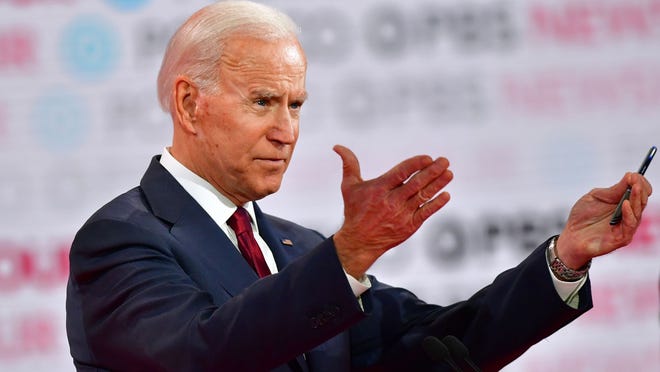