The race for president in Georgia is deadlocked in the final week of the campaign, with President Donald Trump and Joe Biden in a statistical tie in a state that hasn’t voted Democratic for president since 1992.

An Atlanta Journal-Constitution poll of likely voters released Monday showed Biden at 47% and Trump at 46%, within the survey’s margin of error of 4 percentage points. Libertarian Jo Jorgensen registered about 3% in the poll, while an additional 4% were undecided.

It’s the latest in a string of polls that show Georgia’s 16 Electoral College votes up for grabs. Biden is set to visit Atlanta and Warm Springs on Tuesday — the former vice president’s first stop in Georgia since clinching the nomination — as Republicans are forced to the defensive in a state long in the GOP column.

The survey of 1,145 likely voters, conducted Oct. 14-23 by the University of Georgia’s School of Public and International Affairs, also showed tight races in the state’s two U.S. Senate contests, both nationally watched races that could determine control of the Republican-held chamber.

U.S. Sen. David Perdue is essentially tied with Democrat Jon Ossoff, with the Republican incumbent at 45% and his challenger at 46%. About 4% back Libertarian Shane Hazel, and 5% are undecided. The close margins raise the possibility the race could head into a January runoff.

Another round of voting is almost certain in the special election for U.S. Sen. Kelly Loeffler’s seat, where the 21-candidate race makes it extremely difficult for anyone to win the majority-vote necessary to avoid the runoff. 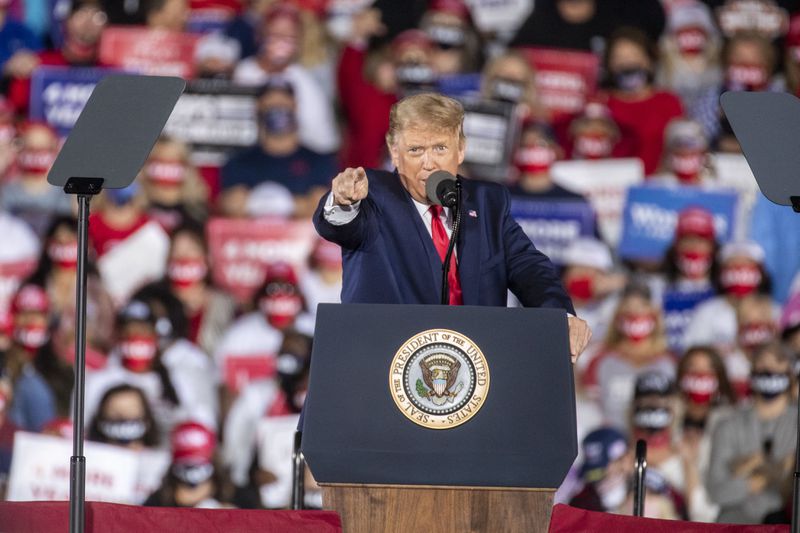 Democrat Raphael Warnock, the pastor of Atlanta’s famed Ebenezer Baptist Church, has opened a large lead compared with the last AJC survey, which was conducted in September. He’s climbed to 34% — up from 22% a month ago — while the other Democrats on the ballot have dropped to single digits.

Loeffler and U.S. Rep. Doug Collins, two Republican rivals who have pummeled each other while appealing to the party’s right flank, are deadlocked in the race to win the second spot in the expected January runoff.

The poll pegged Collins at 21% and Loeffler at 20%, mirroring other recent surveys that showed a tight race between the two. About 3% of voters back Libertarian Brian Slowinski, and 14% are undecided.

There’s room for the leading Republicans to grow in the final stretch of the race, particularly considering more GOP voters are likely to cast their ballots on Election Day. The poll showed roughly 15% of Republicans are undecided, along with 14% of independents.

More than 2.7 million Georgians have already cast their ballots early — including nearly one-third of the poll’s respondents — and turnout is expected to shatter records by surpassing 5 million. More than 1 million new voters have joined the rolls since the 2016 election, making the electorate younger and more racially diverse.

One of the main factors for Trump’s struggles in Georgia is Biden’s gains among white voters, the backbone of the GOP coalition in Georgia. The poll shows Biden with support from 28% of white voters — far above the 21% of white Georgians that exit polls showed Hillary Clinton carried in 2016.

“It’s a real barnburner,” said Trey Hood, a UGA political scientist who oversaw the poll. “If Democrats can get up to 30% of the white vote, and if Black voters comprise at least 30% of overall turnout, there’s a real chance of statewide Democratic wins.” 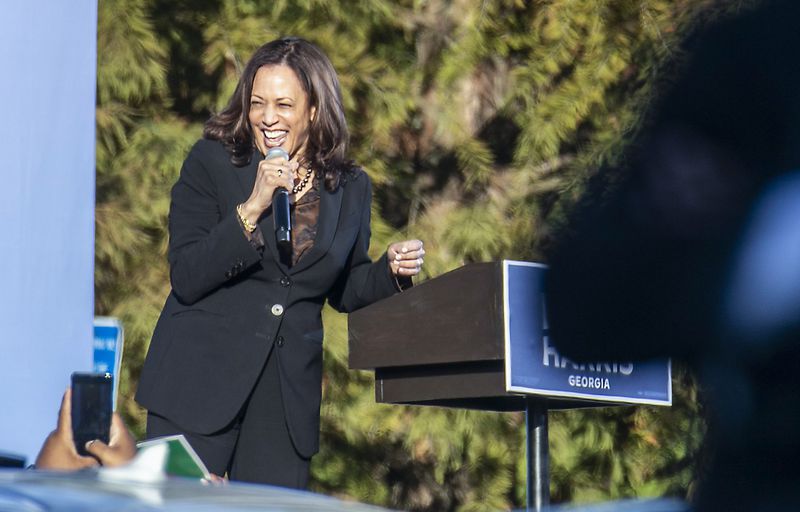 Biden also leads 69% to 18% among moderate voters and 69% to 10% among independents, a voting bloc once reliably Republican in Georgia. Trump has maintained a wide advantage with male voters, topping Biden 50% to 39%, while Biden leads among women, 52% to 43%.

“To be completely honest, Biden wouldn’t have been my first pick. But he’s our nominee. And Trump is a disgusting human being. He’s a complete liar, and he’s not right for this country,” said Jessie Eubanks, a 43-year-old from Hall County. “By default, Biden is our choice, and he’s going to provide a much clearer path for this country.”

Barry Knox, a 39-year-old in Norman Park, said the crises rocking the nation helped cement his decision to back Trump — even though he’s voting for Democrats in down-ticket races.

“I just feel like he is more able and more capable of doing the job than Joe Biden would be at this point,” said Knox, a property manager who said he’s worried about Biden’s mental aptitude. “His current mental state — I just don’t have a lot of confidence in him.”

The poll also pointed to some potential concerns after the Nov. 3 election, stoked in part by Trump’s repeated suggestions that he may not go along with the outcome of the election.

About 11% of Georgia voters said they weren’t prepared to accept the outcome of the presidential race as legitimate no matter who won, and an additional 9% said it would depend on the victor.

Those who said they weren’t prepared were divided roughly evenly along the political spectrum, including one-fifth of “very liberal” voters and 16% of those who say they’re “very conservative.”

Georgians are evenly split over Trump’s job performance, with 49% approving the way he’s handled the presidency and 50% disapproving. More than three-quarters of independents either somewhat or strongly disapprove. 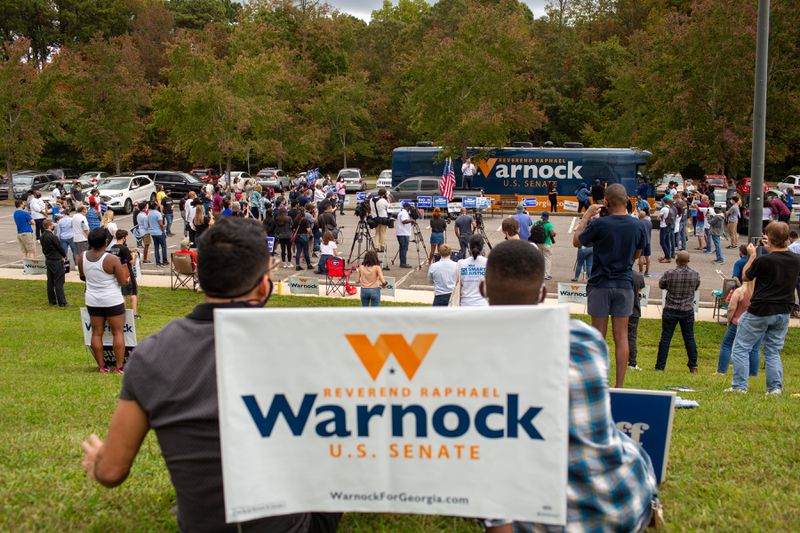 But Trump got higher marks when voters were asked which of the candidates would do a better job managing the economy, leading Biden 53% to 43%. That includes about 8% of Democrats and one-third of independents.

By contrast, Georgians gave Biden the edge — 51% to 45% — when asked who would do a better job handling the still-raging coronavirus pandemic. Biden also led 50% to 42% with voters about addressing racial equality.

An additional 9% cited the U.S. Supreme Court, which has galvanized voters from both sides of the aisle after the death of Justice Ruth Bader Ginsburg led Trump to name Amy Coney Barrett to fill the seat. The U.S. Senate is expected to confirm her nomination on Monday in a near party-line vote.

“The way that Trump and his cronies are destroying our democracy, I couldn’t not vote for Democrats,” said Doug Curlin, a 63-year-old former accountant who lives in Winder. “And the way the Senate is now, with the way they’re controlling the Supreme Court (appointment) — I just can’t vote for any of them.” 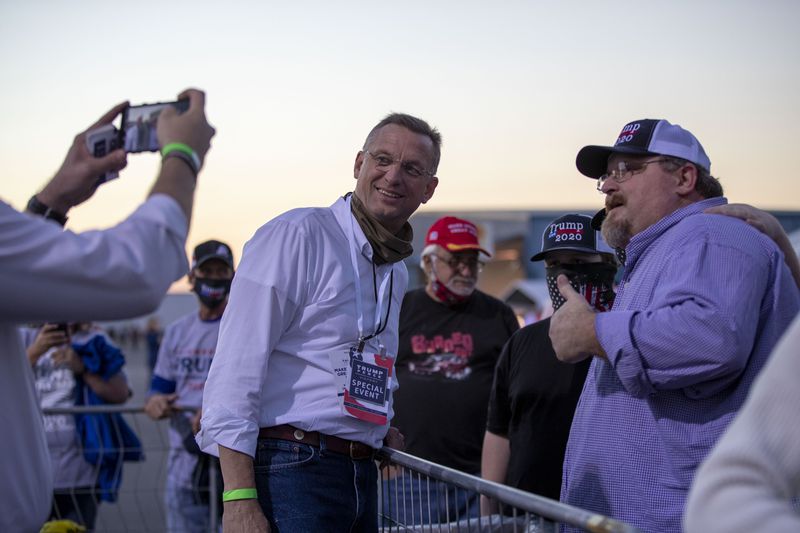 Overall, a slim majority of Georgians (52%) disapprove of the way Trump is handling the pandemic, compared with 47% who approved. Voters were more evenly divided over Gov. Brian Kemp’s approach to the outbreak, with 47% disapproving and 49% approving.

There was a similar split over the status of the pandemic, which Trump has portrayed as fast subsiding even though infection rates are on the rise in parts of the U.S.

Those responses broke down along ideological lines, with 50% of Republicans saying the pandemic was mostly or completely under control, while nearly two-thirds of Democrats said it was “not at all” wrapped up.

Among those was Will Mullis, a software consultant and military veteran who blamed the Trump administration for the rapid spread of a disease that has killed more than 220,000 Americans.

“The virus is hitting the rural areas as hard as it is anywhere, but people are taking their cues from Trump,” said Mullis, who lives in Jasper County. “He just wants to pretend like everything is great, and it’s not.”