North Georgia is in for one more day of sunshine before a tropical system headed for the central Gulf Coast is expected to brings lots of rain and the chance for severe weather.

“Today is going to be a pretty nice afternoon for us,” Channel 2 Action News meteorologist Brian Monahan said. There is a chance of a stray shower Tuesday, but he said there will be fewer clouds in the sky and more opportunities for sun.

Some patchy fog Tuesday morning is expected to burn off over the next few hours, according to Channel 2.

“It’s pretty humid to start, but by the afternoon some breaks of sunshine develop,” Monahan said. “That’s going to push us back up into the upper 70s.”

Atlanta’s projected high is 78 degrees. Overnight, Monahan said North Georgia will settle into the 60s before temperatures rise back into the mid-70s Wednesday as the rain comes down.

Zeta was downgraded to a tropical depression after making landfall in Mexico on Tuesday morning, but Monahan said it is likely to strengthen and again become a hurricane before it reaches the U.S. as the 11th named storm to make landfall this year.

ExploreHurricane warning for New Orleans as Zeta swirls over Mexico

The current track has the storm passing close to North Georgia on Thursday, according to forecasters.

Even before Zeta’s arrival, Monahan said rain will lift in our direction. There will be wet weather for the Wednesday morning commute, he said.

“We’re going to have showers off and on Wednesday,” he said. “Some of the heaviest rain arrives Thursday.”

All the rain should move out of the area Friday, and North Georgia will dry out in time for Halloween festivities Saturday, according to Channel 2. 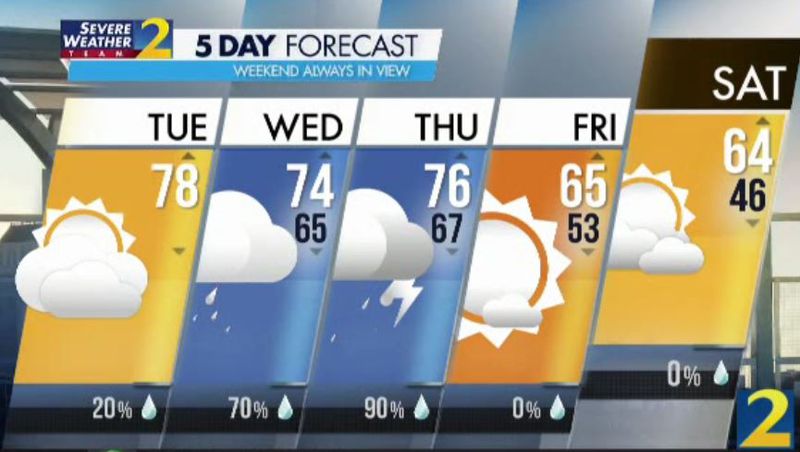 Despite some foggy conditions, metro Atlanta interstates are moving well to start the Tuesday morning drive. There are no major crashes or delays at 6 a.m., according to the WSB 24-hour Traffic Center.