He promises ‘hope and healing’ at Warm Springs stop.

WARM SPRINGS — Joe Biden visited Georgia on Tuesday for the first time since clinching the Democratic Party’s presidential nomination, and he promised to deliver “hope and healing” to the nation’s soul as the race for the White House nears the finish line.

Biden delivered a message calling for bipartisanship at a time of turmoil, wrapping himself in the legacy of former President Franklin Roosevelt on a grassy mountaintop not far from where the New Deal Democrat once had his private retreat.

“Too many among us spend more time shouting than listening, more time fighting than working together, more time demonizing and denigrating others, rather than lifting them up,” Biden said, mentioning fears that the partisan divide has “passed the point of no return.”

“Has the heart of this nation turned to stone?” Biden said. “I don’t think so. I refuse to believe it.”

The visit raised hopes among Democrats who feel they’re on the cusp of carrying the state for the first time in nearly 30 years. He later traveled to Atlanta for a drive-in rally, saying there was “no state more consequential” than Georgia in the Democratic fight to win control of the U.S. Senate.

Republicans have won the state in every White House contest since 1996, but President Donald Trump can’t afford to take Georgia for granted in this cycle. He’s been advertising in the state since June and has veered from other competitive battlegrounds to visit Georgia three times in recent months.

For much of the campaign, Biden has been laser-focused on recapturing traditionally Democratic territory in the Upper Midwest that Trump won in 2016.

But buoyed by solid polling numbers, he’s expanding the map to try to run up his Electoral College score in states such as Arizona, North Carolina and now Georgia. About 3 million Georgians have already cast their ballots, and surging turnout and an influx of new voters have helped make the state even more unpredictable. 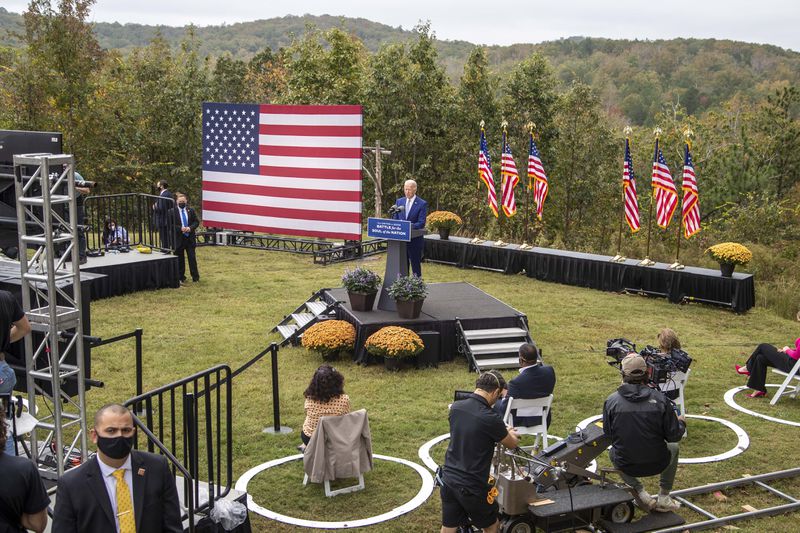 Biden’s speech in Warm Springs, the tiny Georgia town whose famed therapeutic waters made it the home of Roosevelt’s “Little White House,” made it clear he aimed to embrace the former president’s legacy of guiding the nation through crises.

“This place, Warm Springs, is a reminder that, though broken, each of us can be healed,” Biden said. “That as a people and a country, we can overcome this devastating virus. That we can heal a suffering world. And yes, we can restore our soul and save our country.”

Biden warned of a “pain striking at the heart of our country” and compared Trump and his Republican supporters to “con men, the phony populists, who have sought to play to our fears, appeal to our worst appetites and pick at the oldest scabs we have for their own political gain.”

Of the November vote, Biden said it’s nothing less than a battle over “who we are as a nation, what we believe and — maybe most importantly — who we want to be.”

Biden’s pivot to Georgia also aimed to help down-ballot candidates — including U.S. Senate contenders Jon Ossoff and Raphael Warnock, both competing for a pair of Republican-held seats that could determine control of the chamber.

“We have seven days to change the world,” Ossoff said Tuesday at a stop in Jonesboro. “And the world is watching.”

The race couldn’t be much closer. An Atlanta Journal-Constitution poll showed Trump and Biden deadlocked, both hovering around 47% of the vote. Ossoff is in a statistical tie with U.S. Sen. David Perdue. The poll is no outlier; most other recent surveys have pegged both contests as toss-ups.

Gov. Brian Kemp and other top state Republicans, meanwhile, headlined a pro-Trump rally in front of a run-down former textile mill in nearby Manchester hours before Biden arrived.

U.S. Rep. Drew Ferguson pointed to the brick facade behind him, and he promised the same economic forces that ravaged the textile business were headed to battleground states that rely on the oil industry if Biden wins.

“He’s going to come to the top of the mountain and he’s going to make a bunch of promises he can’t keep,” said Ferguson, R-West Point. “And you know what we should do? Reject them.”

‘Back on the map’

For Georgia Democrats, the visit is more than a pit stop on a chaotic campaign trail. It’s a sign that Biden’s campaign is making a concerted, concrete push to flip the state. And it comes days after his running mate, Kamala Harris, toured Atlanta and rallied voters.

State Democrats have a history of feeling scorned in White House races. Democratic presidential candidates have long viewed Georgia as little more than a place to raise heaps of cash to spend in more competitive territories.

That started to change in 2016, when Trump carried Georgia by 5 percentage points but Democrats carved a blue streak across much of the once-Republican suburbs. Stacey Abrams’ bid for governor two years ago accelerated that trend, as she captured a swath of territory once firmly in GOP hands. 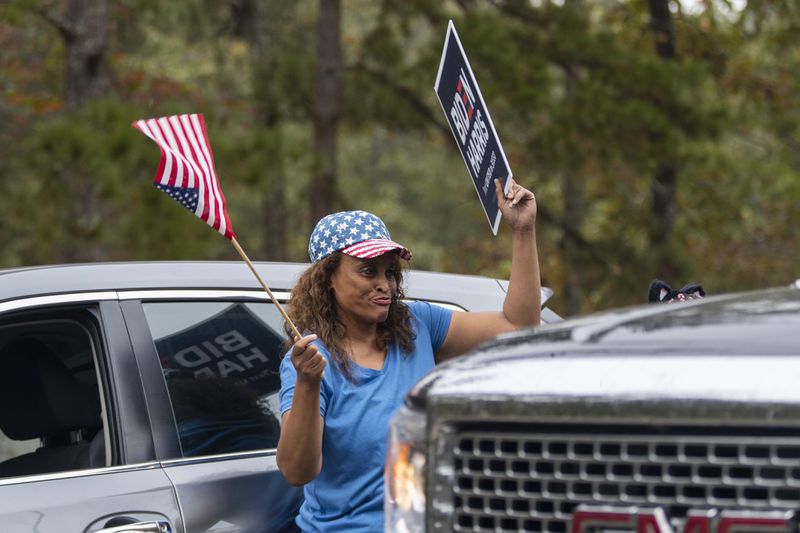 As both parties geared up for the 2020 campaign, Abrams penned a memo warning it would be “strategic malpractice” to sidestep the state again, as Hillary Clinton had done in 2016. Abrams and other Democrats celebrated the news of Biden’s visit a week before the election.

“Kamala Harris on Friday, Jill Biden twice in two weeks and now Biden is visiting Tuesday,” said state Rep. Calvin Smyre, the longest-serving member of the Legislature and a top Biden backer in Georgia. “Georgia is pivotal and back on the political map.”

Gloria Moore sat in the front row at the Mountain Top Inn & Resort, marveling that Biden would spend time in Georgia in the final stretch of the campaign.

“It’s surreal. Look where we are — the campaign had to go through a lot to get here, and it says everything about the state of the race,” said Moore, a local activist, as she surveyed the rugged mountainscape. “Talk about grassroots — well, this is grassroots.”

Even Biden seemed to marvel that Democrats had a chance to carry Georgia this close to Election Day, as he addressed an enthusiastic crowd crammed into about 350 cars at a sprawling Lakewood Amphitheater parking lot.

“There aren’t a lot of pundits who would have guessed four years ago that the Democratic candidate for president in 2020 would be campaigning in Georgia on the final week of the election. Or that we would have such competitive Senate races here in Georgia. But we do,” Biden said.

“Because something is happening here in Georgia and across America.”