Less than an hour after Gov. Doug Ducey said state health officials revised school COVID-19 guidelines at the request of public education leaders, the state’s leading public school official, Kathy Hoffman, wrote that the Arizona Department of Education did not request or recommend any changes.

Revisions quietly made to school benchmarks by the Arizona Department of Health Services last week have been the subject of controversy. Under the revisions, schools potentially could stay open longer in the event of substantial COVID-19 spread.

The virus spread would need to categorized as “substantial” in all three state metrics for the state to recommend the shift back to virtual learning. Before the state’s revision, health officials recommended closure of in-person school if one metric shifted to “substantial” spread, not all three.

Ducey was repeatedly asked about the abrupt changes to the guidelines at a news conference Thursday.

The governor said the change was made in consultation with education leaders but did not say who those leaders were. He also promised further clarification to the new guidance. Schools are not required to follow the direction; it is a recommendation.

“These guidelines were adjusted at the request of public education leaders in coordination with public health officials,” he said.

Hoffman tweeted that no such request was made by the Arizona Department of Education, the state agency that oversees public schools.

The Arizona School Boards Association, which represents district school boards across the state, released a statement Wednesday stating that it also was not included in conversations about the guideline change.

“This change was made without, to our knowledge, a concerted effort to communicate the reasoning for the change, or to understand the potential impact this change would have on district planning for the remainder of the year,” according to the statement. 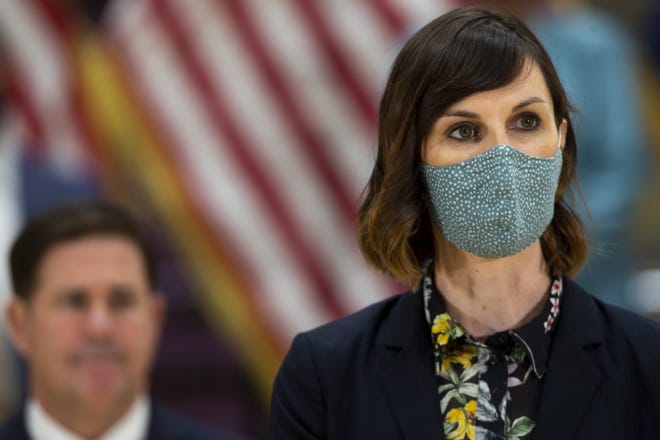 Dr. Cara Christ, Arizona Department of Health Services director, said during the news conference that the changes came about during conversations with local health officials and the Department of Education.

It was not immediately clear who participated in these conversations.

“During these conversations, our partners expressed concerns about the instability that would occur if recommendations to move back to virtual learning were based on a change in a single benchmark, especially in smaller rural counties,” she said.

Critics have said the change may ensure schools stay open when spread is substantial, a risky calculation. Will Humble, Arizona Public Health Association executive director, said the third metric the state uses, the percent of hospital visits for COVID-like illness, does not have to be reported by hospitals.

That metric is “flimsy,” he said, and relying on it may lead to schools staying open while the other two metrics show substantial spread of COVID-19 in a community.