Temperatures are down in the 40s and 50s to begin the day. Channel 2 Action News meteorologist Brian Monahan said there is still a breeze left behind, but a wind speed of 12 mph in Atlanta is nothing compared to the tropical storm-force winds from Thursday morning.

No rain is in the forecast Friday, according to Channel 2.

“For at least the next five days, we’re looking at dry weather across North Georgia,” Monahan said. “I’m looking forward to that, and I’m sure you are, too. A chance to catch our breath.”

Many are still dealing with the effects of the deadly storm.

A downed tree was blocking Ashford Dunwoody Road between Chaucer Lane and Rustic Ridge Drive in Brookhaven, according to the WSB 24-hour Traffic Center. Authorities suggest using Chamblee Dunwoody Road as an alternate.

In Cherokee County, more than a dozen roads remain closed Friday morning. One person was killed in Cherokee on Thursday when Zeta’s winds knocked a tree into a mobile home. Another two people were killed by a fallen tree at a Gwinnett County home, authorities said.

“A lot of us are very fortunate this morning as we wake up that the worst we’re dealing with is some power outages,” Monahan said.

Georgia Power would normally tap into its network of utility partners to quickly restore service, but those resources are limited due to Zeta’s extensive damage across the southeast, according to the utility. That is why some customers may not have power again until Sunday night.

However, “we expect the great majority of customers to be restored before then,” Georgia Power said in a tweet.

While Georgia has turned slightly cooler after Zeta, the tropical system triggered a snowstorm in the northeast. Monahan said the icy air won’t make it this far south, but Atlanta could wake up to temperatures in the 40s on Saturday morning.

The projected high Saturday is 62 degrees, and temperatures should fall into the 50s for evening Halloween festivities, according to Channel 2. By Monday morning, temperatures are expected to dip into the mid- to upper 30s in the city.

The morning of Election Day is also going to be pretty chilly, he said, with a projected low of 37 degrees. 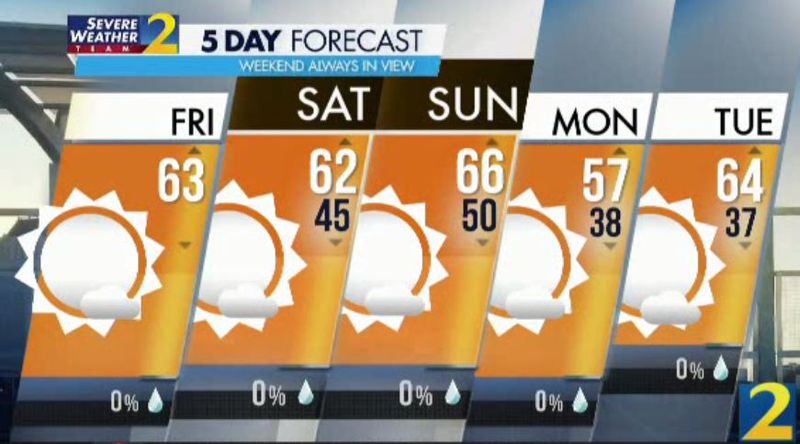