(CNN) A 2018 wildfire that killed three people and destroyed more than 1,600 structures in Southern California was sparked by utility equipment in fierce winds, according to a redacted investigative report determining the origin of the fire.

The report was released this week after Los Angeles County Superior Court Judge William Highberger said a delay caused by a California attorney general’s office investigation no longer outweighed the public’s right to know the cause of the fire.

“The Investigation Team (IT) determined electrical equipment associated with the Big Rock 16kV circuit, owned and operated by Southern California Edison (SCE), was the cause of the Woolsey Fire,” the report stated. Under strong winds, a guy wire on a steel pole connected with an energized conductor, causing “heated material” to fall on vegetation “thereby causing the Woolsey Fire,” it states.

However, five full pages and several sentences in the conclusory remarks remain redacted. The 70-page report includes the redacted pages under a section called “Violations.”

It became one of the most destructive fires in the state, according to the California Department of Forestry and Fire Protection, known as Cal Fire. A burn scar from the fire was captured byNASA’s Terra satellite. 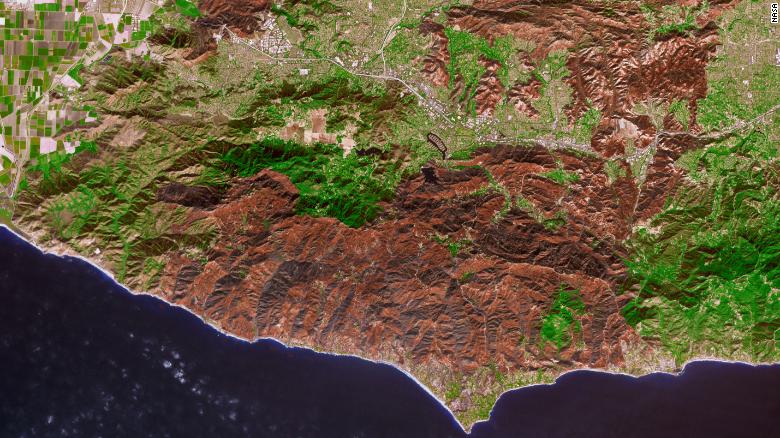 The burned areas from the Woolsey Fire are brown; unburned vegetation is green. The light gray or white areas are buildings, roads and other developed areas.

Southern California Edison said in 2019 that its equipment was “likely” the cause of the fire, which began at the Santa Susana Field Laboratory in Simi Valley.

“Absent additional evidence, SCE believes it is likely that its equipment was associated with the ignition of the Woolsey Fire,” the company said.

The company said it did not find evidence of downed electrical wires at the suspected origin point of the fire, but it did report an outage on its electrical system near that point and found a pole support wire close to an electrical wire that was energized before that reported outage.

A witness reported seeing fire near the equipment around that time, the company said. The report also cited multiple witnesses who reported hearing a loud buzzing noise or experiencing a power outage before seeing smoke and fire in the area.

The news of the investigative report was first reported by the Ventura County Star newspaper.

In a statement given to the Star on Wednesday, Edison spokesman Chris Abel said the company fully cooperated with investigators and “shared the conclusion of Ventura County Fire Department’s redacted Woolsey report.”

Abel did not respond to a CNN request for comment.

A Cal Fire spokesperson directed requests for comment to the Los Angeles Superior Court, which did not immediately respond.

A Southern California Edison power line may have played a role in the ignition of the ongoing Silverado Fire, a report filed recently with California Public Utilities Commission shows.

90,000 people told to evacuate because of wildfires in Southern California

The initial safety incident report describes overhead electrical facilities in the origin area of the Silverado Fire, but notes there was no activity on the circuit.

“We reported the incident despite seeing no activity on the nearby 12-kV circuit nor any downed power lines because it appears that a lashing wire attached to a telecommunications line may have contacted SCE’s power line above it, possibly starting the fire,” Abel told CNN earlier this week.

The fire began in a place considered to be a “high fire risk area,” and will be investigated by the Orange County Fire Authority. The company promised to cooperate fully with that investigation.

Photos: Wildfires burning in the West