(CNN)Images of protesters pouring into the streets, storefronts being boarded up and cars burning in Kenosha baffled the fourth graders in Melissa Statz’s class.

Barely two weeks into the school year, the Wisconsin social science teacher, had overheard some of her students at Cooper Elementary in Burlington talking about the city that was nearly 30 miles away.

After the August shooting of Jacob Blake by a White police officer in front of his three young sons, Kenosha had erupted in protests. It had been the latest incident drawing attention to the use of force by police amid a summer of demonstrations over how officers treat Black people across the US.

“It seemed like a good time to talk about racism and what it is,” Statz, who had just started her position at the school after raising her two small children, told CNN.

Statz developed a lesson for the next day that included a children’s book, a worksheet and an educational video. The children seemed engaged and asked a lot of questions, Statz said.

The lesson, which discussed systemic racism and the Black Lives Matter movement, sparked outrage in Burlington and the backlash was swift.

Angry parents began calling for the teacher’s resignation. They accused her of “indoctrinating” children and a Facebook group titled “Parents Against Rogue Teachers” was formed. The anger eventually came to the fore at a fiery school board meeting. Days later, police investigated two acts of vandalism involving the N-word at two local schools, including Cooper Elementary.

The uproar highlights just how politicized the term Black Lives Matter has become, Statz said. “The point of the lesson was that Black lives do matter and that this is a movement that is currently happening because a group of people aren’t being treated the way they should be.”

Burlington just can’t seem to agree on how to have that conversation and while the school district has acknowledged there are unresolved problems, Statz and some parents say more needs to be done. Anti-racist policy and the school district’s diversity curriculum will be on the agenda at the next school board meeting on November 9, but the uproar has left many disappointed and a town divided.

There are fewer than 50 Black students in a district of nearly 3,000

Shelley Smith was thrilled to see her 10-year-old son Jalen beaming with excitement when he got off the school bus in late August.

“Kids at that age don’t get that excited about school,” Smith told CNN. “He had sat on the bus for 25 minutes and couldn’t wait to tell me everything about the lesson that day.”

Jalen is one of only 48 Black students in a school district of nearly 3,000 in Burlington. The sleepy Midwestern town of only 11,000 is almost 90% White. 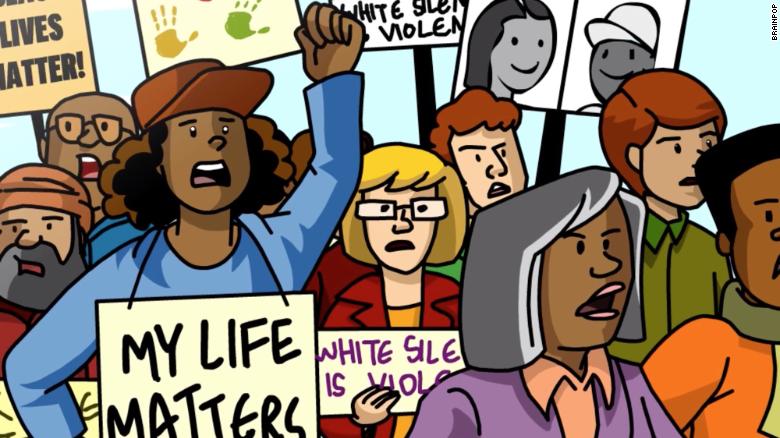 A screengrab of the video Statz used during her lesson. The video addressed common questions children might have about the current Black Lives Matter protests.

Smith felt like the lesson on race and the Black Lives Matter movement gave her son a confidence boost and thanked Statz for seizing the moment.

Smith, who is White, has already had “the talk” with her two Black sons, who are 10 and 11-years old.

“It was nice to finally have a teacher that really saw my son, you know, and acknowledged that his experience in life is different,” she said.

Smith said the disappointment was crushing when she had to tell Jalen that the lesson on racism and Black lives wouldn’t be taught anymore.

“He was kind of confused as to why something like that couldn’t continue to be discussed.”

How a lesson meant to educate became polarizing

Statz says she was shocked when she received a text message from a coworker to check Facebook hours after the school day had ended.

A parent had posted the worksheet the 4th graders had used in class into a local community group. Parents and members of the community were outraged.

“I just couldn’t believe the amount of hate and ignorance of some people,” Statz told CNN.

“People were saying…I should never be allowed near children, that I’m corrupting them and mentally abusing them. I knew I lived in a conservative town but reading the comments was really upsetting.”

The teacher said she specifically picked materials that were neutral. She wasn’t naive about the the fact that some parents had strong negative reactions to the mere words “Black Lives Matter.”

The worksheet posed questions like “What is the Black Lives Matter Movement Trying To Do?” and “What Can You Do To Help End Systemic Racism?”

Parents complained that Statz hadn’t sought approval from the school board before administering the lesson.

The class also talked about Trayvon Martin and how the Black Lives Matter movement began. Statz said she led an in-depth conversation about the police and made clear to students her view that there are plenty of good police officers that they know and respect.

Parents complained that Statz hadn’t sought approval from the school board before administering the lesson.

“I have never done that,” Statz told CNN about seeking approval about the lesson plan. “It’s really normal for teachers to take something that the kids are really interested in or have a question about and turn it into a lesson, especially in social studies.”

One parent, whose child is a student in the class but declined to be named for this story citing fear of retaliation, told CNN in an email, “the teacher’s behavior is discriminatory and creates division. She overstepped her role as a teacher. She forced us parents to have these mature adult conversations with our young children.”

“These kids are already experiencing racism,” Statz told CNN. “If we don’t acknowledge it now, it’s just going to get worse and at least now when I’m teaching them about it, they’re open to it, they want to learn.”

Adrianne Melby, who is an administrator of the “Burlington WI Buy Sell Trade” Facebook group where the initial discussion about Statz’ lesson erupted, told CNN that parents should have been given the choice to pull their child from the lesson ahead of time, “similar to sex ed classes.”

“Unfortunately it’s just a hot button topic right now,” Melby said speaking about the Black Lives Matter movement, “and parents should have been made aware of this lesson ahead of time.”

What the school district says

The school district became aware of brewing controversy and the superintendent issued a statement the same day as the lesson attempting to defuse the tension and appease angry parents.

In a letter to families in the school district on August 30, superintendent Steve Plank acknowledged the polarization over the lesson and affirmed it has been “an individual decision, not part of the approved curriculum of Cooper Elementary School or the BASD.”

This book was among the materials Statz said she specifically picked because she believed the content was neutral.

In hindsight, Statz wished she had alerted parents to the lesson’s subject matter sooner. “Things blew up before I got that chance. I wish I had the opportunity to explain the objective of the lesson and the resources I used instead of parents only hearing a small portion of it on social media.”

On September 14, the tension spilled from Facebook into the local gymnasium where the school board held its big annual meeting. The classroom controversy was not listed on the agenda, but it did send sparks flying, drawing dozens of community members to speak, leading to fiery moments.

“It was a mess,” Melby told CNN. “Parents on both sides sat through a two- and half-hour meeting where things got really inflammatory. It was disgusting.”

The school board concluded the meeting with a statement in support of Statz, saying in a statement the board “does not believe a one-time use of curricular materials ought to define a teaching career and is most certainly not a terminable offense.”

…And then came the racial slurs and vandalism

A few days after the contentious school board meeting, school officials discovered the N-word was etched into wood chips outside of Cooper Elementary.

Following this incident, superintendent Plank condemned the act, stating, “there is no neutrality when pursuing equity.”

“The fact that we even need to specifically say that Black Lives Matter to affirm the importance of human beings is to say that we as a nation have not done a good job of regarding black and brown people as valuable members of our society historically or currently,” the September 18 letter affirmed.

Barely two weeks later, officials found the N-word, yet again, this time spray painted on the concrete floors of a local middle school.

Burlington Police have not released the names of the people they believe were involved in the two acts of vandalism but in an email to CNN police said that during interviews the subjects stated what they did was “dumb” and “stupid.”

“The Burlington Police Department denounces any form of racism, and in each case charges were referred to the Racine County District Attorney’s Office for charging consideration,” the statement read.

The Racine County District Attorney’s Office told CNN it does not comment on cases involving juveniles.

An opportunity amid controversy

“We had already been seeing [racist behavior], witnessing it and were even targets of it,” Darnisha Garbade, who is Black, told CNN. “But I think when Mrs. Statz taught that lesson others were able to see the things that we had been saying were happening for a long time.”

Garbade is the founder of the Burlington Coalition for Dismantling Racism, a local activist group that has been pushing for equity in education in the district. Statz is a member of the coalition.

In a town that voted 2 to 1 for Donald Trump over Hillary Clinton in 2016, Garbade says she feels like she is not exactly playing to the crowd. But she sees the current moment in Burlington as an opportunity.

“I honestly feel like if we weren’t getting this kind of pushback and backlash then we probably wouldn’t be doing something right,” Garbade said.