Researchers who study extremism warned Friday that self-organized groups might take up arms and station themselves around polling places or, after the election, mobilize and prepare for civil war.

For now, such activity was hypothetical, said Cassie Miller, a senior research analyst at the Southern Poverty Law Center. But Miller said such groups have used social media to organize and mobilize quickly to live out their “violent fantasies.”

The telephonic news conference organized by the Southern Poverty Law Center was designed to alert law enforcement, election officials and the public about the possible threat.

In Arizona, the head of the Prescott-area chapter of the Oath Keepers group, which recruits military and law enforcement officers, has warned residents to be prepared to protect their neighborhoods from feared extreme left-wing protesters who would be upset should President Donald Trump be re-elected.

Part of that the pro-Trump group’splan involved closing streets and assigning monitors to control access, according to a planning document shared with The Republic.

Nationally, the planned protest actions by self-styled paramilitary groups could come in two stages: armed groups standing around polls looking for what they might deem to be illegal activity. Then, after the election, acting as a protective force.

Miller said many extremist groups believe that the only way Trump could lose the election is if it were stolen from him. So, she said, some groups have discussed monitoring polls on Election Day, looking for signs of fraud.

As early voting centers opened in Maricopa County on Oct. 7, The Republic spoke with volunteers on lawn chairs outside a polling place in west Phoenix. The couple, who had driven from Orange County to volunteer, said they were with Mission for Arizona, which is funded by the Arizona Democratic Party.

A spokesperson for the party did not return a request to discuss the parameters of the polling place monitoring plan.

Election staff in Maricopa County have been trained to enforce election laws, including a prohibition on firearms within 75 feet of a polling place, said Scott Jarrett, the director of Election Day operations at Maricopa County.

If there is a problem staff cannot handle, Jarrett said, plainclothes Maricopa County sheriff’s deputies will be on standby to assist.

A spokesperson for the Elections Department said the county was not aware of any credible threats to polling places.

The Southern Poverty Law Center said anyone witnessing possible voter intimidation at a polling place could call its hotline: 866-OUR-VOTE.

After the election, discussion among these groups center around protecting their communities from left-wing protesters, particularly those affiliated with Antifa, the Southern Poverty Law Center expert said.

“There is a widespread belief that the left represents a domestic terror threat,” Miller said. “They plan to mobilize against it.”

Such a plan appears to have been created for the communities around Prescott, north of Phoenix.

A document prepared by Jim Arroyo of the Yavapai County Preparedness Club, and sent to The Republic by a concerned citizen, discussed the formation of neighborhood groups that would be set up to protect communities.

“How will you block your streets and how will you man guard posts?” the document read. “You will need roving patrols, both vehicle and foot patrols. In essence, you are guarding your homes from threats, both internal and external.”

Arroyo did not return a phone message at his home seeking comment.

A spokesperson for the Yavapai County Sheriff’s Office said the department was not aware of the document. The spokesperson said that it is illegal to block streets.

Arizona’s Department of Public Safety has a counter-terrorism information center, but a spokesperson for DPS would not comment on any possible operations of that unit.

Similar fears of post-electviolence were expressed at a QAnon conference in Scottsdale on Oct. 17, by a California man who leads a group designed to counter government-mandated business closures due to the COVID-19 pandemic. 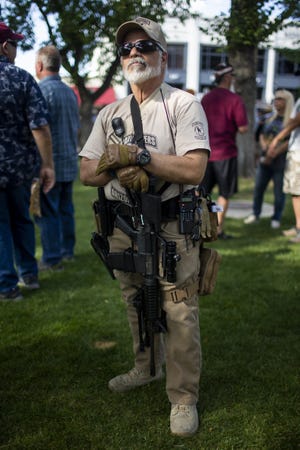 Alan Hostetter, director of the American Phoenix Project, said, “We’ve never been as close to (civil war) as we are today… and you have to be thinking like that.”

Hostetter’s words were surreptitiously recorded by the QAnon Anonymous podcast, in violation of rules set by the conference that asked journalists attending not to record or interview anybody.

Hostetter said he thought widespread violence would be averted with a Trump victory.

“It’s going to be such a huge victory that we will avoid violence by a landslide election, because the other side will be so marginalized at that point,” he said.

However, Arroyo laid out the exact opposite scenario at an Oct. 24 meeting of the Yavapai County Preparedness Club, the Prescott wing of the national Oath Keepers movement. Video of the meeting was posted on YouTube.

Trump, Arroyo said, was poised for a landslide victory. Arroyo said he was certain of this because he heard on the Rush Limbaugh radio program that Trump had a high approval rating and had improved his standing substantially among African-American voters.

He said Trump would win despite what he claimed were efforts by employees of the U.S. Postal Service, many of whom he said were liberal Democrats, working to sabotage the election by destroying ballots marked for Trump.

No facts support his assertion.

Arroyo said he feared that Black Lives Matter protesters and Antifa would cause civil unrest after Trump’s re-election and that residents needed to be ready to defend their neighborhoods.

“Lone wolves are not going to survive this,” he said. “Only well-trained, well-organized teams of individuals within neighborhoods are going to stand a snowball’s chance of getting through this coming conflict.”

Arroyo pointed to a Black Lives Matter rally held in the courthouse square of Prescott that summer as evidence that the group was finding its way into Northern Arizona communities.

Arroyo led a counter-protest of the BLM rally. Armed individuals outnumbered the Black Lives Matter supporters by a ratio of three-to-one.

The rally was organized by an 18-year-old African American teenager who described to The Republic how alarmed she became when she arrived at the courthouse square and saw her march, organized with an impromptu posting on Instagram, attracted so many counter-protesters.

“Oh my gosh,” she told The Republic. ”I gathered all the racists in town into one side.”

Arroyo, without evidence, offered a counter-narrative to how Prescott saw its first Black Lives Matter rally on Sept. 4. He said that protest was indicative of the larger movement probing the community to see how it would react.

“That’s why we made a show of force,” he said at the meeting, “to show that they might want to probe somewhere else.”

Arroyo said BLM protesters were not afraid of the police, but were afraid of his group, which he said they called “rednecks with guns.”

“We will take care of this on your terms,” he said, “and they know it and they’re terrified and they don’t want to deal with it.”

Arroyo said that he figured that Trump would call out the military to restore order in the streets. He said he would see how that played out and that his group wanted patrols ready in case help was needed.

Arroyo said that Trump had not yet imposed martial law to restore order in U.S. cities because he knew it would cost him the election.

“He needs to be re-elected to drain the swamp and utilize our military,” Arroyo said. He said that the military was likely champing at the bit to be sent into neighborhoods.

“When he releases that chain,” Arroyo said, “watch what’s going to happen.”

Arroyo told attendees that he expected disruptions in the food and fuel supply in the Prescott community, imagining that BLM or Antifa members might start blocking the highways into the area and killing drivers of semi-trucks, dissuading them from delivering to the communities.

“The threat assessment is real,” he said. “Antifa will come into your neighborhoods.”

The Yavapai County Preparedness Club functions as the local chapter of Oath Keepers, a national organization of military and law enforcement. Oath Keepers calls on those who took an oath as police officers and soldiers to defend the country against its enemies to be prepared to take up arms should the need arise.

Arroyo said he organized the group under a different name so it could incorporate as its own non-profit. The Yavapai County Preparedness Club received non-profit status from the IRS in 2019.

Arroyo described BLM and Antifa as well-funded arms of the billionaire George Soros. By contract, he said, his group was a non-profit that relied on donations. He acknowledged the donation bucket that was making its way through the crowd.

Arroyo recommended that everybody order a two-volume survivalist manual that sells for $96.49.

When an audience member asked whether the Oath Keepers national organization could buy them in bulk and send them out for local organizations to share, Arroyo questioned the man’s commitment to the cause.

As the meeting ended and people broke up to meet with their neighborhood groups, Arroyo made an announcement. He said he had limited supplies of military ready-to-eat meals available at $100 a case. Cash only.