Special for the Arizona Business Gazette

For most pet owners, their furry kiddos are not like family. They are family.

But veterinarian Brandon Prince wondered why the availability of animal care technology lagged far behind that of their human counterparts.

His effort to change that led him to join forces with veterinary surgeon Seth Bleakley to launch CARE Animal Surgery Center in Glendale. The center makes minimally invasive surgery practices like laparoscopy and procedures that target severe ligament injuries like a torn ACL available to cats, dogs and other companion animals.

“That was not something really available here in Phoenix. It was the standard of care in human medicine but not widely available in pet surgery and medicine yet,” Prince said of CARE, which he and Bleakley opened in March.

Bleakley added, “Human technology has developed so quickly that the veterinary field is trying to catch up.” 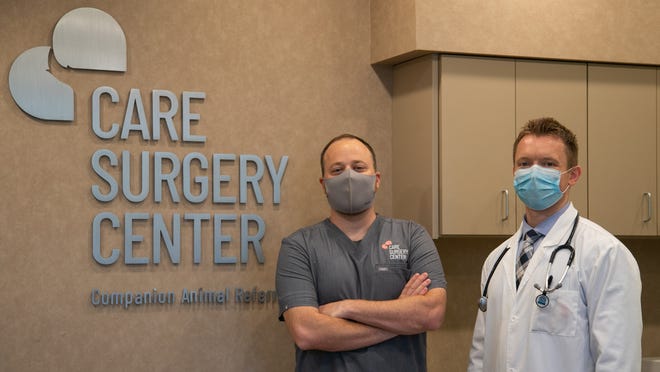 CARE is an extension of sorts to its sister practice Palo Verde Pet Clinic in Yuma, which Prince opened in 2017 and focuses on preventative medicine and wellness care.

As a result, CARE treats a high number animals referred by primary care veterinarians because it is perhaps the only surgery center in the Valley and one of two in the state with the equipment and expertise in this area, Prince said.

An average of three to four of these minimally invasive procedures are done on any given day, with Bleakley doing each one. This helps bring a very personalized and direct care for each patient and also ensures it’s being done consistently.

Bleakley earned his masters degree in veterinary clinical sciences and completed a four-year small animal surgical residency with a focus on minimally invasive surgery at Colorado State University, one of the handful of schools that trains in this type of practice.

Bleakley talked about an older dog that was referred to him by an oncologist for an abnormality with excess fluid in the pericardium around the dog’s heart. Common treatment consisted of opening up the dog’s chest, causing an immense amount of trauma during and after the procedure on top of the expected risks for a highly invasive surgery on a senior animal.

He instead conducted thoracoscopy, which requires just a keyhole incision, and took care of the problem with little stress or damage. The dog’s owner was from Gilbert and willingly made the lengthy drive across the city. The dog did well and went home the next day.

A Yorkshire terrier had a rock obstruction in his small intestine. He was referred by his owner’s family member, who is a veterinarian.

“She could’ve done the surgery herself but she wanted a standard of care that we could offer,” said Bleakley, who removed the rock with a laparoscopic approach.

Prince, whose expertise lies in emergency surgery, had referred his Yuma cases to Los Angeles or Colorado State due to the lack of someone willing or able to do them. With the ability to do those procedures, both centers have grown exponentially, with the revenue doubling due to treating animals rather than sending them elsewhere, he said.

It’s a reason that in a matter of months rather than years, CARE has become profitable, Bleakley said.

“It’s largely because we are different. We offer a higher level of care. It’s accelerated our success here,” he said.

Prince and Bleakley are part of a vital service to the 68% of U.S. households that have a pet, according to the American Pet Products Association. More than 60 million households have at least one dog, and more than 47 million own at least one cat.

Additionally, dog owners make an average of 2.4 veterinary visits a year while cat owners make 1.3 visits, according to the American Veterinary Medical Association.

Both doctors said they’ve seen an increase in visits and demand for these services since the onset of COVID-19 – likely due to the fact that pet parents are spending more time at home with their furry family members and take closer notice when something isn’t quite right. 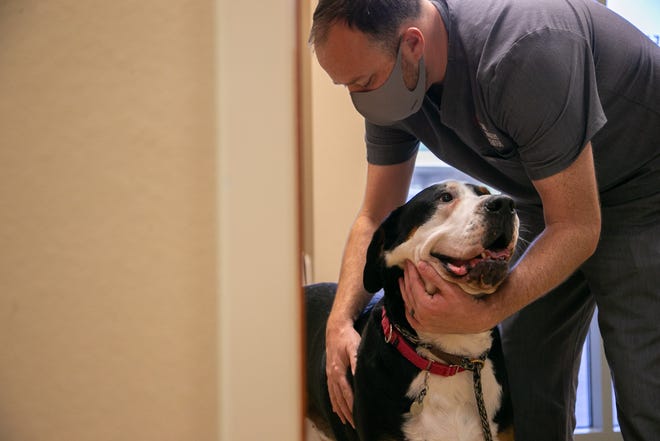 The less traumatic procedures mean that recovery time is shortened and pain is greatly reduced. Bleakley said that by preserving the blood supply around a broken leg, for example, bone healing can be reduced by weeks.

In this case, traditional treatment would’ve been to cut open the leg to expose the bone and put it back into place, Prince said. Instead, tiny 2-cm incisions are made and cameras provide an up close view while Bleakley performs the procedure. This yields a smoother post-op process. These techniques have been used on dogs, cats an on a 90-pound tortoise, who needed bladder stones removed.

Animals experiencing fractures feel back to their normal selves in a couple of days.

“The only problem is that patients are feeling too good,” Prince said, explaining that feeling great doesn’t mean that total healing and recovery are complete. “We’re needing to restrict them.”

‘They took care of our boy’ 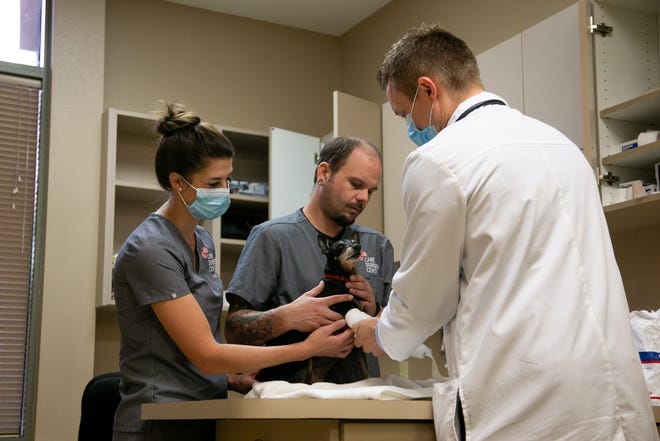 That’s what Jon Trzepacz is having to do with his 3-year-old pit bull mix rescue Gunner, who underwent knee surgery for a torn ACL about 14 weeks ago.

Gunner’s primary care vet could’ve done the procedure but suggested Trzepacz take him to a specialist. Research led him to CARE and Bleakley.

After surgery, Trzepacz said he anticipated Gunner to be whining and suffering in pain. He didn’t appear to be in any pain at all. The transition from initial recovery to life as usual was unexpectedly fast.

“He’s still in the rehab phase and building back muscle. He’s in no pain but we’re not letting him go full blown chasing squirrels,” said Trzepacz, who lives in Buckeye.

Entering new territory, Trzepacz had some apprehension before the surgery. But that disappeared after meeting Bleakley and the CARE team.

“You don’t know what to expect. Who’s going to be cutting open my dog? But his knowledge and the way he explained everything, he was very calm and relaxed and we felt comfortable … . (We thought), ‘OK we are in the right place to do this,’” he said.

When Trzepacz took Gunner back to get his sutures removed, Gunner, who is a little skittish and sensitive by nature, was afraid and did not want to go into the building. Trzepacz was worried that Gunner’s erratic movements would reinjure his leg. So, personnel met them just outside of the building and removed them there. Crisis avoided.

“They took care of our boy. They were flexible and understanding. They are good people,” Trzepacz said.

The center is the realization of a dream for Bleakley, who has wanted to open a practice dedicated to this type of surgery that was not in existence 20 years ago.

Bleakley and Prince knew each other while both were at Colorado State University. Bleakley helped train and mentor Prince. Years later, when Prince wanted to open CARE, Bleakly was his first call.

“This is our focus and this is what we specialize in and that’s what makes us different,” Bleakley said.

Business bottom line aside, the ability to offer this level of care and relief to patients and two-legged parents is their real reward.

“There’s less emotional trauma along with the physical pain pets have to go through. Our pets don’t understand why it hurts. That’s the great advantage of what we do,” Prince said. “It makes for happy patients, happy clients.”

Factoid: More than 85 million families in the United States own at least one pet, according to The American Pet Products Association.