Early voting is winding down, and Election Day is Tuesday. The uncertainty is weighing on Arizonans.

A steady stream of voters filed in and out of the Tempe History Museum near Southern Avenue and Rural Road at 11:30 a.m. Friday to drop off mail-in ballots or vote in person.

Among them was 71-year-old Jim Osbourne, who was dropping off his mail-in ballot.

Osbourne described himself as a “very staunch Republican” who wants to see President Donald Trump re-elected, saying he believes Trump will do more for retirement-age Americans like himself. 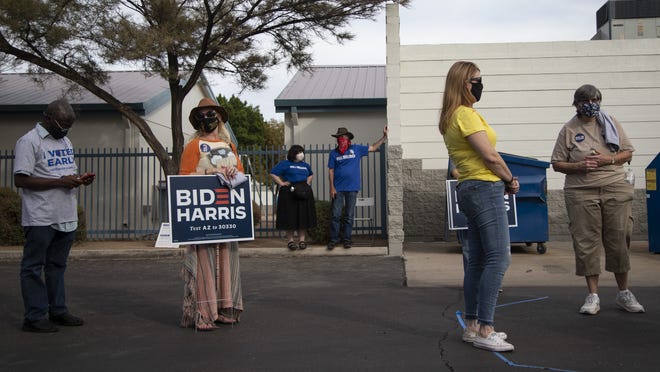 Though he was in and out of the voting center quickly, he said he doesn’t think the counting process will run as smoothly.

“I think this will be a mess,” he said, adding that he suspects a winner won’t be determined for at least a week after Election Day.

Ahmed works in health care and said she believes problems that she sees, such as understaffing, would be better addressed in a second Trump administration than a Biden administration.

Ahmed was optimistic about the country’s future, saying she believes political divisiveness will eventually go away after the election.

“We all gotta be one, one day,” she said. “We can’t have this hatred toward people. We all have the same blood. We bleed the same and I think we all should just get along and not have so much hate.”

Because it was her first time voting, Ahmed said she had some questions that were quickly addressed by poll workers. The entire process took less than 10 minutes. 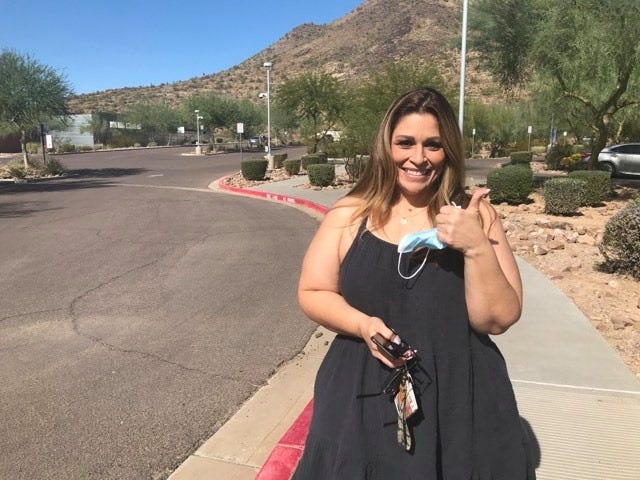 At Glendale Community College North near 55th Avenue and Happy Valley Road, 50-year-old Selina Gonzales dropped off her mail-in ballot. She said she felt it was a “more secure” option than putting it in the mailbox.

“Honestly … I’ve known for four years who I was gonna vote for — anyone other than the current president,” she said.

Gonzales is a registered Democrat but said she has voted for Republican presidential nominees in the past. That wasn’t an option for her this year, though.

Among the reasons for her vote against the president were his handling of the coronavirus pandemic, his response to the Black Lives Matter movement and civil unrest, as well as fears about would happen to healthcare if he is re-elected.

Gonzales said she believes Trump “pits everyone against each other,” adding that she worries the divisiveness in the country will boil over on Election Day.

“I’m absolutely scared,” she said. “I’ve decided that Election Night, I’m not going to watch it. I will wait until the next morning because … I don’t want to lose any sleep that night.”

She said she doesn’t know what the future holds for the country, but she hopes unity can come sooner than later. 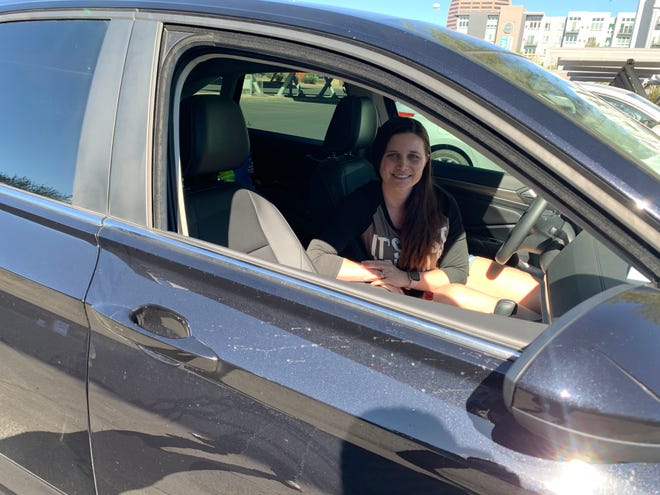 Ashley McWhirt, 31, turned in her mail-in ballot at Burton Barr Central Library near downtown Phoenix, saying the most important vote she cast was for the president.

McWhirt is in the Marine Corps and said the military, as well as law enforcement, were among the issues she thought about when making her voting decisions.

“I just want to make sure that we have the right person in charge, taking care of not only the service members but our people, and make sure they’re gonna do the best thing for us,” she said.

McWhirt said she encourages people to educate themselves on all of the issues and candidates on the ballot. She then echoed earlier wishes for a peaceful response to the outcome.

“I know not everybody’s going to be happy, but I think as a country we kind of just need to band together and kind of just deal with whatever hand we’re dealt,” she said.

This was 23-year-old Jordan Iglesias’ first time voting in a presidential election.

She discussed the importance of this election and said she hopes justice – including racial, climate and social justice – is served in the results.

“This election has human rights on the line in every way,” she said. “We have kids in cages, we have a climate emergency, we have a president who doesn’t necessarily speak for the people and try to keep our communities safe.”

Iglesias pointed out the large minority community in Arizona, saying she hopes candidates who represent the diversity of the state are put in office.

“People are angry and it is time to act now and get good representation that speaks for our communities,” she said.

Iglesias said she’s been making sure everyone she knows is registered to vote and has a voting plan for this election, adding that she hopes everyone else does the same.

“There’s so much division with this one, and I hope whatever the outcome is, we can find more unity as a country because it’s just kind of a bummer being so divided all the time,” she said.

Smith said some of the issues she deeply cares about are those impacting women and people of color, but said she doesn’t believe anyone should be a single-issue voter because “you miss so much of the picture when you just focus on one thing.”

No matter what the outcomes are of the various races throughout the state and nation, Smith hopes bipartisanship prevails afterward.

“At the end of the day nobody can change anything by themselves and if we don’t find a way to work together and meet in the middle we’re just going to continue down this path of bickering and fighting, and that’s not good in any situation,” she said.

She voted early because she plans on volunteering at the polls on Election Day. Smith said she hopes others also choose to get more involved in their local communities, where she said they can oftentimes make a greater difference than they could on a nationwide or worldwide level.