By Helena Oliviero, The Atlanta Journal-Constitution

Inadequate testing and lagging test results have crippled efforts to track and contain the COVID-19. But there’s another force hindering the ability to fight the disease in Georgia: a strong resistance to contact tracing.

In the Northwest Health District in Georgia, public health authorities reach only about 60% of people who test positive, and at least 70% percent of them refuse to cooperate and share basic information, such as identifying others they may have exposed and infected, according to Logan Boss, public information officer for the 10-county district and includes Paulding, Bartow and Floyd counties.

“It’s frustrating, but we do the best to our ability,” Boss said. “When we do talk to people, they are very reluctant to provide contact information and don’t follow our directions very well.”

“Contract tracing, in my opinion, is a piece of the whole structure and it is indispensable,” said Dr. Otto J. Ike, DeKalb County’s chief epidemiologist. “Without contact tracing, it would be virtually impossible to stop the spread of the virus.” 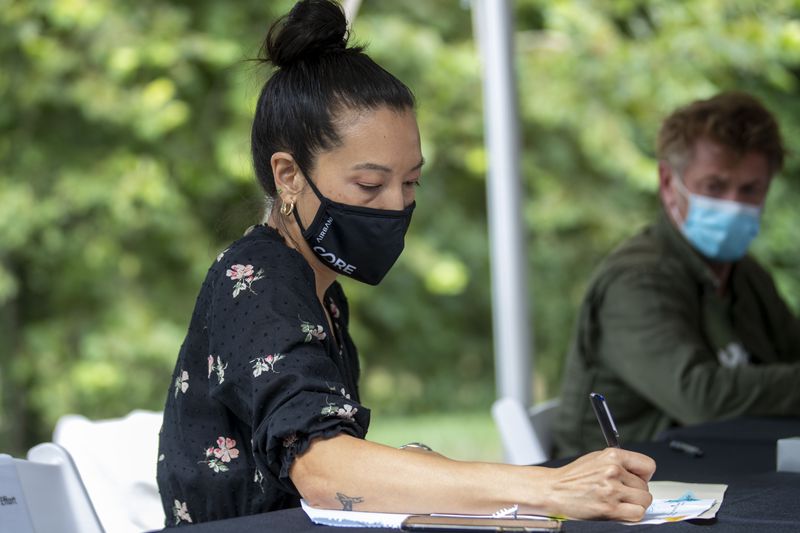 But as Georgia surpasses 350,000 cases of the new coronavirus and with well over 1,000 new cases every day, as clusters have emerged at churches and schools, weddings and funerals, backyard barbecues and youth sports events, public health experts say contract tracing in Georgia and across the country has been largely failing.

“Looking back, we have done an awful job of successfully doing this,” said Dr. Harry J. Heiman, a clinical associate professor at the Georgia State University School of Public Health. “We know this approach works, but I think it was clear to those in public health we didn’t have a plan early on, and it was doomed to fail.”

Still, Georgia public health officials say they are committed to figuring out how to get Georgians more comfortable with the concept and to boost its success. Dr. Kathleen Toomey, the state’s commissioner of public health, said in an interview with The Atlanta Journal-Constitution she was encouraged by new approaches and ideas being implemented at health districts to improve the success rate. 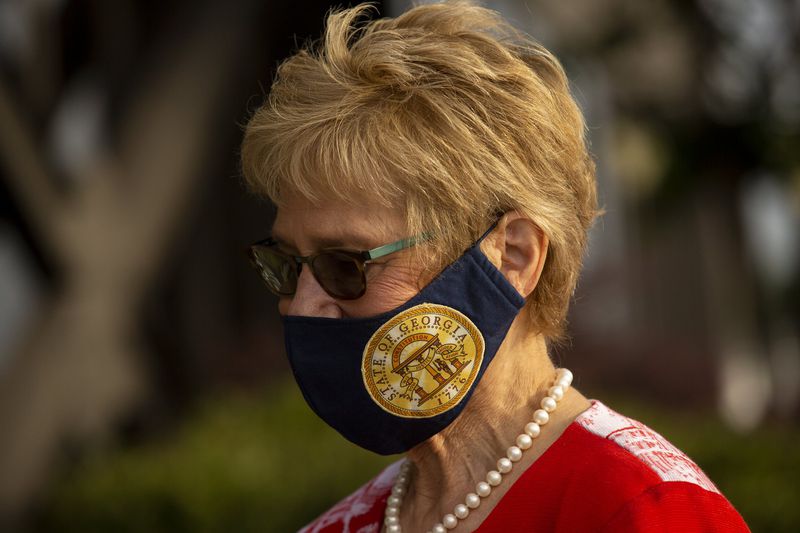 Overall, Georgia currently has a team of 1,570 contact tracers, including case investigators who are in charge of contacting and interviewing the person who tests positive, according to information obtained by The Atlanta Journal-Constitution. Statewide, from May 15 through Oct. 22, the team of tracers connected with about 80 percent of the people who tested positive, according to the Georgia Department of Public Health.

But those conversations only led to a paltry number of close contacts exposed to the virus. While 162,845 close contacts were identified by those testing positive, only 54,078 people were reached and only 40,024 agree to participate.

That’s only one person for every six people interviewed.

Contact-tracing efforts in Georgia and across the country have been stunted by delayed testing results and a quickly spreading virus beyond the scope of what the existing number of tracers can handle.

And while people in some other countries may consider participating in contract tracing a civic duty, raging mistrust in the government and misinformation about the virus here also thwarts efforts. Some people may be concerned cooperating may get them in trouble with their bosses or force them to miss work. Immigrants may fear contact tracing could lead to deportation, although DPH has stressed they will not ask about citizenship or immigration status and will keep information about contacts confidential.

Georgia’s effort also has been hampered by lack of a comprehensive plan and failure to dedicate enough resources for contact tracing, Heiman said. What’s more, he said the state also lacks an effective communication plan to gain trust. And he believes the reopening of Georgia too early and too aggressively also stymied contact tracing efforts. 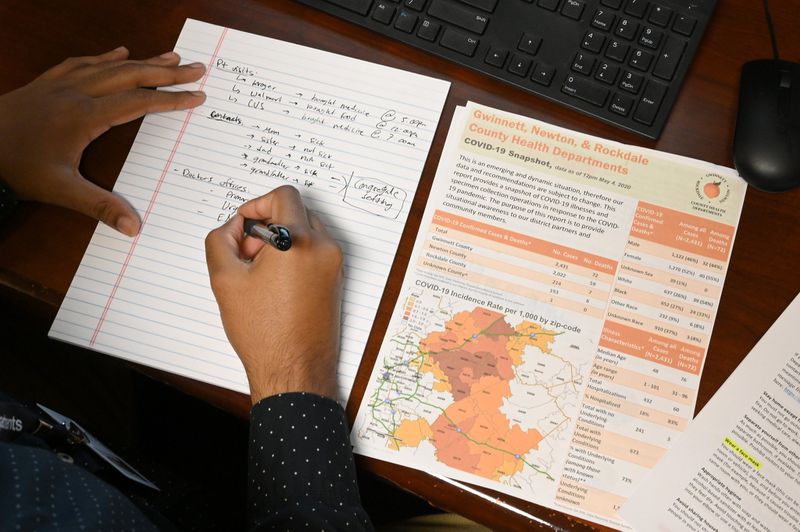 To some, that was another signal that the threat from the virus was exaggerated, fueling resistance to contact tracing and other measures to control the pandemic. Meanwhile, public health experts say efforts have been undercut by the administration’s failure to set an example and advocate for contact tracing.

One piece of the puzzle

The Centers for Disease Control and Prevention estimates 40% of coronavirus transmission is occurring before people feel sick. Patients who are presymptomatic or asymptomatic can still spread the virus to others, making it extremely difficult to trace chains of transmission.

In addition, public health experts say many asymptomatic people who are identified as positive through surveillance programs are likely to be tested after they’ve passed their transmissible period of time, which means contact tracers are potentially going down the wrong trails for contacts.

Dr. Michael Mina, assistant professor of epidemiology at the Harvard T.H. Chan School of Public Health, estimates surveillance and contact tracing is probably only capturing about 5% of people who are infected in time to stop them from transmitting to others.

Experts say, though, that contact tracing doesn’t need to be anywhere close to perfect to be useful.

“If I told you masks were only 80% effective, should we stop wearing masks? Of course not,” Heiman said.

He said contact tracing is just one part of a strategy that needs to happen in conjunction with other measures including robust testing, mask wearing, and self-isolation by people who have been exposed to the virus. Enforcing the restrictions on large gatherings must also take place, he said.

Toomey, the state’s commissioner of public health, said that contact tracing is still a very effective, “almost essential tool among other tools to address COVID-19.”

She said the approach has proven particularly successful in containing outbreaks at schools and in helping reach people who may be at high risk for severe illness.

Health officials are making adjustments to make contact tracing more effective, she said. For example, in the South Central Health District in Georgia, which comprises 10 counties, the hiring of locals to do contact tracing has helped in getting people to engage, she said.

In Fulton County, Toomey said, case investigators and contact tracers have partnered with the non-profit CORE (Community Organized Relief Effort) to help link people with social services and have been going to people’s homes to interview them. That also allows the team to test the household contacts of the person who is infected.

“We are going back to old contact tracing methods, and it’s face to face, mask to mask, and we are having success with that,” she said.

In DeKalb County, Ike said that in recent months they’ve been able to dramatically improve their ability to connect with people who test positive, and now reach about 99 percent. The percent of contacts participating has also been rising and is now close to 60% he said.

The effort became more successful after contact tracers started having access to interpreters by phone to help them communicate with non-English speakers. Caseworkers and investigators are also working more flexible schedules, including evenings and weekends, to help connect with more people.

Another step that is helping is that landlines now identify calls from case investigators or contact tracers as coming from the “GA COVID TEAM.” Cell phone identification varies by the individual receiving the call, their carrier, and personal preferences, but in some cases “GA COVID Team” does appear.

DeKalb County is also seeing something else: People there, who are more likely to wear a mask than those in more rural parts of Georgia, are also more likely to engage in contact tracing.

For Toomey, the reluctance, even hostility, toward contact tracing and other measures, such as mask-wearing, remains one of the biggest surprises of the pandemic. She is stunned that some people this as violating personal liberties. She certainly doesn’t see it that way.

“I see them as allowing us to get back to normal faster,” she said.

Contact tracing has been key in efforts to curtail smallpox, HIV, ebola, and other viruses in past outbreaks.

In Georgia last year, health officials turned to contact tracing to successfully contain a measles outbreak in Cobb County in a matter of weeks: cases were limited to three families, with 11 people infected.

Here’s how contact tracing works with COVID-19: Tracers contact a person who tests positive, ask for information about their close contacts and then urge those contacts to quarantine for 14 days, report their symptoms and get tested. Contract tracers also can answer questions and educate people about the disease.

Tracers don’t share the name of the person who may have exposed them. The process is anonymous and confidential.

The change could prompt health departments to do contact tracing in cases where exposure might previously have been considered too brief.