Sen. Mike Lee drew criticism from members of The Church of Jesus Christ of Latter-day Saints this week after comparing President Donald Trump to Captain Moroni, a heroic and selfless figure in the Book of Mormon.

“To my Mormon friends, my Latter-day Saint friends, think of him as Captain Moroni,” Lee, R-Utah, said during a Goodyear rally Wednesday as he pointed to Trump in front of a large crowd of mostly maskless supporters. “He seeks not power, but to pull it down. He seeks not the praise of the world or the ‘fake news,’ but he seeks the well-being and the peace of the American people.”

In the Book of Mormon, Captain Moroni is described as a virtuous, selfless man who did everything in his power to serve and care for others, according to Yasser Sanchez, a member of the church who is supporting Democrat Joe Biden for president. Captain Moroni is a different figure from the angel Moroni, whose statue sits atop many Mormon temples today.

“(Captain Moroni) sought to do good to serve others and to protect the freedom of others, which are the complete opposite characteristics of traits that (President) Donald J. Trump has,” Sanchez said. “I don’t think anyone who is honest with their understanding of what Captain Moroni was saying would say ‘this is a person who we should compare (President) Donald Trump to.’”

Despite the comparison to Moroni, Sanchez said the use of his religion for political purposes is a larger problem.

“The issue is cheapening one’s faith to promote a political candidate who doesn’t reflect the values of that faith,” Sanchez said. “You don’t use sacred sites and things that are important to us, such as the name of our church, for cheap political points.”

Sanchez, a member of the organization “Arizona Republicans for Biden,” criticized Tuesday’s “Latter-day Saints for Trump” event for using the Gilbert Arizona Temple as a backdrop for the rally, given that political events cannot be held on temple grounds. The event was held at a nearby park with the temple in the background.

Sanchez emphasized that his views are his own and do not reflect the views of the Mormon Church, which does not endorse political candidates. 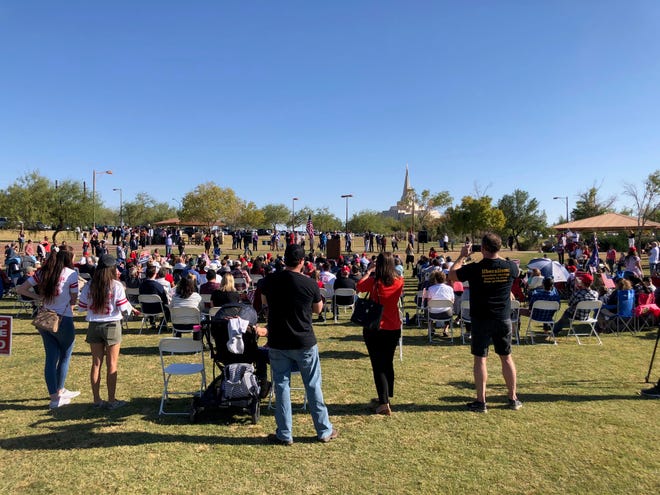 In August, the “Latter-day Saints for Trump” organization removed a photo of the Salt Lake LDS temple from their website after receiving blowback from LDS members on social media.

Taber said he was shocked, but not surprised when Lee compared Trump to Captain Moroni on Wednesday.

“For those of us who are not ‘in the bubble’ of being Trump loyalists and being on the far right, this idea that (President) Trump is humble when he’s ratings-obsessed, it just doesn’t make sense for us,” Taber said. “I think that’s why so many Latter-day Saints, regardless of their political beliefs or where they fall on the political spectrum, found the comparison to be so jarring and why it’s been so shocking.”

Taber said politicians should be “very, very careful” on how and when they use scriptures and quotes from church leaders. Taber pointed to Lee’s inclusion of the term ‘fake news’ while he was invoking scripture as another issue he had with his remarks.

“‘Fake news,’ the way it’s used by the president and (Senator) Mike Lee, where he only wants his own interpretation to be in power, really goes against the spirit of the Constitution,” Taber said. “To be changing scripture to attack the First Amendment in that way really does a disservice to the teachings and to civil society.”

Lee responded to the criticism of his comments in an extensive post on his personal Facebook page.

In his explanation, Lee clarifies that he did not suggest nor believe that Trump is a “prophet” or that he should be regarded as a religious leader. 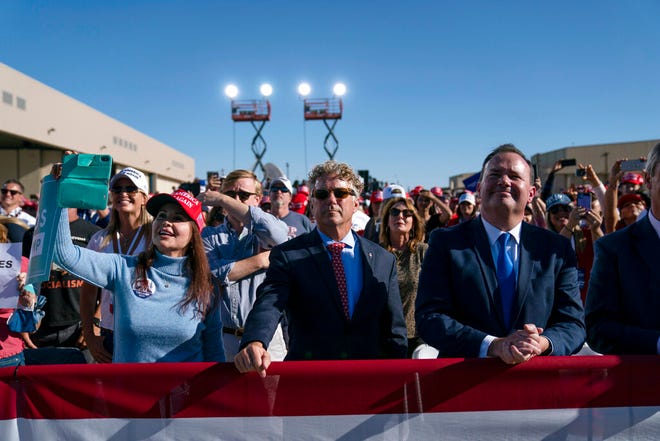 “Some people found that comparison upsetting, blasphemous, and otherwise wrong. I respect their right to feel that way, and realize that my impromptu comments may not have been the best forum for drawing a novel analogy from scripture,” Lee said in the post. “In no way did I suggest that people should seek to emulate President Trump in the same way they might pattern their lives after Captain Moroni.”

Lee then listed some of the president’s accomplishments and tried to compare them to language used in the Book of Mormon about Captain Moroni.

“Translating Captain Moroni’s language into Donald Trump’s, he has relentlessly tried to ‘drain the swamp’ — for example, by avoiding new wars while winding down existing ones, reducing federal regulations, relieving the federal tax burden on working families, and reforming the criminal-justice system,” Lee wrote in his post.

Taber said that church members should follow the ethical guidelines set forth by the Mormon Church to keep politics out of their faith.

“We all have to figure out how to live together in a politically diverse church,” Taber said. “These guidelines about not trying to weaponize or exploit our shared faith are really important so that we can continue in fellowship and continue to work together and when Senator Lee does these kinds of things it’s hurtful and it’s harmful.”