Mapillar Dahn stands for a photo in her garage, which doubles as her workspace, at her residence in Hampton, Monday, October 12, 2020.

By Leon Stafford, The Atlanta Journal-Constitution

For Mapillar Dahn, each day is a new challenge.

She wakes up to a text from her niece’s Clayton County School that the child’s login credentials for remote learning aren’t working. Dahn gets on the phone and after several minutes with IT, all is well.

Dahn then rushed out the door to Children’s Healthcare of Atlanta’s Scottish Rite hospital. Her 15-year-old gets a transfusion every month to battle sickle cell anemia and today she is undergoing lab work. The transfusions are critical because without them she could have a stroke.

When that is done a new problem arises. Another niece in Dahn’s care has turned off her laptop camera. She too is learning remotely and the teacher says she believes the child is not actively in class. The class is taking a test, but the niece has been on the same question for 20 minutes.

As the coronavirus has continued unabated, thousands of parents like Dahn are struggling to continue juggling their roles as caretakers, breadwinners and now, teachers, metro Atlanta parents and experts say.

Many report exhaustion, anxiety and decision fatigue that mental health experts say could have far-reaching consequences, including eating disorders and depression.

“I woke up feeling a bit stressed and borderline overwhelmed,” Dahn wrote in a recent diary entry. “Trying not to feel overwhelmed because I tend to shut down in that state.”

The Atlanta Journal-Constitution spent more than a month getting to know Dahn, 37, a Liberian immigrant who moved to Georgia in the 1990s, as well as her family, which includes three daughters, two nieces and her mom, Bernice Dahn, 60.

Dahn, who runs a foundation for sickle cell anemia awareness, agreed to keep a periodic diary of her daily life to share with readers for the rest of the school year. (Read some of her diary on ajc.com)

What unfolded has been a peek into how a metro Atlanta family is navigating the daunting task of daily life in a pandemic that has upended routines and brought with it anxieties and challenges many are still trying to grasp.

“I stop, I breathe, and just keep it going,” she said. “My life was busy already outside the pandemic with the foundation and raising the girls, so I just buckle down. I have no choice.”

Christina Grange, an associate professor of psychology at Clayton State University, said Dahn is not unique. Increasingly parents and caretakers feel backed against the wall to take on responsibilities they never planned.

“People talk a lot about the kids, but what we know is that if parents aren’t stable, nothing is stable,” Grange said. “The hardest things for families to reconcile, particularly parents, is we don’t know when the consequences of COVID-19 are going to end.”

For Dahn, the challenges are exacerbated by sickle cell anemia. Her three daughters — Tully Tyler, 16, Khadeejah Tyler, 15 and Hajar Tyler, 11 — all suffer from the disease, a red cell disorder that predominantly affects Black people and most associate with pain as its chief symptom. Dahn and the girls’ father, who lives in DeKalb County, carry the trait, but do not have the disease. 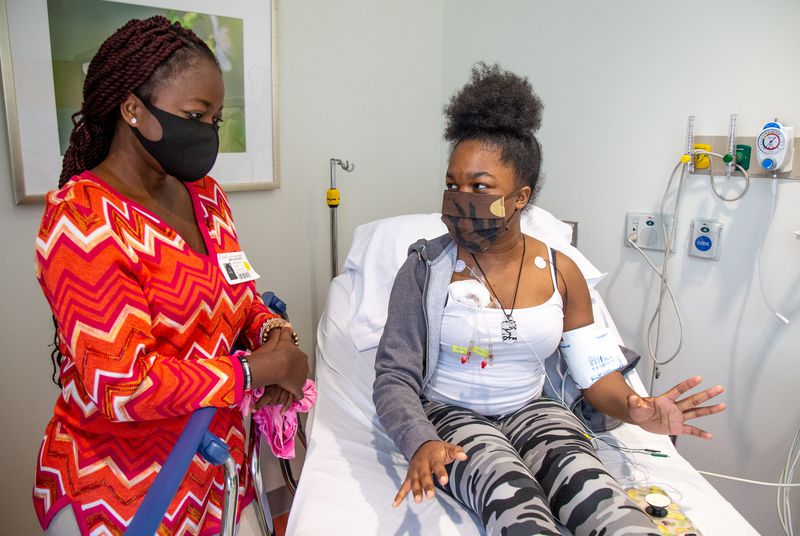 Tully and Hajar’s symptoms are generally mild, with Hajar asymptomatic and Tully sometimes experiencing pain that is bad enough to force her to be hospitalized, Dahn said. Khadeejah, however, requires monthly transfusions because at six she had a stroke and the interventions help prevent a recurrence.

Early in the pandemic, it became harder to get the transfusions as hospitals were filled with coronavirus patients and supplies of blood ran thin.

“It was very tough for a while, but it’s getting better,” she said. “It is so hard scheduling without a pandemic. I never imagined that we would face this kind of disruption.”

School in the dining room

It’s Tuesday at Dahn’s home and class is in session on computers spread out in the dining room and the breakfast nook. Clayton County Schools are all-virtual so far this year and the district’s board of education has shown little enthusiasm for changing that.

In addition to Dahn’s daughters, her nieces, M’Cayla Dahn, 8, and Cayden Dahn, 11, are also here. They are living with their aunt while their mother is in the U.S. Army and stationed in Germany.

Hajar has become distracted and is talking about zodiac signs, which leads to big sister Tully to step in and try to get her back on task.

“Hey, how is your classwork going?” Tully asks. “Aren’t you supposed to be in school?”

A dejected Hajar turns back to her computer and falls silent.

Dahn appreciates the help. Of everyone, Hajar misses school the most, Dahn said. As a student in an individualized education plan (IEP), she has struggled with not having the amount of one-on-one time with her teacher that she’s had in the past. 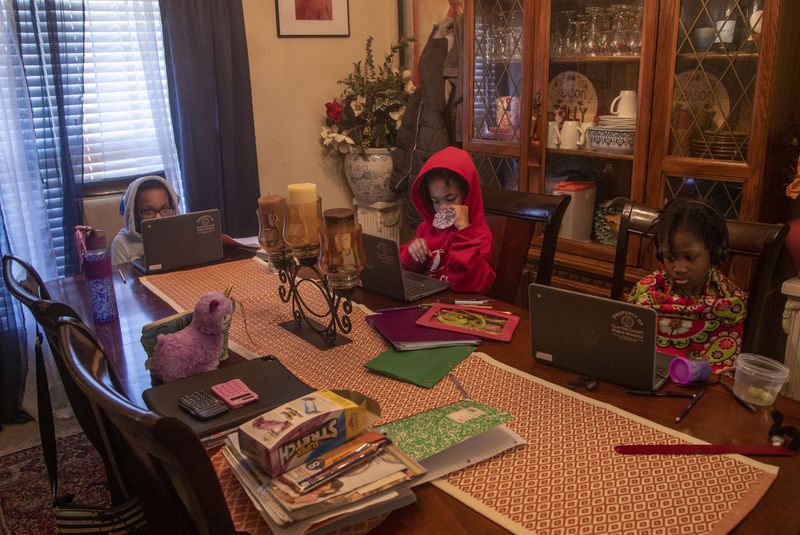 When Hajar doesn’t understand something and can’t get the teacher’s attention, she loses focus and seeks out activities with which she is more comfortable, Dahn said.

“She needs a lot of extra support and academically, it’s been tough,” Dahn said.

Khadeejah and Tully are wearing a one-piece pajama set and hoodie over shorts respectively. Learning remotely has enabled them to ditch school clothes for their ultimate comfort garments, especially since both eschew appearing on camera during class.

“They know I’m there, they just don’t see me,” Tully said. “I also realize since this whole thing started, jeans are very uncomfortable.”

“It’s a privilege if you see me,” Khadeejah shoots back.

Like most teens, they want to socialize with friends and miss the variety of being able to see something other than their bedrooms or other parts of the house.

But they are happy they don’t have to put their health at risk to get an education.

Dahn said remote learning has helped Khadeejah blossom. Because she struggles the most with sickle cell, she has had periods where she would be gone from classes for several days to address her illness. That would make her stand out, which causes anxiety.

“Because everyone is in the same situation, she does not feel picked on or singled out,” Dahn says. “She’s more focused and organizers her thoughts better.”

In the evening hours, Dahn switches to work mode. As the founder of MTS Sickle Cell Foundation, a Clayton County nonprofit she started in honor of her daughters, Dahn travels the nation educating communities, governments and schools on the disease.

“I quit corporate America about 10 years ago to focus on my children’s health,” she said.

Dahn kept her diary over two weeks beginning in September. The entries include the challenges that everyone has faced, such as getting a car repaired, to more unique problems such as installing a billboard in Clayton County to bring awareness to sickle cell anemia.

A lot of it, however, focuses on the five girls as they learn at home during a school year that is like nothing most of us have ever seen.

In one entry, she recalls a chat with someone struggling with home schooling more than she is.

“I spoke to a friend of mine who too is having a tough time with virtual education in another county,” she writes. “Just listening to his and his daughter’s experience made me feel less of a failure.”

While Dahn’s circumstances are atypical of most households because of her children’s health conditions, the stress the pandemic has put on her is playing out across the nation, said Dan Whitaker, associate dean for research and faculty affairs in Georgia State University’s School of Public Health.

Many parents who can work from home feel overwhelmed trying to monitor their children’s classroom while also keeping up with their own job routines. Those who have to go in to jobs carry an even heavier burden trying to arrange places for their kids to learn when they can’t be at home. 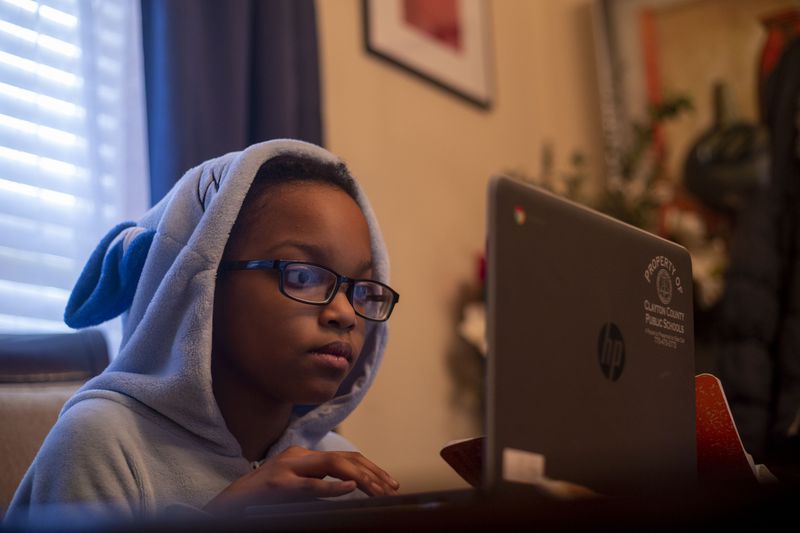 Schools are making up the playbook as the year goes along.

“This is all new to teachers, too,” Whitaker said. “They are not as focused on how the students are doing and who’s paying attention because all their attention is going into making sure the technology is working.”

Some parents have tried to maintain a sense of normalcy.

“I have my kids put on their uniforms everyday just as if they were going into school,” said Robbie Cotton, who has a son and daughter at Edmonds Elementary School in Clayton County. She added that the move is critical to making sure they take their remote education seriously.

“They protest because they don’t understand the reasoning,” Cotton said. “I’m trying to keep that school day structure and let them know that although they are home, they are still in school.”

Dahn is attempting to create that environment, too. She juggles appointments, checks to make sure everyone is online for class in the morning, and makes herself available to teachers who might tell her something she missed.

“We have always walked on egg shells in this house,” Dahn says. “Because there are odds of three whole human beings getting sick. This is just my life.”