Arizonans going to the polls on Tuesday will want to remember what key items to bring and what to leave at home.

Here’s what election officials say you should (and shouldn’t) bring to the polls on Tuesday.

What can/should you bring?

A voter must have a valid form of identification to receive a ballot, according to the Arizona Secretary of State’s Office. That could be a:

Tribal enrollment card or other form of tribal identification.

Any other valid U.S. federal, state or local government-issued identification.

If your Arizona driver’s license expired after March 1, 2020, your license still should be accepted as a valid voter ID, per an executive order by Gov. Doug Ducey.

Residents without a valid driver’s license should bring two alternate forms of ID that shows their name or address, such as a utility bill dated within 90 days of the election or a valid Arizona vehicle registration. See a full list from the Secretary of State here.

Service dog allowed, and other accommodations

Voters with disabilities can bring a service animal to the polls. Voters also can bring someone to assist them.

Voters are allowed to bring their children with them to the polls, but most others outside of voters and election officials must abide by a 75-foot perimeter around each voting location to create a safe place to vote. 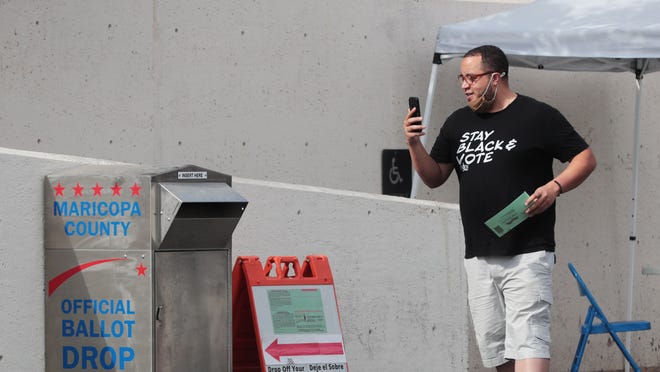 Masks are available to voters who did not bring them.

State and county officials strongly encourage voters to wear masks to keep other voters and poll workers safe in the COVID-19 pandemic.

Leave it at home or in the car

Arizona law prohibits residents from carrying open or concealed firearms or other weapons to polling places on Election Day.

The Secretary of State’s Office issued guidance last month about the rules in place at polling locations in an effort to discourage voter intimidation.

“Voter intimidation in any form will not be tolerated,” Secretary of State Katie Hobbs said. “Poll workers are trained in how to respond if intimidation occurs at a voting location.”

Voters can wear clothing and other garb touting their favorite candidate or cause, but poll workers, observers and election officials cannot.

Voters may see candidates or volunteers making last-minute pitches outside polling locations, but all campaign-related activities must stay beyond the 75-foot boundary surrounding voting centers.

This means voters should refrain from handing out campaign materials, talking to other voters or poll workers about candidates or issues, or attempting to influence the election in any way inside the polls.

It is illegal to take photos or videos within the 75-foot radius of polling locations. Voters who are found trying to influence votes or taking photos within the boundary could be guilty of a class 2 misdemeanor.

So, if you’re going to take an Election Day selfie, do it more than 75 feet away from the polls.

If you see issues

Voters can report any issues at voting locations on Tuesday to the Secretary of State’s Office at www.azsos.gov/IncidentForm or by calling 1-877-THE-VOTE.