Election Day is over and results are still trickling in from Arizona’s races, but a few things seem clear and noteworthy.

Here’s what stands out in the unofficial results as of late Tuesday.

For decades, Democrats running statewide tried to survive Election Day in Maricopa County. The county’s long history of voting Republican, however, seems to have ended in 2020.

President Donald Trump lost the county by more than 100,000 votes, according to unofficial results.

The sheriff and county attorney are in Democratic hands. And state legislative races in the county were favoring many Democrats, too.

This is a sea change in Arizona politics moving forward, especially with Pima County already a stronghold for Democrats.

The GOP needs to become more competitive in Maricopa County quickly or the state will shift more fully to the left like Virginia and Colorado have in presidential politics.

That builds on the 2018 win of another self-styled centrist, Sen. Kyrsten Sinema, when she narrowly defeated McSally.

Trump won the state in 2016 with 48 percent of the vote, a 3.5 percentage point margin over Democrat Hillary Clinton. It was the lowest margin for Republicans in Arizona since Bob Dole lost the state in 1996.

Much like Sinema, Kelly cast himself as a moderate willing to work with Trump and Democrats to advance the interests of Arizonans, namely on lowering prescription drug prices and rebuilding the nation’s infrastructure.

Arizona is a big key to the presidential race

As election night dragged on, it became apparent that Arizona was crucial to keeping in place a path to the White House for Biden.

The Associated Press called the state for Biden shortly before 1 a.m. Wednesday, which seems fast compared with the dayslong counting that unfolded in 2018.

Biden led handily in early results. But with about a million votes left to count, Fox News called the race for Biden, prompting criticism from Trump’s campaign and other Republicans that the network had made the call too early. 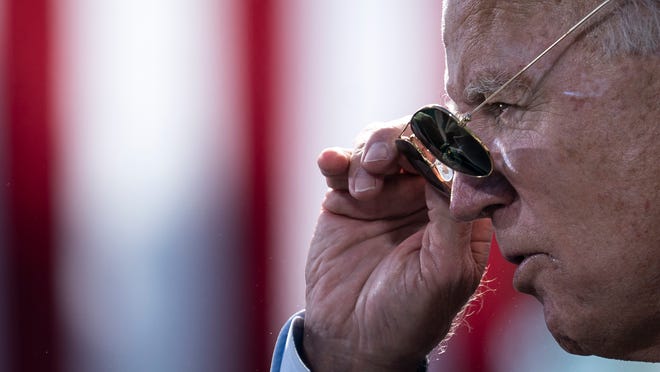 Kelly struck an optimistic tone about his prospects relatively early in the night. Trump also tried to sound one about Arizona in his address from the White House.

It remains to be seen whether lawsuits will still factor into the final results.

Arizonans are familiar with the process of counting the votes: In 2018’s Arizona Senate race, for example, it took six days for the race between McSally and Sinema to be called.

The share of registered voters who cast ballots could break a record, and the raw numbers of ballots likely did. Considering it happened in the midst of a pandemic, it speaks loudly to voter energy in a state that was groomed as a battleground throughout the year.

One reason for that is Democrats showed up in very sizable numbers. Ballots returned before Election Day showed Democrats within 1 percentage point of Republicans. That has never happened before.

One thing that remains to be determined is how many first-time voters took part, and how much Latino turnout changed from years past. But it’s clear many people wanted to take part.

Both of the state’s ballot measures had the support of voters, according to unofficial results late Tuesday.

By their nature, each of the propositions appealed to a more-liberal electorate.

Proposition 207 would legalize recreational marijuana and scrub past criminal convictions for minor drug offenses. Arizonans appeared on track to approving the measure despite a previous effort to legalize marijuana for recreational use that failed.

Proposition 208 would raise state income taxes on wealthy taxpayers to help boost spending on K-12 teacher salaries and other certified employees, like counselors and nurses. The money would also help hire and increase salaries of student support staff, pay for career and technical education programs, and help retain and mentor teachers.

While political pundits wanted to see if Arizona could move to purple status, the measures are pushing a more liberal agenda that suggests a shade of blue.

It’s worth noting that voters have done this before. They passed measures to legalize medicinal marijuana, make annual adjustments to the minimum wage and raise taxes for K-12 multiple times in years past.