Arizona was the first state to flip in the presidential race; all other states with declared winners mirrored their 2016 outcomes. But several key swing states remained up in the air Wednesday morning.

The unusual voting patterns showed Democrats and Republicans with close margins heading into Election Day, a departure from a typical Arizona election when Republicans head into Tuesday with an advantage.

Gov. Doug Ducey, a Republican, cautioned against declaring the state a Democratic win after the race was called.

“I’ll say it again: Let’s count the votes, and let the people decide rather than making declarations,” Ducey said in a Twitter post.

The last presidential election saw Arizona on the verge of competitive for Democrats. Trump’s margins in his 2016 victory in Arizona were much thinner than the Republicans before him. He carried the state by about 3.5 points.

Elsewhere in the country, Trump and Biden each claimed early and predictable state calls, with Trump projected to win Kentucky, Tennessee, Mississippi, Alabama and North and South Dakota. Biden locked down a slew of blue states in the Northeast, including his home state of Delaware, Massachusetts, New Jersey and New York. 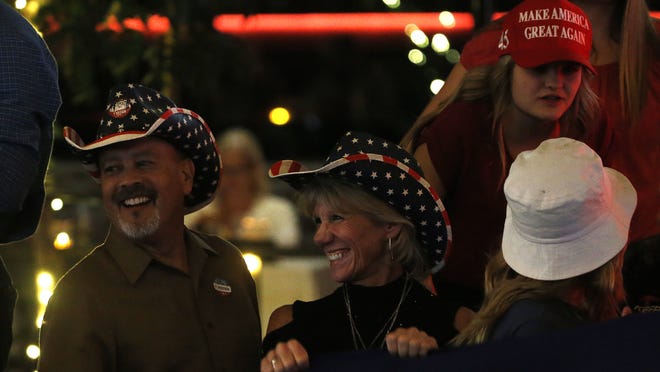 Polls had closed in most of the other battleground states that will ultimately determine the election, including Pennsylvania, Michigan, Florida and Wisconsin. But the country was still hours away — at best — from knowing the results in virtually all of those states.

After the polls closed, Biden spoke at a car rally in Wilmington, Delaware, about 10:40 p.m. Arizona time, telling the crowd to be patient and expressing confidence that his campaign would prevail.

He stressed the importance of counting all votes before declaring a winner.

“We’re gonna have to be patient until the hard work of tallying votes is finished, and it ain’t over till every vote is counted, every ballot is counted,” Biden said.

In remarks at the White House early Wednesday morning, Trump criticized the vote-counting process in several key swing states, making several false claims about how elections work. He declared victory, despite not having won. He said the election would end up in the U.S. Supreme Court.

Regarding Arizona, where he is currently trailing Biden by a significant margin, he said it was too soon to say he’d lost it. His remarks came shortly before the Associated Press called the race in Arizona.

“We have a lot of life in that,” Trump said.

He noted there were a lot of votes yet to count in Arizona and he shouldn’t yet be discounted here, a seeming contradiction to his comments about other swing states with large numbers of outstanding votes where he falsely claimed he had won.

It don’t matter if he wins Arizona, though, he added.

“We don’t need that. That was just a state that, if we would have gotten it, it would have been nice, Arizona,” Trump said.

Biden’s victory comes after a whirlwind of activity as both campaigns worked to capture residents’ votes.

For about two months leading up to Election Day, and especially in the final few weeks, Arizonans saw regular visits from the Trump campaign, including the president and Vice President Mike Pence multiple times. Biden and running mate Sen. Kamala Harris of California visited Arizona in person in October, and campaign surrogates, including Cher, held events here or online geared toward the state’s voters.

This is what it’s like to be a swing state, the next step in Arizona’s evolution to a purple state seen as in play for both parties at the highest level.

Polls repeatedly showed Arizona in play for Biden. The Trump campaign’s frequent visits, sometimes one every day or two in the final weeks before Election Day, suggested the president’s team understood the need to fight for Arizonans’ votes.

Voters turned out on golf carts, in caravans, at events and at the polls this year to support their preferred candidate. They showed up at rallies. They knocked doors, made phone calls, sent text messages. Airwaves filled with constant, expensive campaign ads.

Many shared that, while occasionally annoying, the fact that the presidential candidates spent so much time and money courting their votes made them feel like their votes really mattered.

“It kind of makes you feel a little bit more important, seeing them put money into your state and knowing that you’re not like a Republican in California or a Democrat in North Dakota, where your vote doesn’t matter,” Dalton Ries, a 29-year-old Gilbert resident and independent voter, said in October, as campaigns were constantly pinging his phone.

Trump’s campaign visits in Arizona sought to rally support with his base at times, and at other times sought to expand or solidify his standing with specific groups, including Latinos, veterans and members of The Church of Jesus Christ of Latter-day Saints. The campaign opened several Latinos for Trump community offices in the state, which served as headquarters for on-the-ground campaigning.

Some prominent Latter-day Saints broke with the Republican Party and sided with Biden, saying their faith didn’t align with the president’s rhetoric.

Some veterans saw Trump’s comments about people who have served as offensive and decided not to vote for him. Cindy McCain, the widow of the late U.S. Sen. John McCain, the Republican Party’s 2008 presidential nominee, notably endorsed Biden after longstanding animosity between the McCains and Trump. Trump had, more than once, denigrated McCain’s military service.

Both Trump and Biden counted prominent Arizonans as supporters and surrogates. During Trump’s visits to the state, U.S. Sen. Martha McSally and Gov. Doug Ducey often stood by his side. One of Biden’s key surrogates became Democratic U.S. Rep. Ruben Gallego.

Most expensive race in history

By the end of an emotionally draining and bitter contest, the two candidates had spent more money than any campaign in history and were expected to generate record turnout, with more than 100 million Americans casting ballots before any polling location opened on Election Day. Long lines formed at schools and government buildings, underscoring the significance of the choice for many voters.

“Winning is easy. Losing is never easy — not for me, it’s not,” Trump said during at his campaign headquarters Tuesday, adding he had not readied a victory or a concession speech. “Everybody should come together and I think success brings us together.”

Fundamental questions about the direction of the country and its democracy were at stake. Throughout the campaign, Trump cast the election as America’s last chance to avoid careening left. Biden ran a race that focused heavily on his character and the promise of avoiding another four years of chaos, division and Trump-style drama.

Biden started the day at church with his wife, Jill, and two granddaughters. He flew to his birthplace of Scranton, Pennsylvania, where he signed the living room wall in his childhood home.

“From this house to the White House with the grace of God,” he wrote.

Voters line up in Arizona

Across the state, voters lined up at polling places, socially distanced and wearing masks, to participate in the democratic process.

In a parking lot in Flagstaff, a car emblazoned with pro-Biden bumper stickers and painted “Every Vote Matters!” sat only a few spaces from a truck flying a “Thin Blue Line” flag. Eventually they both pulled away, their drivers returning from inside each wearing “I Voted!” stickers.

In the Tucson suburb of Casas Adobes, an enthusiastic group of nearly 20 Republican voters gathered in to show their support for Trump with a few hours remaining before polls close in Arizona.

In south Phoenix, volunteers with the United Farm Workers hosted a voter information booth, which one volunteer called a “lemonade stand for democracy,” to help voters figure out where and how to cast their ballots.

Some chose to vote in person on Tuesday because of fears about mail-in voting, a long-standing tradition in Arizona and the way that most voters cast their ballots in the state.

“I’m not going to send my mail, the ballot, for president of the United States. That is too severe and it’s too important. So I went to a polling place because I know that it’s more secure and it’s harder to be thrown out,” said Joseph Abeyta from Tucson.

Many sensed the importance of voting in Arizona, a battleground state that could be instrumental in deciding the White House.

Jose Batopis III, a 28-year-old enrolled member of the Yavapai-Apache Nation who also has Yaqui and Tohono O’odham heritage, said he had lost an uncle, great-uncle and his grandfather to COVID-19.

He voted for Biden and Harris, saying they will take the country in a better direction.

“The way the president has handled the pandemic has been a disaster,” Batopis said.

On both sides, people believed the election would be historic, one of the most consequential they had participated in so far.

Edward Wagner, 58, a Republican with his two young daughters in tow, waited more than an hour to vote for Trump and the GOP at all levels of office in “the biggest election of the century.”

“He is as tough as nails. Just look at how he recovered from COVID himself, holding four rallies a day. He’s worked really hard,” Wagner said.

He said he was driven to vote because he wanted to see racial justice and more education opportunities for young people.

“All my friends are voting. The way that it was so crucial, especially for the year 2020, just made everyone vote,” he said.

Some voters didn’t want to pick either Trump or Biden.

Randy Rogers voted for Trump in 2016, but said the president mishandled the pandemic. The infection had swept through his sister-in-law’s entire family.

“I was a Trump supporter last time because I liked what he had to say, and I’m definitely not a Democrat. Republicans want to take everything and Democrats want to give everything away.”

For the first time in his life, he’s casting his vote for the third-party candidate on the ballot, Jo Jorgensen.

“For me, I can’t vote for these two guys with a clear conscience,” he said.

The Arizona Republican Party gathered to watch results in a Chandler courtyard on Tuesday evening.

Marilyn Gregorin, a member of the Arizona Republican Party, said she volunteered with the Republican Women’s Party in Chandler because of Trump.

“I have supported him since he was first running in 2015,” Gregorin said.

At a separate watch party in Phoenix, people at a gathering for the Maricopa County Democratic Party cheered as initial county vote totals that dropped at 8 p.m. showed Democrats with sizeable leads in key races. Some shouted “Oh my god!” multiple times as they scrolled down the Maricopa County Recorder Office’s website.

Maricopa County Democratic Chair Steven Slugocki said the state’s most populous county would transform the state from the Republican stronghold it once was.

“Tonight, we made history in Maricopa County by turning this county blue,” Slugocki said. “Maricopa County is going to lead the way to Arizona turning blue. We are no longer a red state in Arizona.”

USA TODAY contributed to this article.