After a few days of total sunshine, North Georgia will add some clouds into the mix Thursday.

More cloud cover will not mean rain, according to Channel 2 Action News meteorologist Brian Monahan. The region is likely to stay dry all the way through the work week and into the weekend, he said.

“It’s going to be a beautiful afternoon, we’ve just got to get past this cool start we’ve got here across North Georgia,” Monahan said.

While there are some 30s in the mountains, Monahan said most of North Georgia is starting out slightly warmer than in recent days. With temperatures in the upper 40s, metro Atlanta is still pretty chilly, but he said a heavy winter coat likely isn’t needed Thursday.

“It’s going to be a milder start out there this morning, and as we go through the afternoon, a nice warm finish,” Monahan said. “We’re up to about 70 degrees today.”

Friday will see another mild start, he said. Morning lows in the 50s are in the forecast, with a projected afternoon high of 72 degrees, according to Channel 2.

Monahan said dry air in place over the state is not going to allow much in the way of rain chances. Next week could be a different story, he said, as Tropical Storm Eta makes its way to South Florida.

“This potentially could bring us some rain by the middle and end of next week,” he said. “That will be our next chance of some showers and storms. Otherwise, we’re looking good over the next few days.” 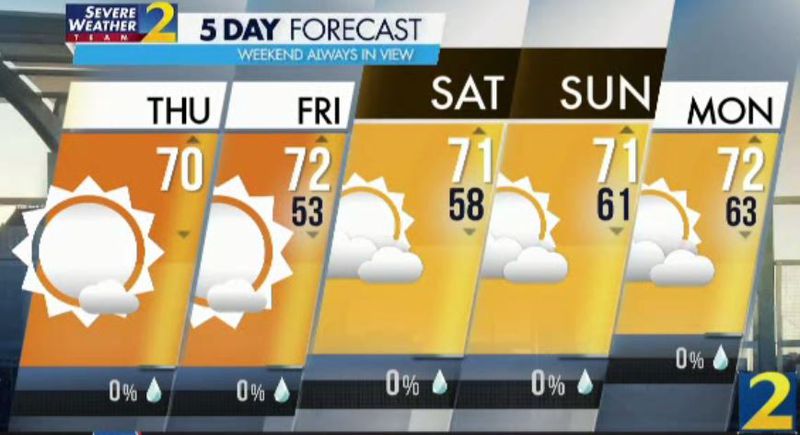 Without rain, Monahan said sunshine delays will be the only weather impact to travel Thursday. And there are no early crashes to slow down the morning commute, according to the WSB 24-hour Traffic Center.

Most metro Atlanta interstates are moving at the speed limit at 6 a.m., traffic reporter Mark Arum said. While volume is expected to build, there is no early crowding at the start of the commute, he said.