That’s because this election year — with a raging pandemic and a Republican president who’s railed for months against voting by mail — has introduced unpredictability in Arizonans’ voting patterns.

In typical years, the ballot-counting process is fairly predictable: Republicans vote heavily by early ballot and mail them in quickly, while Democrats vote later, dropping their early ballots at the polls or casting votes on Election Day.

But 2020 has turned much of that on its head, as Trump sowed doubt about the legitimacy of mail-in ballots and the coronavirus pandemic caused many voters — specifically many Democrats — to avoid large crowds at the polls on Election Day.

Democrats also feared the postal service could slow delivery of their early ballots and so the party and activists urged voters to quickly fill out and return their ballots. Republicans, meanwhile, tended to hold onto their ballots and either mailed them later or dropped them off just before Election Day. They also voted heavily at the polls.

This changed the way Arizona and the nation perceived results from the race between Trump and Biden.

At 8 p.m. on Election Day, Arizona counties dropped results that included most of the early ballots mailed in or dropped off before Election Day. The numbers showed Biden with a massive 200,000-vote lead that seemed insurmountable, especially given Biden’s edge in Maricopa County.

When Fox News called Arizona for Biden late that night, conservatives raged that the state had been called with votes still being counted.

Then the votes cast on Election Day, which strongly favored Republicans, started to appear in the tally.

Gov. Doug Ducey chimed in on Twitter: “It’s far too early to call the election in Arizona. Election Day votes are not fully reported, and we haven’t even started to count early ballots dropped off at the polls. In AZ, we protected Election Day. Let’s count the votes — all the votes — before making declarations.”

After the Associated Press called the race early Wednesday morning, and results showed the gap between the candidates narrow to 130,000 votes, the Republican governor weighed in again.

“Not so fast,” Ducey said on Twitter. “The race has narrowed in #AZ considerably. 130,000 votes separate the candidates, with hundreds of thousands of votes yet to be counted, from all over the state. I’ll say it again: Let’s count the votes, and let the people decide rather than making declarations.”

Biden’s lead continued to shrink on Wednesday as counties counted ballots that had been mailed in or dropped off just before Election Day and conservative strongholds such as Yavapai and Mohave counties reported more results. Biden’s lead was now just over 90,000. 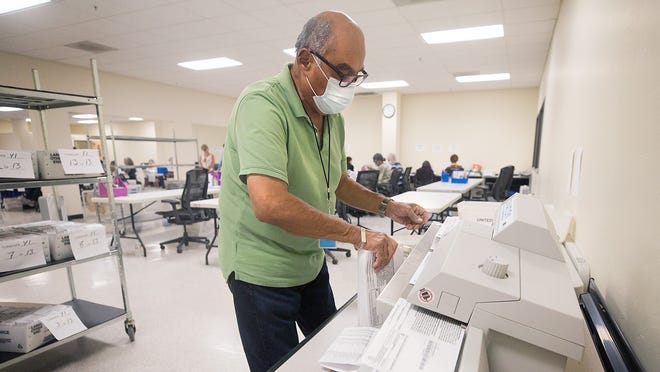 By Wednesday night, when Maricopa County released the vote tally from a large batch of ballots that arrived immediately before Election Day, Biden’s lead shrunk to 68,000 votes. Trump had pulled almost the exact 57% to 40% margin he needed to overtake his Democratic challenger in Arizona.

On Thursday, Biden’s lead continued to shrink, by 22,000 votes, leaving the gap separating him from Trump at about 46,000. But in Maricopa County, Trump fell slightly off the 57% share of the newly counted votes that he needed for victory in Arizona.

But another mystery about this year’s election in Arizona remained: For which party would mail-in ballots that had been dropped off at the polls break?

In the past, Election Day votes have trended Democratic. But perhaps because of Trump’s warnings to Republicans about mailing their ballots, they had a greater share of GOP votes.

The answer didn’t come until Friday morning, as Maricopa County released results from at least 30,000 such ballots. The truth was somewhere in the middle.

On Friday night, Trump won a batch of early votes released by Maricopa County 52.6% to 43%, but again was off the pace he needs to win.

Republican pollster Paul Bentz said Trump would need 60% of all remaining votes, something he hasn’t achieved in any batch of Maricopa ballots after Election Day.

Sam Almy, a Democratic political strategist who tracks early ballots, said he had never before seen early ballots trend Democratic for several weeks like they did this election. He attributed it to Democrats being more motivated to vote for Joe Biden and Mark Kelly than Republicans were for Trump and Martha McSally. Also, he said, the Democratic Party and its allied groups have been promoting voting by mail for years.

All of that work “came to light in this weird election where the base is really energized and nobody wants to really go to the polls because of the pandemic that is happening,” he said.

While early ballots dropped off at polling places have skewed more Republican this year, Almy said, it hasn’t been enough to bring Trump back. Almy said this group of Republicans were likely to have voted in several elections and were not going to miss casting a ballot but found it easier to just drop them off.

Republican pollster Chuck Coughlin said this year flipped the script on the partisan breakdown of the state’s usual ballot routine.

Democrats then typically catch up with “earlies” dropped off at the polls and votes cast on Election Day, he said.

Coughlin pointed to situations like 2018, when the count of early ballots released at 8 p.m. on Election night showed Martha McSally leading her Senate race, but Sen. Kyrsten Sinema surpassed her once early ballots dropped off at the polls were counted, along with provisional votes. A similar scenario played out in the races that elected Secretary of State Katie Hobbs and Superintendent Kathy Hoffman, both Democrats.

The same trend can be seen as far back as the vote to approve medical marijuana in 2010, when the measure trailed throughout early voting, before being carried across the finish line by provisional votes cast on Election Day in Maricopa County that were counted many days later.

Typically early voting gives Republicans such a big lead that Democrats cannot catch up. This year, Democrats instead got their voters to turn out early.

“That’s always been the rule,” Coughlin said. “This year turned it on its head. … Usually it is Democrats catching up late, not Republicans.”