By Matt Kempner – The Atlanta Journal-Constitution

Dave Raney, a Joe Biden supporter, has been friends for decades with a college buddy who is a Republican. Back in the era of Ronald Reagan, they used to have thoughtful conversations about their political differences.

But the 61-year-old Lilburn resident, who works at an education nonprofit, said he can’t bring himself to talk politics with his college friend this year. Raney views President Donald Trump as not only a bad leader but a bad person. If friends support Trump, maybe “that makes them someone I don’t know anymore, and I don’t want to go there.”

Down the same neighborhood street from Raney, but on the other side of the Trump-Biden divide, is Emil Powella, a 74-year-old retired marketing manager, ordained minister and conservative. Earlier this year he told his younger sister, a liberal, that he no longer wanted to discuss politics or COVID-19 with her or her husband in order to keep the family peace.

“I’m not sure it’s ever been as polarized emotionally” between Republicans and Democrats, said Powella, a neighborhood association president and Lilburn City Council member.

The presidential election confirmed a politically divided Georgia, with only the thinnest thread of votes separating Trump and Biden. In some ways it’s less of a purple state than two states, red and blue, that mix less and less, testing basic bonds like family, friendship and community. Some people would rather not talkabout politics so they don’t risk permanently rupturing relationships.

Georgia voters interviewed in recent days aren’t anticipating a quick end to the growing discomfort between people who thought they had more in common a few years ago. Instead of seeing reasoned political differences, some are, at best, befuddled by views held by the other side. At worst, they see them as ignorant or morally deficient. 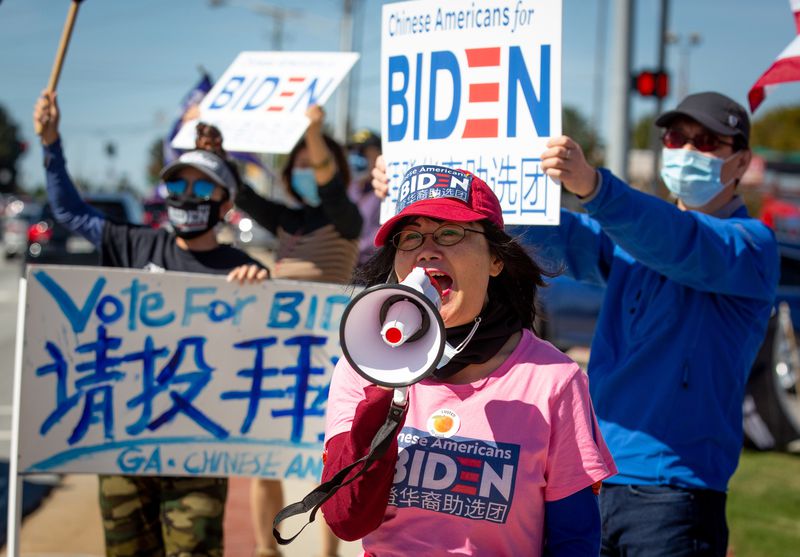 Many are still working hard to find common ground, or at least ignore differences, so that relationships aren’t tarnished.

“It is crazy and stupid to break up friendships over political disagreements,” said Erica Wallace, a Lawrenceville bookkeeper.

She voted for Biden and strongly dislikes Trump. “I’ve never felt this way about any other president” since immigrating from Jamaica in the 1990s, she said. She nannied for a Buckhead family for nearly a decade, before leaving the position seven years ago. She still visits with the parents, who are Republicans, but they avoid talk of politics.

On the other hand, her husband, a Democrat, got a call from “a very good friend” who is a Trump supporter. The conversation turned tense, she said. The two men haven’t spoken for at least a month since. “After this is over, maybe they will be back the way they were,” she said. “But maybe not as close.”

If it seems like the partisan divide in America has never been this bad, that’s because it probably hasn’t, at least not in the lifetime of anyone living, said University of Georgia political scientist Charles Bullock. He pointed to the growing number of Americans who question the validity of voting results when their side loses. “It seems to be getting worse with each election cycle.”

Today’s bitter partisanship is boosted by what people are exposed to, from cable TV news sources to personalized advertising on Google and Facebook, driven by algorithms, said Emory University historian Joseph Crespino. “We don’t look at the same sources of information.”

Communities also are much less politically diverse than they used to be, Crespino said. People are surrounded by others who think like them.

Some of the political animosity today isn’t centered on policy differences but rather on strong feelings about a single candidate, Trump.

“Never before in our history, with the possible exception of Andrew Jackson, has the personality of a presidential candidate become the main story as it has in 2020,” said Michael Bailey, a political scientist at Berry College in Rome.

Plenty of people have been shying away from political debates long before this fall’s presidential race.

Alan Majors, an IT consultant from Dacula and a Republican, said he resists being pulled into partisan discussions with co-workers and sometimes even around family members who think much the way he does. He’s also limiting his online exposure to forums, “because the stuff is so polarized. That stuff will rot your mind.” 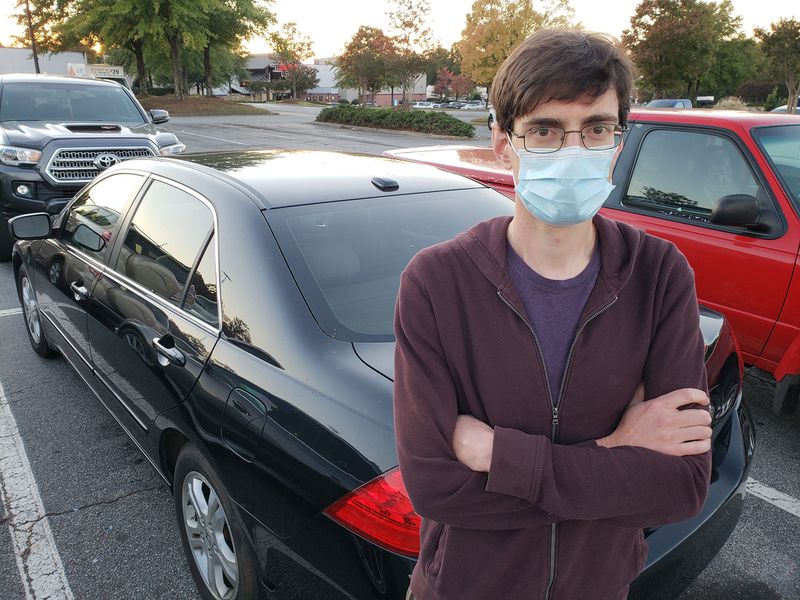 Jason Dimonda is stressed about the election and the potential for politically tied violence in the months ahead. But the 38-year-old Gwinnett County anesthetist keeps many of his worries and political beliefs to himself. He has avoided speaking up when his in-laws, who hold different views, talk politics. He’s not convinced they know he’s a Democrat.

Many Georgians are focusing on topics other than politics, at least publicly. As vote counts dragged on, Facebook was still awash with postings about birthdays and puppies, ailing relatives and cute kids, along with partisan worries.

But the topic is difficult to avoid.

Kanika Sloan Williams, a 44-year-old attorney, voted for Biden. She’s had heated discussions with family members, several of whom are current and former military, who chose Trump because they believe he will focus on law and order and stand up to dictators around the world.

“It’s baffling to me how Black men who know what the climate is like out there for Black men could support him,” said Sloan Williams, a Black resident in South Fulton, which voted heavily for Biden.

In Georgia, exit polls show Trump did better with voters who are male, white, rural, 60 or older, without college degrees, served in the military or white evangelicals and born-again Christians. Biden did better with women, Black people and Hispanics, metro Atlanta residents, young voters, college graduates and people who are gay, lesbian, bisexual or transgender, according to exit polls by Edison Research for the National Election Pool.

The upcoming holidays will be interesting, Sloan Williams said. The discussion will likely turn to politics before dessert. She hopes it will be cathartic rather than divide the family as it has the nation.

She also is navigating working with legal clients who supported Trump. “Clients obviously pay me and I obviously respect them, so it’s difficult that we’re so far apart in our beliefs.” She said her clients think Trump is good for business, but she thinks Trump is “racist, sexist, homophobic and honestly, just an outright liar.” The takeaway, in her view, is that money is more important than people for some voters.

You can’t get much accomplished locally unless you support or have a relationship with GOP officials, said Lotson, a former mayor pro tem in Darien and currently vice chairman of the Gullah Geechee Cultural Heritage Corridor Commission. “As a humanitarian, I just have to work my angles.”

Some Republican voters are frustrated by Democrats who they say have been bolstered by biased media outlets and have resorted to knee-jerk hatred of Trump, often taking his words out of context and not giving him credit for good policies.

Majors, the IT consultant, described it as reverting to thinking only “orange man bad.”

Powella, the Lilburn City Council member, volunteers that the president “can be an absolute jerk” but likens Democratic animosity to the equivalent of only quoting bumper stickers instead of understanding facts behind the issues. One big concern for him: that Democrats more liberal than Biden will usher in extreme policies that will damage the nation. 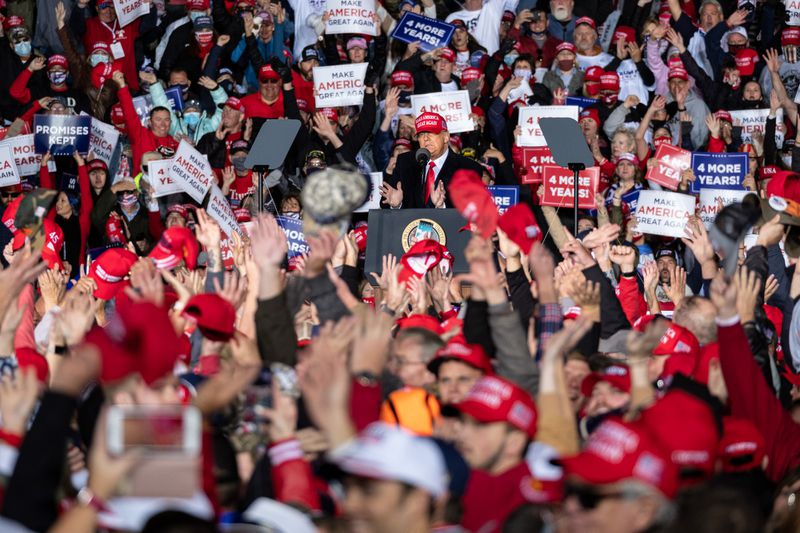 Demont Roddy expects the hyper-polarized nature of the election this year will inevitably leave some Georgians very angry.

The 34-year-old former U.S. Marine who served three combat tours hadn’t voted in many years. But Roddy, a machine operator and trainer in Leesburg in southwest Georgia, cast a ballot for the candidate he thinks will best support the military: Trump.

Regardless of who wins, he predicted Georgia and the nation will move forward. “No matter how much we fight like cats and dogs, we always take care of our own.”

Roddy said there are more people “with common sense than people with anger and rage.” After the results are in, “it’s still going to be America. The law still stands. The Constitution is still strong.” 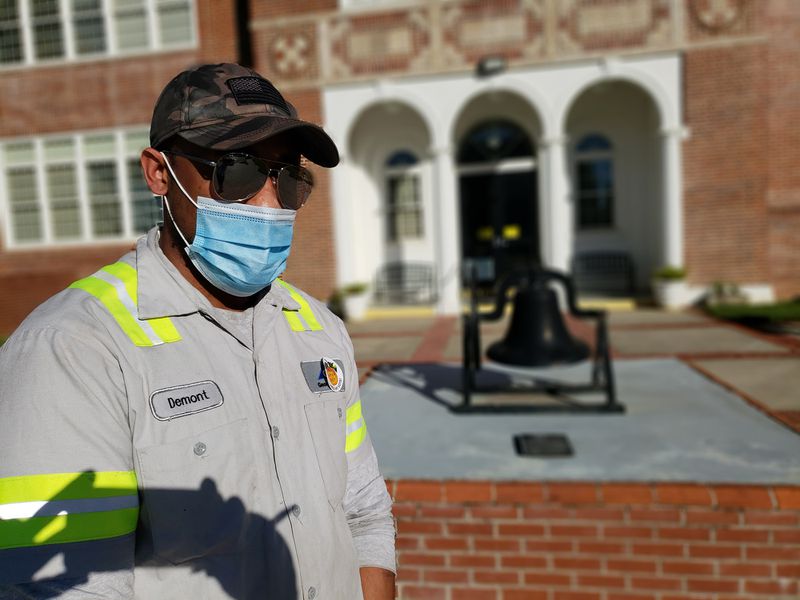 Not everything will be the same, though, said Shayr Guthrie, a 51-year-old voice-over actress from Atlanta’s Virginia-Highland.

In the last few months, two friends unfriended her on Facebook after she said she posted nice, fact-based items on Facebook — one related to COVID-19 and the other tied to Black Lives Matter. She said she has been stunned by how differently people can view some issues.

For, Guthrie, a Democrat, the presidential campaign boiled down to morals and values tied to a president she said is “not a good person.”

“I definitely look at people differently” if they voted for Trump, she said. “If we don’t have the same morals and values I will still be friends. I will still be kind. But I do find myself phasing people out. I’m keeping them at arm’s length.”

The presidential race also revolved around values for Chase Rylee, a 31-year-old accountant and a part-time pastor at a church in north Georgia’s Banks County. A conservative, Rylee said while he dislikes how the president has lashed out at people, he favored Trump because of his support for limits on abortion and other measures he said back biblical values.

When he preaches, Rylee said, he has stressed that “I have to be kind and love people regardless of their political affiliations or any other category we may try to put people in.”

“Jesus doesn’t vote Republican or Democrat. He is not affiliated with a political party,” he said.

The way forward is to listen to people, even those you don’t agree with, Rylee said. Still, he is concerned that even if divisiveness eases after the election, the calm will be only at the surface. “It probably won’t take much to blow it up again. It won’t take much for a spark to light the fire.” 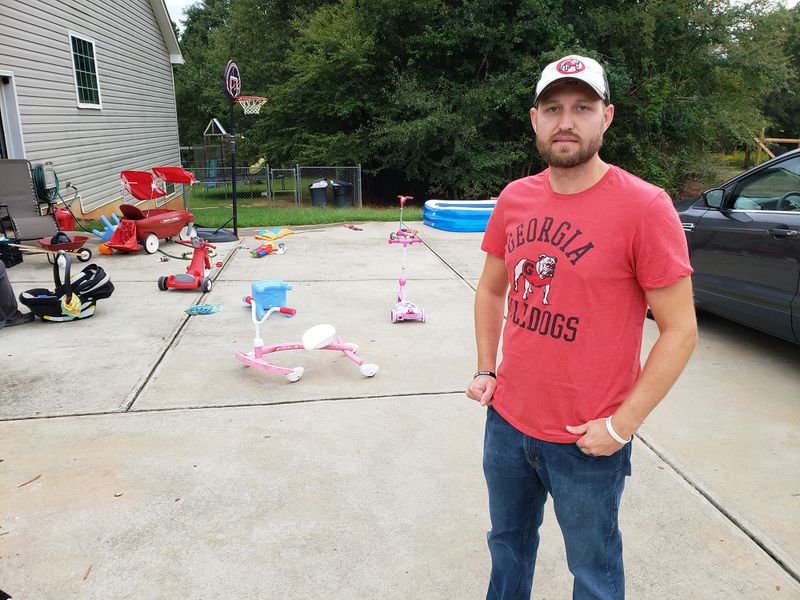 In Lilburn, Powella the conservative said friendships and family are more important than political talk. On social media, he took everybody out of his news feed who posted political items, even if he agreed with them. Among those that got the social media hook: a niece who is farther to the right.

“It was as much for my own personal peace to not be exposed to that jazz all day, every day,” he said.

Powella played on the same neighborhood tennis team in years past as Raney, the Democrat who lives on the same street. While Powella has discussed politics with some in the neighborhood, he and Raney haven’t in any depth. They aren’t close friends, but they speak well of one another.

Raney said avoiding difficult political discussions, as he and others are doing, won’t solve the issue or end deep policy divides. “They are not going to go away.”

But he also cited a quote that Abraham Lincoln reportedly attributed to William Seward, his secretary of state during the Civil War, that “there was always just enough virtue in this republic to save it; sometimes none to spare….”