U.S. Sen. David Perdue was forced into a January runoff against Democrat Jon Ossoff, making Georgia the home to twin 2021 showdowns that could determine control of the U.S. Senate.

The first-term Republican fell under the 50% mark required to win the November contest outright as counts of absentee ballots helped Ossoff’s vote totals climb. The Associated Press projected the race would require a runoff late Friday, though both campaigns expected overtime as votes were tallied earlier in the week.

The other U.S. Senate race, a chaotic special election with 20 candidates on the same ballot, was long destined to end in a Jan. 5 runoff. But Republicans desperately hoped to avoid overtime in the Perdue contest, and Senate Majority Leader Mitch McConnell’s super PAC barraged the state with ads backing the incumbent.

Ossoff and Perdue both worked furiously to avoid overtime, urging their base supporters to turn out in droves on Election Day. But neither could cross the majority-vote threshold required by Georgia law to win the statewide contest, as Libertarian Shane Hazel attracted a sliver of the vote.

Both parties failed to win a majority in the Senate. Democrats could gain control of the Senate under a Biden presidency if they capture both Republican-held seats. That’s no easy feat: Republicans have won every statewide runoff in Georgia history, dating to Paul Coverdell’s upset Senate victory in 1992.

But Democrats hope to marshal the same groundswell of energy that helped bring Biden to the brink of capturing Georgia’s 16 electoral votes. He has a narrow lead over President Donald Trump in Georgia and is poised to be the first Democrat to carry the state since 1992.

The rival campaigns quickly drew battle lines. Shortly after Joe Biden was declared winner of the presidential race by capturing Pennsylvania, Loeffler took to Twitter to declare she and Perdue were the “last line of defense against the radical left.”

Democrats, meanwhile, continued a focus on healthcare by accusing Republicans of a botched response to the still-raging coronavirus pandemic. At a Friday rally, Ossoff said Perdue “cannot defend misleading us so profoundly about a threat to our health and prosperity.”

Ossoff forced the runoff in nail-biting fashion. Perdue built a significant cushion in rural and exurban parts of the state, but Ossoff’s strength in the suburbs cut into the margins. As absentee ballots from Democratic-leaning areas continued to be counted, Ossoff steadily brought Perdue under the 50% threshold.

Though Perdue long warned that Georgia’s tight midterm election in 2018 was a “wake-up call,” the incumbent was the early favorite to win a second term in office. He had a hefty campaign account, a formidable political network and popularity so strong among Republicans that he didn’t draw a primary challenger.

But Ossoff, an investigative journalist, proved a formidable opponent. Three years after he narrowly lost a nationally watched runoff in a U.S. House race, Ossoff revived his fundraising machine and scored an outright win in a crowded Democratic primary by focusing his attacks squarely on Perdue.

The general election campaign quickly took on familiar contours. Ossoff branded the Republican an agent of a “corrupt” status quo who put his loyalty to President Donald Trump over the best interests of Georgians. Perdue, a 70-year-old former corporate executive, labeled Ossoff an inexperienced usurper who would lead Georgia toward “socialism.”

As polls showed the race tightening, the two lobbed increasingly sharp attacks at each other. Perdue suggested Ossoff is in league with terrorists and falsely claimed he was endorsed by Communists. Ossoff called Perdue a “straight-up corruption”artist who abused his power.

The back-and-forth reached a crescendo at a second — and what turned out to be final — debate last week.

Perdue criticized Ossoff’s firm for selling a documentary to a Hong Kong-based company with ties to China, while the Democrat hammered the incumbent for not taking more steps to contain the coronavirus pandemic. In a moment that went viral, Ossoff turned toward the incumbent and called him a “crook.”

It epitomized the clash in the debate. Ossoff has maintained since entering the race that Washington is profoundly corrupt and that Perdue and other Republicans prioritize donors who cut large campaign checks over the voters who put them in office.

Perdue and his allies have parsed Ossoff’s every statement to depict him as a left-wing radical, in particular seizing on comments the Democrat made over the summer linking federal law enforcement funding to performance metrics as evidence he wants to defund the police. Ossoff flatly denies that.

Unlike past Georgia statewide races, both campaigns eagerly sought to nationalize the race. Perdue emphasized his role as one of Trump’s closest allies on Capitol Hill and his history of counseling the president on issues such as immigration and trade. 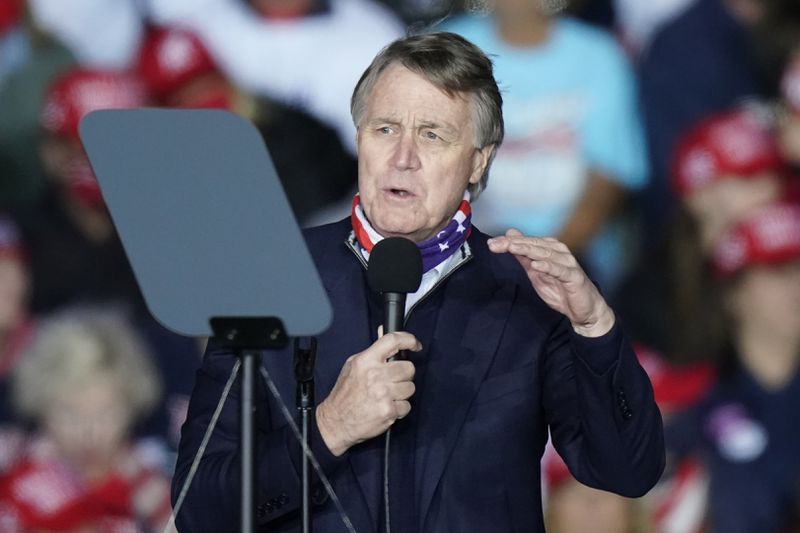 And the two appeared together last Sunday at Trump’s rally in Rome, where the president declared Perdue was “respected like you would not believe all over Washington” and urged voters to defeat his “nothing” opponent.

Ossoff, who in 2017 rigorously avoided ties to polarizing national Democrats, embraced Biden and other party figures in this race. At an election-eve rally, former President Barack Obama gushed over Ossoff and derided Perdue as “chicken” for pulling out of a third scheduled debate.

All told, roughly $150 million was spent on the airwaves in the Perdue-Ossoff matchup. Still, many voters expressed confusion over the twin contests, since the other involved 20 candidates clogging the same special election ballot for Loeffler’s seat.

Perdue played an above-the-fray role in that race, abstaining from endorsing either Loeffler or fellow Republican U.S. Rep. Doug Collins. But the bitter GOP infighting in that race also meant Perdue had to campaign solo, while Ossoff and Warnock rallied together in the closing days of the race.

Both campaigns expressed confidence about the next grueling nine-week phase.

“If overtime is required when all of the votes have been counted, we’re ready, and we will win,” Perdue campaign manager Ben Fry said.

Ossoff’s campaign manager Ellen Foster said Georgians “are going to send Jon to the Senate to defend their health care and put the interests of working families and small businesses ahead of corporate lobbyists.”