The presidential race is over, but in Georgia the campaigning is just beginning for twin runoffs that will almost certainly decide the fate of the U.S. Senate.

The consequential Jan. 5 showdowns will test anew the suddenly-swing status of Georgia, which is on the cusp of delivering its 16 electoral votes to Joe Biden. And the opening moves for the seats held by Republican Sens. Kelly Loeffler and David Perdue set the tone for a frenzied race to the finish in 2021.

Both Democratic contenders — Jon Ossoff and Raphael Warnock — have already aired ads previewing their opening arguments. Outside groups have started flooding the state with millions in spending. And major political players are ready to pitch Georgians on why the race matters.

Case in point: Former presidential contender Andrew Yang sent word over the weekend that he’s moving to Georgia for the home stretch — and he’s asking his supporters to follow him.

As Georgia’s attention was still focused on the presidential race, the quartet of campaigns began to sketch out the contours of the 2021 contest.

Democrats served notice that they will continue the same line of attack that helped Biden triumph over President Donald Trump nationally, with an insistent charge that Republicans botched the response to the pandemic, refuse to expand health care access and are concerned more about loyalty to Trump than common good.

“I’m a preacher,” Warnock, the 51-year-old Black pastor of Atlanta’s Ebenezer Baptist Church, said in an interview. “I’m gonna I’m gonna spread my message of of health care and hope, and the ways in which we really need to stand together in this dark time.” 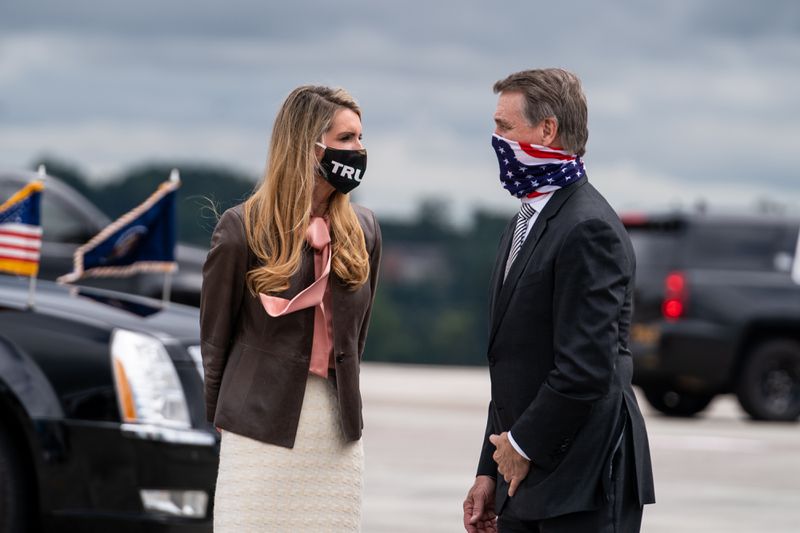 And Republicans will lean into the same argument that’s helped them dominate every statewide election since 2006: An argument that Democrats are too extreme for Georgia and that outside groups want to pull the state into more liberal territory.

Senate Democratic leader Chuck Schumer inadvertently played into that argument when, in a moment of unscripted joy shortly after Biden was declared the winner, he told a crowd of cheering supporters, “Now we take Georgia, then we change the world!”

Within hours, the two Republicans amplified that message with a warning that Georgia is “now the last line of defense against socialism.” And the National Republican Senatorial Committee quickly turned the remarks into an ominous ad urging supporters to “fight back.”

It’s only going to sharpen. Howard Franklin, a veteran Democratic strategist, urged Georgians to hunker down and get ready for the onslaught of attention that comes with being a “bona fide battleground.”

“Georgians have already endured a seemingly endless barrage of TV and digital ads, direct mail and text messages,” he said of the $200 million worth of Senate ads blitzing the airwaves through Election Day. He added that “paid political outreach is set to resume at an even greater clip.”

The stakes are high. The Senate is locked in a 48-48 tie, according to election projections by The Associated Press. Republicans are leading in races for seats in Alaska and North Carolina where ballots are still being counted.

If that holds, whichever party wins Georgia’s two seats gains control of the chamber — and the immense power that comes with it.

Without a Democratic Senate, Biden could be relegated to governing by executive orders and declarations, much the same way Trump has done since Democrats won control of the House in 2018. Republicans could have veto power over Biden’s Cabinet appointments and block his legislative agenda.

With a Democratic House and a Democratic Senate, a Biden administration could hope to pass more progressive legislation on a range of priorities, starting with a pledge to expand voting rights legislation but also including a public option for health insurance, new climate change restrictions and a criminal justice overhaul. 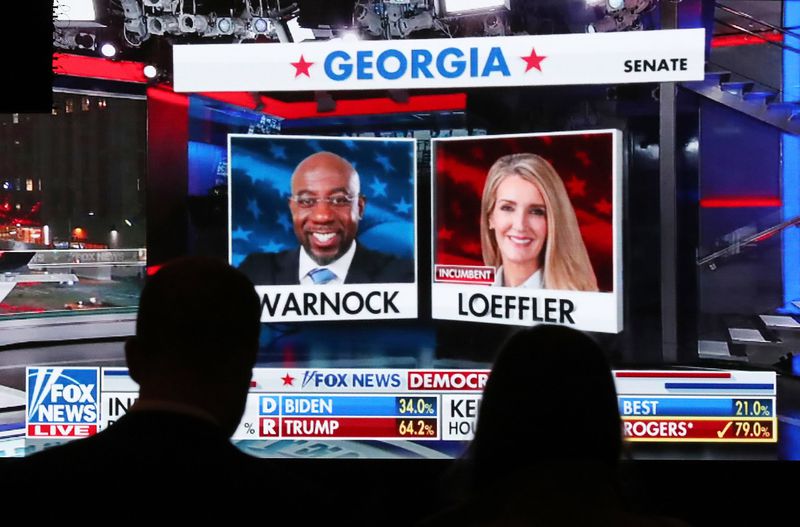 But for every measure that Democrats call “progressive,” Republicans answer with warnings of a radical socialist agenda, especially if the Georgia Senate seats flip to Democratic control.

On Saturday, Sen. Marco Rubio called Georgia “the firewall against the radical agenda of the far left,” while former first lady Michelle Obama urged her social media followers to “vote in even greater numbers in the upcoming Senate runoffs in Georgia.”

Though the four candidates emerged from two drastically different races — one a divisive wide-open special election, the other a conventional matchup — they’re now irrevocably tied to each other. A gaffe by Perdue could hurt Loeffler. An attack on Warnock could splash Ossoff.

And just as Republicans have already seized on Schumer’s comments, Democrats are likely to tie the GOP candidates to far-right politicians in Georgia, including U.S. Rep.-elect Marjorie Taylor Greene, who led a rally at the Georgia Capitol on Saturday falsely claiming the election was “stolen.” 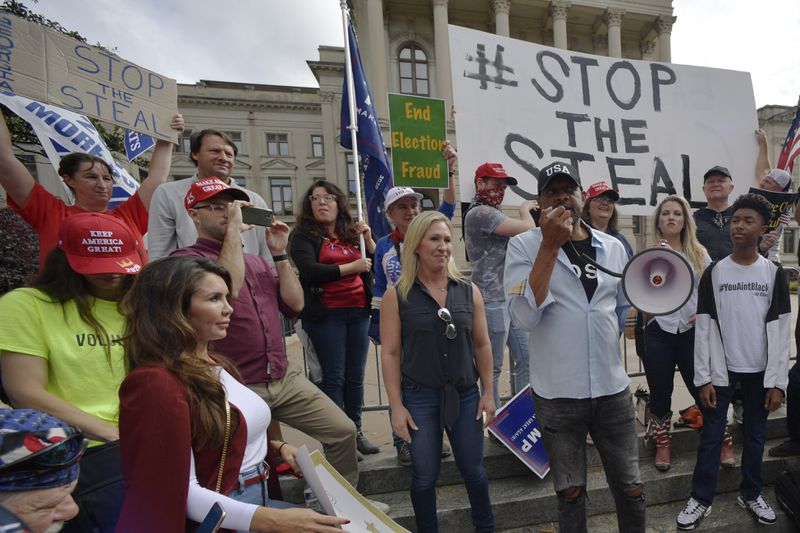 Both parties have little margin for error. Republicans have won every statewide runoff in Georgia, dating back to 1992, in large part because an older and less diverse electorate tends to vote in lower-turnout affairs. But with Senate control on the line, motivating voters from both parties won’t be nearly as difficult.

Democratic strategists hope the combination of Warnock, a religious progressive and first-time candidate, and Ossoff, a 33-year-old Jewish investigative journalist, will bring out a more diverse and younger electorate than typically vote in overtime races.

Republicans, on the other hand, are banking on their candidates’ business backgrounds and conservative Christian credentials to turn out the GOP base voters. Loeffler is a multimillionaire financial services executive while Perdue was CEO of Reebok and Dollar General.

Crucially, Republican leaders are also hoping Gov. Brian Kemp’s decision to appoint Loeffler to the spot in 2019 will pay off by attracting female voters in Atlanta’s fast-changing suburbs.

In particular, Democrats hope to block their opponents from trying to make a broader appeal by bringing up Loeffler’s frequent condemnation of the Black Lives Matter movement and Perdue’sintentional bungling of Vice President-elect Kamala Harris’ name.

‘All eyes’ on Georgia

If Georgians felt under assault by all of the television ads, direct mail and robocalls they received leading up to Election Day, the next eight weeks are poised to get even more intense.

As ballots were still being tallied, several outside groups announced they would spend millions of dollars in Georgia, including the conservative Heritage Action network and the anti-Trump Lincoln Project.

Stacey Abrams’ Fair Fight voting rights group raised more than $3.6 million to promote Ossoff and Warnock in the two days since she posted an online video seeking donors. Loeffler, a former financial executive, and her husband have already spent more than $31 million of their own cash on her campaign — and could plow in millions more.

Eric Tanenblatt said it’s only a taste of what’s to come. He ran U.S. Sen. Paul Coverdell’s runoff election in 1992 in the weeks after former President Bill Clinton carried the state and won the White House. 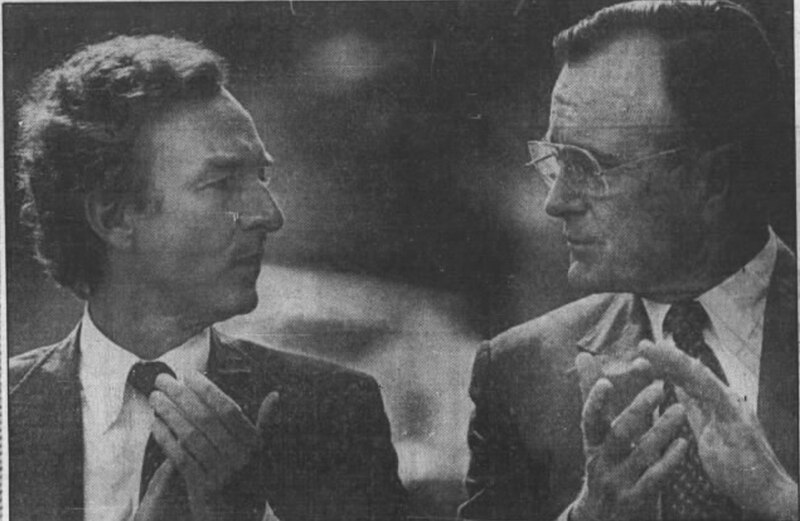 Like this year’s Georgia runoffs, the Coverdell race was transformed overnight into a referendum on a new president — and the result was a crush of political attention, volunteers, and, of course, cash.

“We would send staffers to the Post Office with black garbage bags to get all of the checks that people were mailing to the campaign’s Post Office box,” he said. “We could not open the envelopes fast enough.”

High-level surrogates came in to drum up support, including first lady Barbara Bush for the Republicans and President-elect Clinton for the Democrats, complete with his saxophone for an event in Macon.

So many Republican volunteers flooded into the state that the Coverdell campaign booked them into motels around Georgia and told them to stand by for marching orders. National reporters moved to Georgia for weeks.

“I’ve already had people calling me,” Tanenblatt said. “All eyes are going to be on Georgia.”