COLQUITT — Resting in a wheelchair with an oxygen tank trailing behind her, Miller County Hospital patient Glenda Bailey is flanked by two therapists on the 66th day of her fight against COVID-19.

“I got these two lovely ladies right here helping me with physical therapy and occupational,” she said, behind a surgical mask, “this is my PT, and this is my OT.”

Bailey is receiving the rehabilitation she needs to recover from the virus close to home. About a decade ago, though, it looked unlikely that the hospital providing that care would survive. 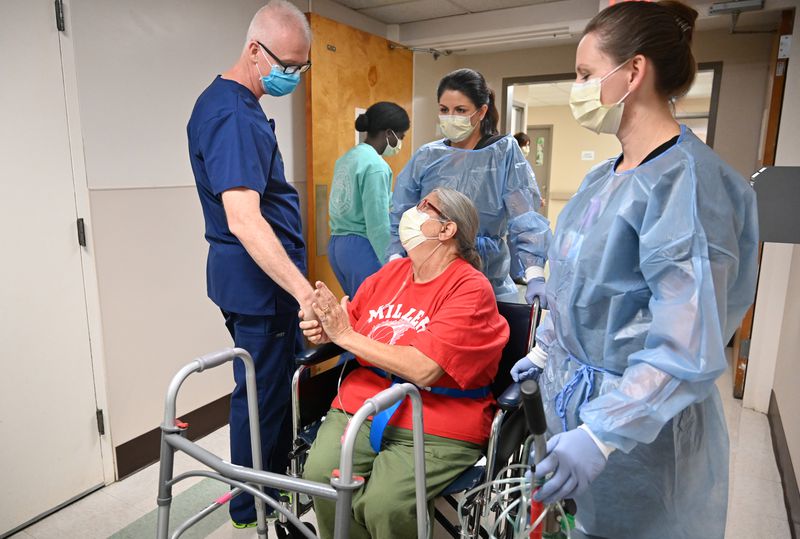 Back then, years of multi-million-dollar losses put the hospital at risk of closing. Its resources were so strained it had to borrow money just to buy toilet paper and aspirin.

Now, it’s a struggle to find a spot in the parking lot on Cuthbert Street.

This year, as other rural Georgia hospitals fight to survive, revenues of the Miller County Hospital Authority topped $66 million. Only recently, its neighbor in Randolph County, Southwest Georgia Regional Medical Center, closed after decades of serving its similar-sized population.

To stay alive, Miller County Hospital embraced innovations that often appear counterintuitive of its longstanding mission to serve its community. Industry officials say its strategies can serve as a guide for how rural hospitals can become financially sustainable.

One example: Hospital officials recognized that a growing number of patients were being released from ICUs at large health systems before they could be safely weaned from ventilators, so CEO Robin Rau started a ventilator program that today provides care for 100 patients from around Georgia and nearby states. Last year, one-third of those patients were able to come off the machines and breathe on their own, officials said.

That program and others have bolstered the hospital’s finances, helping to save jobs and ensure the healthcare facilities will be around to serve a community where 20 percent of residents live below the poverty line and median household income is $27,335 — less than half the state’s $58,756.

While some other rural Georgia hospitals see few patients, in September more than 130 procedures were performed in the Miller County operating facilities, including gall bladder removals, hernia repair, bronchoscopies, and colonoscopies. 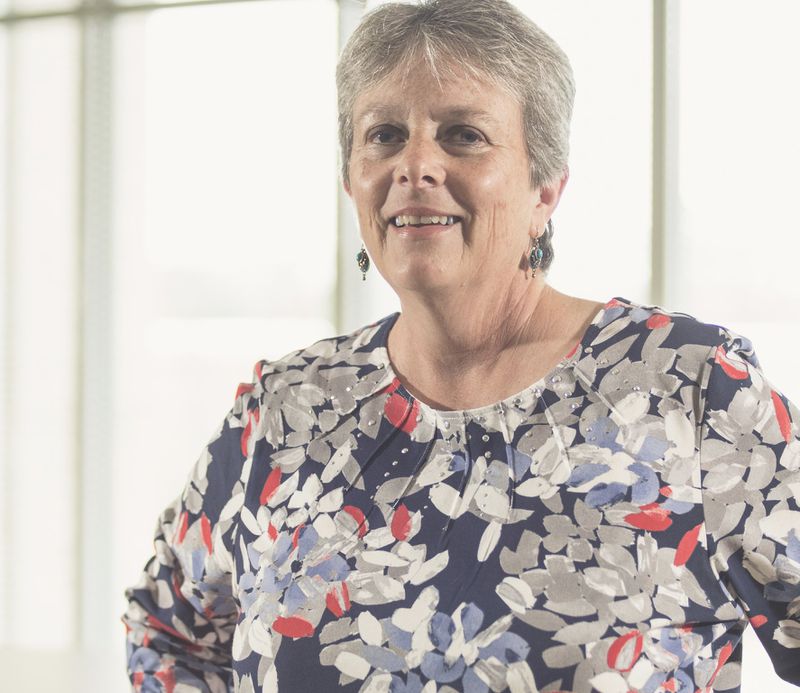 Its emergency department was seeing as many as 500 people a month before the pandemic. That was cut in half in the middle of the crisis; however, visits are now climbing back up. Roughly 350 patients were reported in September.

The hospital’s average daily census showed occupancy at 84 percent in 2018-2019, according to data from the Centers for Medicare and Medicaid Services, provided to the Atlanta Journal-Constitution by Cost Report Data Resources.

“That little hospital in the middle of nothing?” CEO Robin Rau said. “Yeah, we continue to provide quality healthcare to the community. That’s absolutely correct.”

Similar strategies have, almost by default, helped to fill the Colquitt facility and strengthen other parts of the county healthcare system, which includes standalone health clinics, a retail pharmacy, two skilled nursing facilities and nursing home.

Dozens flocked to the hospital this month for “mammos and muffins,” an event to support breast health.

Hundreds of people in southwest Georgia have access to the Miller network’s telehealth services. They receive them through the Miller Mobile, a large charter bus painted a bright turquoise and housing a waiting room, two exam rooms and a phlebotomy station. 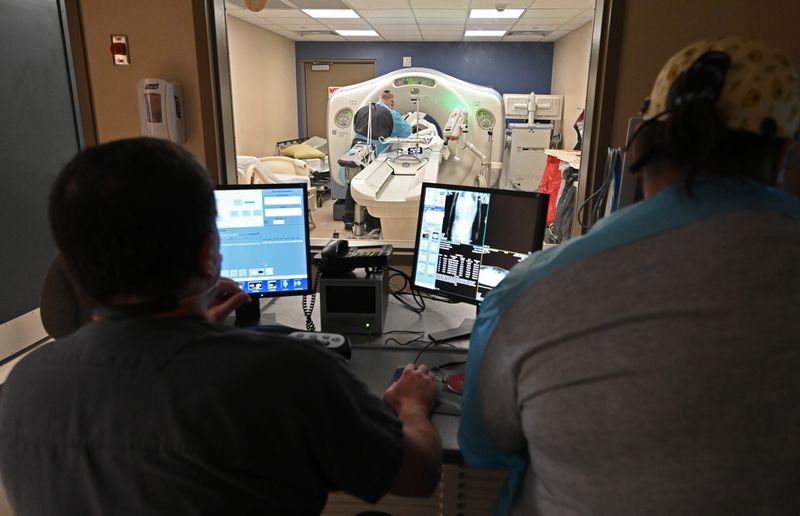 The operation is staffed by a nurse, an assistant and a driver, who are among the 700 people who work at one of the system’s facilities.

Among the physicians serving patients is Dr. Ugo Ireh, who provides wound care. Ireh, who has homes in Decatur and Colquitt, believes it is important to help the underserved.

“There is a need here,” the physician told The Atlanta Journal-Constitution during a visit to the hospital in late October, before he popped into a patient’s room.

About 10 minutes later, Bailey appeared in another hallway with her therapists.

Months ago, when her COVID-19 infection became life-threatening, Bailey had been transferred to a larger hospital. After she was able to breathe on her own, she was brought back to Miller County.

She finds her closeness to home some consolation after she lost her sister to the virus on Sept. 28.

“It’s hard, but I am handling it the best that I can, the way she would want me to.” 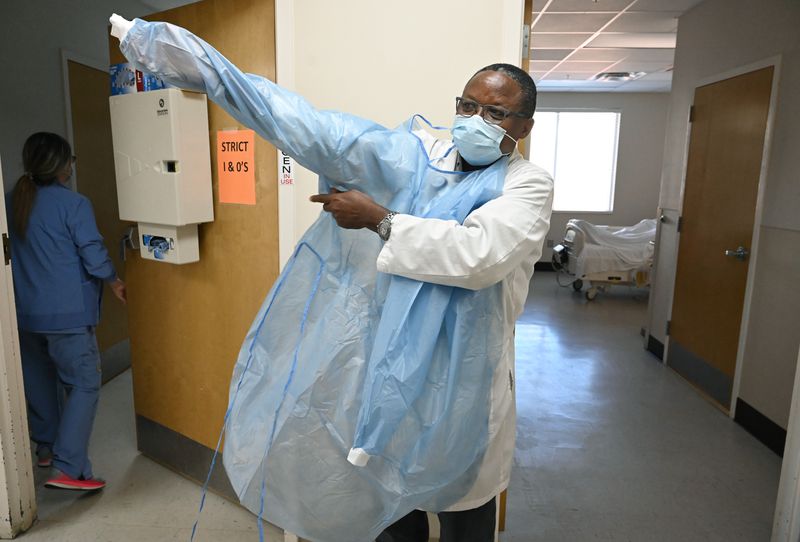 When Rau arrived in Miller County in 2008, she encountered a community that lacked confidence in the hospital.

Many saw the hometown facility as vital, but only in the case of a patient with a life-threatening emergency. If a patient had to be stabilized during a heart attack or a seizure, they landed in Rau’s emergency room.

Residents hopped to larger facilities to see physicians and seek treatment for chronic diseases, like heart failure and diabetes. They would receive hip replacements at a larger hospital, then come home to Colquitt.

“It was OK for the people who are dying but it wasn’t good enough for me,” was the popular attitude. 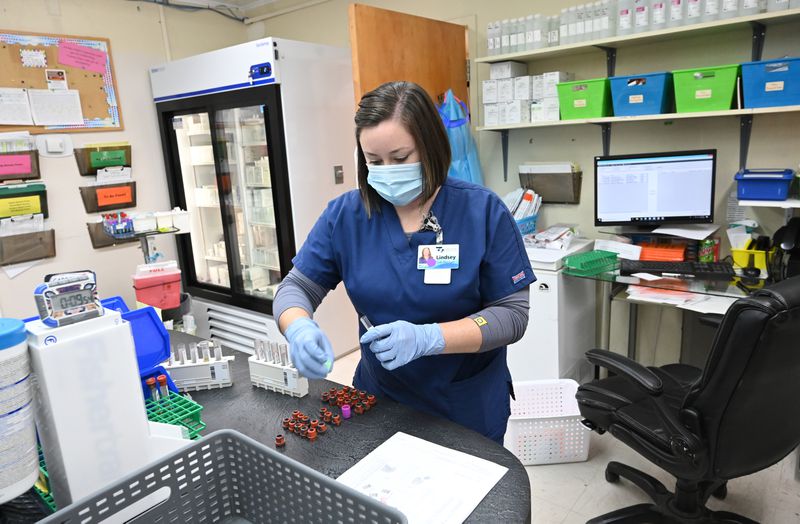 It took a while to change those attitudes and to stop the financial bleeding in a county where as many as 1 in every 6 residents is uninsured, while the county ranks almost at the bottom in the state on health outcomes such as teen births, adult smoking and obesity, according to the University of Wisconsin Population Health Institute.

Many hospitals that care for at-risk populations often see a drain on their resources related to overuse of the emergency room. An early strategy in Miller County was to re-route some of those patients to a clinic, a move that would save money while boosting community trust.

So the system offered free healthcare visits at a clinic. There, patients were sent home with medications to control chronic illnesses, like diabetes and hypertension. That helped to prevent the patients from having an acute episode that would require emergency care.

“It was cheaper for me to give them free clinic visits and give them their high-blood pressure medication than it was for me to treat them in the ER,” Rau said.

The Miller Mobile is expected to play a similar role. 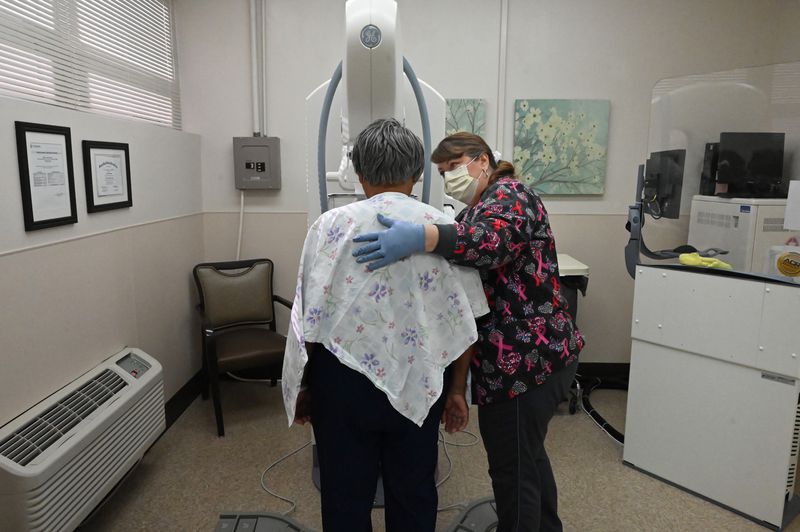 Simultaneously, case management workers met with patients who presented in the ER, digging deep into their clinical histories, as well as their living conditions and barriers to accessing healthcare. Social workers and others “held their hand” and walked them through the healthcare system, helping set up doctor appointments and calling up church members and volunteers to provide transportation, said Shawn Whittaker, chief nursing officer.

“What we saw happening in our ER is we saw that the acuity of patients go up and the super users were staying out,” Whittaker said. “Meanwhile, the revenue practically stayed the same, but we weren’t losing as much money.

“And our emergency room was seeing those patients who needed to be there.”

Many of strategies that have worked in Miller County have been adopted in some other rural communities with at-risk populations.

At Neshoba County General Hospital in Mississippi, wellness visits for patients who take part in a federal incentive program have identified cancers and diverted acute stages of disease. Sponsored by the Centers for Medicaid and Medicare Services, the program has saved the federal government millions and improved healthcare for thousands, CEO Lee McCall said.

If a patient comes in to receive preventative care, a provider will recommend a mammogram or a colonoscopy based on age and risk factors. “That captures revenue for the hospital to provide services to patients that they otherwise wouldn’t have gotten,” he said. 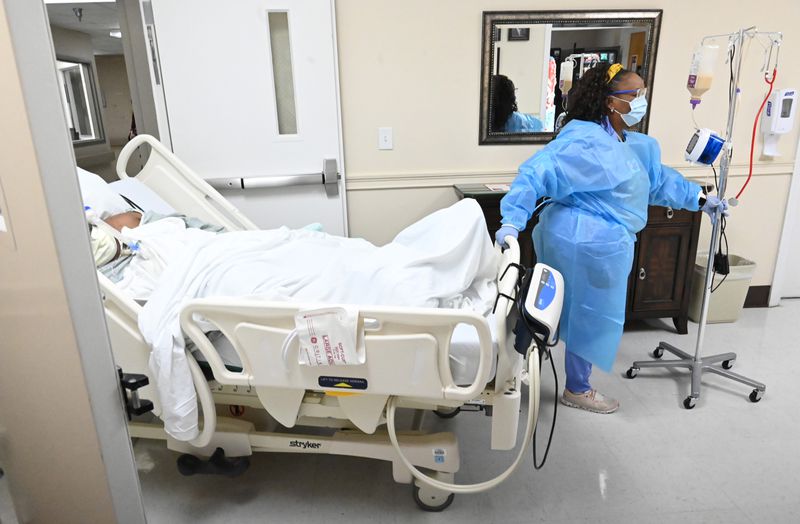 Rural healthcare leaders won’t succeed if they don’t change the way they have done business and seek to carve out a place for themselves, said Dr. Doug Patten, former chief medical officer for the Georgia Hospital Association and an associate dean at the southwest campus of the Medical College of Georgia at Augusta University.

“What Robin has done down there is she bent the model,” he said. “She didn’t have to break it, so she bent it to create room for some of these other service lines that small rural hospitals often don’t think about.”

Other industry officials predict her strategies will ultimately help bring many rural hospitals out of the red.

“Make no mistake,” said Jimmy Lewis, chief executive officer of HomeTown Health, an advocacy group for rural providers in Georgia. “What she has done will serve as boilerplate for the national transition of healthcare in rural America.”

Another challenge Rau faced when she took over was a substandard hospital building that was buried in debt — a situation still plaguing a number of other rural Georgia hospitals.

Within weeks of her arrival in 2008, a $3 million note due came across her desk from an investor who had lost much of his wealth in the global financial crisis. “He wanted us to to pay him back in 60 days,” she said. “Between laughing and crying, I thought, ‘Are you nuts?’”

Over the next six months, she obtained a loan for roughly $7.4 million, using a portion to repay the investor. 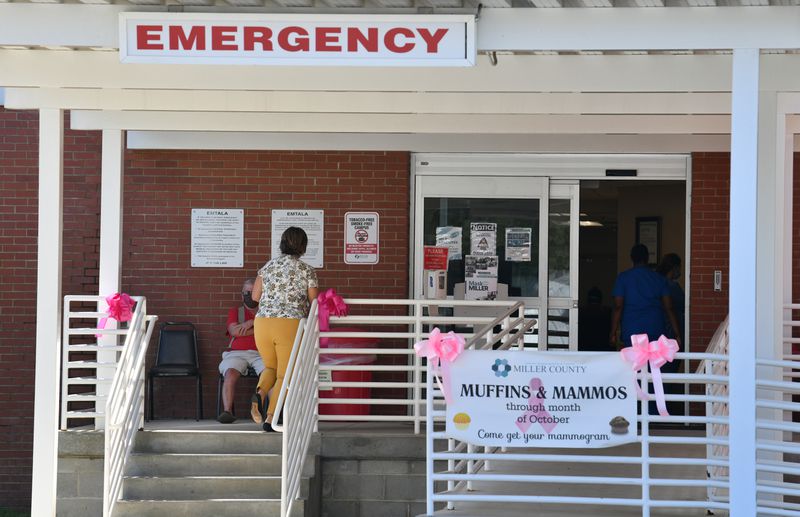 She plowed the rest into electrical and plumbing upgrades so that the hospital, built more than a half-century ago, could handle the technology to carry out CT scans, MRIs and other health screenings.

“Can you imagine the demand for power around here, and we were still working with fuses?” Rau said.

Since then, she has expanded the ER and replaced large portions of the building. Today, the hospital and its other health facilities are modest with no frills, but dramatically different than the crumbling hospital structures in neighboring Early and Randolph counties.

“Make no mistake. What [Miller County Hospital Authority CEO Robin Rau] has done will serve as boilerplate for the national transition of healthcare in rural America.”

Rau was also under the gun when she arrived to show she could make the operation work. That’s how the ventilator program came about.

By late 2008, the hospital was accepting local patients who required tracheostomies to manage their breathing. That prompted Rau to expand services to a handful of patients dependent on a ventilator.

Once word got around, officials with the state Department of Community Health asked the hospital to pilot a program for long-term ventilator patients.

Rau immediately agreed, while her nursing staff sat incredulous because of the patients’ delicate conditions and the skill level required to care for them. The staff had to conduct a comprehensive review of each patient, visiting at their prior locations, in order to deliver adequate treatment once they arrived, Whittaker said.

Once staff felt they could deliver the proper care, they were on board, she said.

Whittaker, who has been at the hospital 21 years, now looks back on what has been accomplished. When she arrived, patient rooms sat empty for up to two weeks.

“Ms. Rau is the type of person who doesn’t take ‘no’ for an answer. If somebody tells her ‘no,’ she just goes around them and finds a way, and that’s what we needed.”