– Mercedes-AMG has confirmed an even higher-performance GT four-door, and it could have upward of 800 horsepower.

– There’s a “V8 BiTurbo E Performance” badge on the fender, meaning it should use AMG’s twin-turbo 4.0-liter V-8 paired with a more powerful hybrid system.

Mercedes has a lineup of electric vehicles on the way under the EQ name, and its AMG high-performance wing will dabble with them as well. However, Mercedes-AMG also plans to have its entire lineup employ hybrid powertrains soon, including this upcoming electrified version of the GT four-door, likely named the GT73, which will be targeted straight at the 690-hp Porsche Panamera Turbo S E-Hybrid. 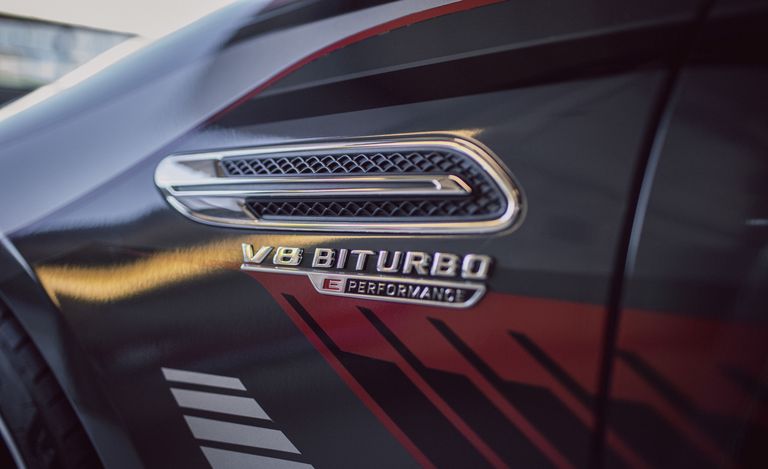 AMG hasn’t shared any details on the GT73’s powertrain yet, but we expect it to use a twin-turbocharged 4.0-liter V-8, which makes 630 horsepower in the GT63 S, in conjunction with a more powerful electric motor totaling around 800 horsepower. The 73 will need to have different type of hybrid system than the lesser GT four-door models (GT 53/GT 43), which use a 3.0-liter inline-six assisted by a small electric motor—and, in the GT53’s case, an electric supercharger—that adds no additional peak power. In our testing, the V-8-powered GT63 S hit 60 mph in 2.9 seconds, so it’s safe to say the 73 will have acceleration that borders on reality-warping. As with other GT four-door models, we expect all-wheel drive to help more of the power get to the ground.

A “V8 BiTurbo E Performance” badge (pictured above) adorns the front fender, and AMG says that the rest of its upcoming high-performance hybrids will fall under that E Performance name as well. Besides that, the GT73 should look similar to the current top-spec GT63 S with a gloss black front fascia. It’s also wearing AMG’s black cross-spoke wheels, which are available on the 63 and 63 S.