The Lamborghini Sián’s supercapacitor hybrid system has been getting attention since this limited-run Aventador-based special was announced, but the reality of it is a bit anti-climactic. While the Sián is a bona fide supercar experience, there’s nothing unusual or noteworthy about how the hybrid system acts or feels.

Although Lamborghini’s hybrid technology is both clever and pioneering, there isn’t very much of it. The compact system adds just 75 pounds to the weight of the car, which includes an electric motor integrated into the transmission. Power is stored in a supercapacitor mounted to the rear bulkhead. Lamborghini claims that the supercapacitor setup is three times lighter than a lithium-ion battery with similar energy capacity, although the system’s actual storage capability isn’t specified. Supercapacitors get their name because they store dramatically more energy than that of a typical capacitor found in electronic devices. Unlike a battery, there’s no chemical reaction when charging or discharging, so supercapacitors are very efficient and can charge and discharge rapidly. (In the Sián’s case, it can flow up to 600 amps of current.) 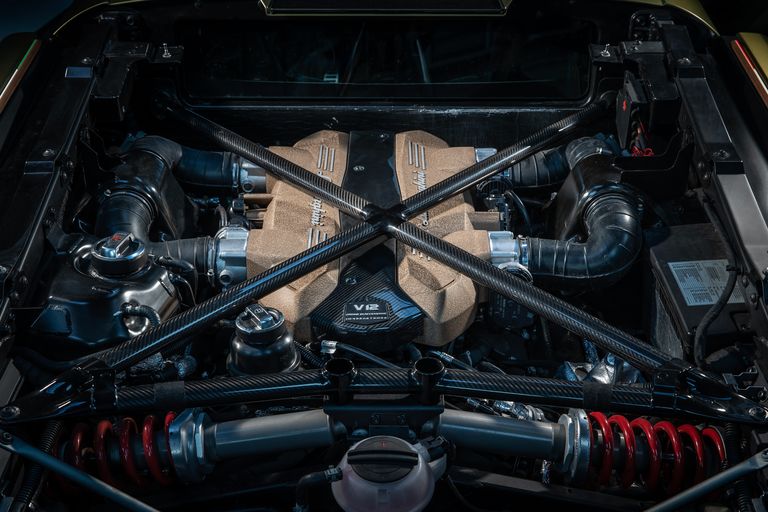 The Sián can’t move on pure electric power, but the supercapacitor adds a small amount of instant torque to help smooth clutch engagement during low-speed driving. The electric motor’s assistance also helps calm the brutal upshifts of the old-tech single-clutch seven-speed automated manual transmission by adding a small amount of assistance between shifts. The raw numbers make the hybrid’s junior status in the powertrain obvious: 34 horsepower versus the 6.5-liter V-12’s peak of 774 ponies, for a combined system output of 807 horses. It’s unlikely that any of the 63 Sián buyers will expect their exotic hybrid to do things a Prius does or even have the silent, unobtrusive progress of plug-in hybrids such as the Ferrari SF90 Stradale and McLaren Artura. Those buyers probably aren’t interested in whether or not the hybrid system improves fuel economy, either. It doesn’t, not even one bit. In fact, in terms of EPA figures, the Sián matches the Aventador in city (8 mpg) and combined (10 mpg) ratings, while netting one mpg worse (14 mpg versus 15) in its highway number.

Unlike most Lambos, the Sián hasn’t been named after a famous bull but rather the word “lightning” in Bolognese dialect. Its full title is more complicated: Sián FKP 37, with the addendum a tribute to Ferdinand (Karl) Piëch and the Austrian executive’s year of birth. Piech was the man who brought Lamborghini into the Volkswagen Group and who died just before the Sián’s debut in 2019. 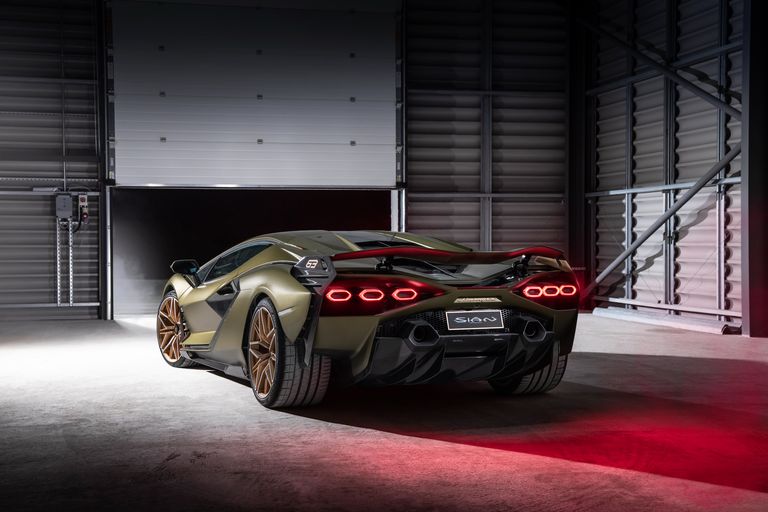 Even by the brand’s standards, the Sián coupe’s styling is outrageous. For open-air enthusiasts, an even more exclusive run of 19 roadsters is coming. The basic form is shared with the Aventador on which it’s based, with both cars employing the same carbon-fiber core structure. But the Sián’s makeover includes huge Y-shaped daytime running lights in front, a number of air intakes, a louvered engine cover, and a sextet of taillights that hang within vast air vents. This car has true superstar presence, and it’s difficult to stop staring at it.

Once the engine is running, you don’t want to stop listening to it, either. The Sián uses what is likely the angriest version of Lamborghini’s long-lived V-12. Outrageously loud from idle to redline, at lower speeds the engine buzzes and vibrates through the cabin. As the revs rise, its character changes as the exhaust note hardens and the induction sound deepens. The different parts of the soundtrack reach their most compelling harmonies as the engine approaches its 8500-rpm limiter. 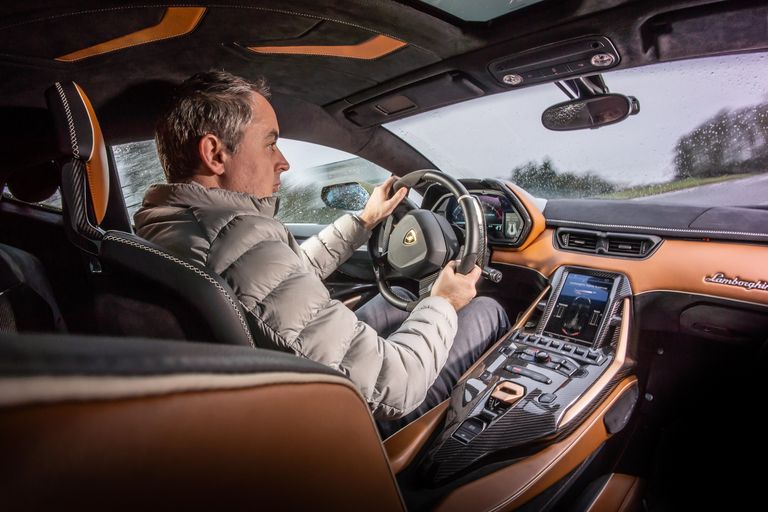 European COVID-19 travel restrictions meant our drive didn’t take place in Italy but at the Millbrook test track in the English midlands. England being England, the skies were dumping water. But on the proving ground’s two-mile high-speed oval, the Sián was able to demonstrate its searing acceleration and that its hybrid-aided gearbox does change gears with less brutality than before, although shifts still come with more of a jolt than they would from a dual-clutch transmission. While throttle response is impeccable, the Sián’s naturally aspirated V-12 lacks the low-rpm torque that most modern turbocharged engines deliver.

On Millbrook’s Hill Route—which could just about pass for a narrow, wet mountain road—the Sián’s size and weight are more evident. Its 82.7-inch width is substantial even by hypercar standards, and the combination of a low seating position and high beltline make it hard to gauge where the car ends. The rear view through the slats of the engine cover lends a jailhouse vibe to the cabin. Lamborghini claims a dry weight of 3530 pounds, so figure about 3950 pounds when loaded with fuel and fluids. Understeer dominates on the Hill Route’s many slower turns, and even the car’s rear-axle steering can’t overcome the unmistakable sensation of the front tires running short of grip before the rears. 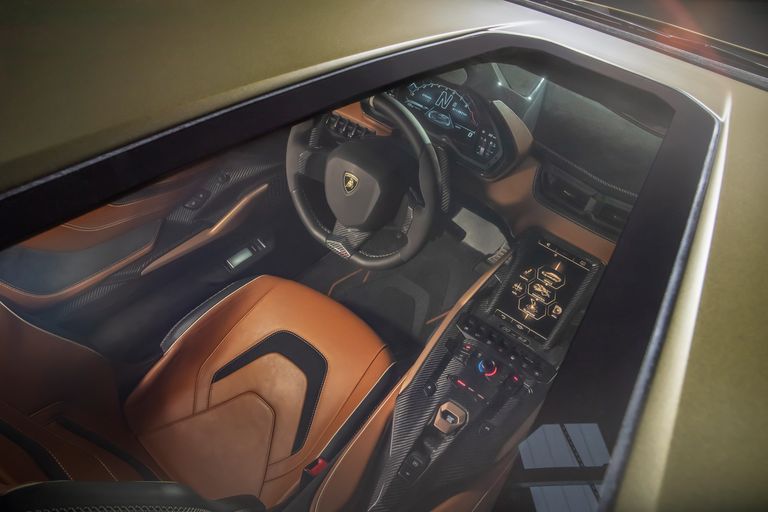 Millbrook’s faster turns suited the Sián far better. The light assistance of the power steering gains some heft as chassis loads increase, and the all-wheel-drive system impresses with its ability to find traction in wet conditions. Body control remains disciplined over larger crests, yet the ride is punishingly firm in all of the car’s drive modes.

The Sián’s cabin feels plusher than the Aventador’s but is short on headroom. A new portrait-orientated infotainment touchscreen sits in place of the Aventador’s smaller landscape-oriented display, and the electrochromic glass roof panel can be dimmed or brightened with the push of a button. But it’s obvious that the core architecture of the Sián’s interior is shared with the aging Aventador. Lamborghini’s Ad Personam bespoke service surely will be able to customize much of that similarity away for a price.

The Sián is not a technical triumph nor a radical manifesto piece. But it doesn’t really need to be. We already know that the Aventador’s replacement will use a more powerful hybrid system in conjunction with a retuned version of the big V-12. The Sián excels at doing what Lamborghinis do best—shout, show off, and win attention—while giving a glimpse of what’s in store from the Italian brand.