By Rodney Ho, The Atlanta Journal-Constitution

“That entrance foyer with the big two-story interior and double-winding staircase was perfect,” said film production designer Jefferson Sage to Variety magazine. “Off of that, there were two beautiful big rooms with giant windows and 18-foot ceilings.”

The primary bedroom in the palace in the film was Ross’ actual bedroom.

Ross, who loved the original 1988 film, was thrilled to have Eddie Murphy and Arsenio Hall traipse through his home. “They changed the wallpaper in the dining room so I asked them to keep it up there,” Ross told Variety. “They also created that huge dining room table for a dining scene that seats 50 to 60 people, and they left that for me as a gift. It’s humungous.”

The mansion, once owned by boxing great Evander Holyfield, is one of the largest in Georgia at 45,000 square feet on 235 acres. It has a whopping 109 rooms, including 12 bedrooms and a dining room that could seat 100 people. At the time Ross purchased the home in 2015, it boasted a 135-seat movie theater, an Olympic-size pool and a baseball field as well as a separate 4,000-square-foot home.

Holyfield once said upkeep of the mansion exceeded $1 million a year. The boxer lost the property in 2012 due to foreclosure.

The mansion was also featured in the 2018 film “SuperFly” and in an episode of Fox’s “Star.”

The reviews for “Coming 2 America,” which came out on Amazon Prime on Thursday, have been decidedly mixed.

The Metacritic average score of 42 reviews was 52 out of 100, slightly worse than “Wonder Woman 1984″ (60) but better than the just-released “Tom & Jerry” (33). Rotten Tomatoes, taking a broader array of 150 reviewers, came up with almost the same score of 51 out of 100. Viewer reviews also averaged out in the middle, at 51%. Rotten Tomatoes’ summary says the film “reminds audiences that there’s an equally fine line between sequel and retread.”

Ann Hornaday of The Washington Post wrote that this “long-awaited sequel aims squarely to serve its audience, with no apology and a surfeit of pleasures, both simple and wildly extravagant.”

Vince Mancini of Uproxx wrote that “everyone seems to be having fun, and not in a needy way. Even when it’s not laugh-out-loud funny, ‘Coming 2 America’ is still fun to look at.”

Others found the humor lacking.

Odie Henderson on RogerEbert.com opined that “a sense of familiarity is often enough to keep the movie coasting on a sea of goodwill, but some of the plot ideas are bound to raise a few eyebrows and lower a few eyelids.”

Chuck Bowen of Slant was unforgiving: “The film feels like the result of an improvisational shoot that bore little fruit, as it’s scattershot and patched together, with talented actors mugging wildly in an effort to paper over the fact that there are yards of setup with no real plot, no emotional resonance, and virtually no continuity even within individual scenes.” His conclusion: “desperate, belabored and thin.” 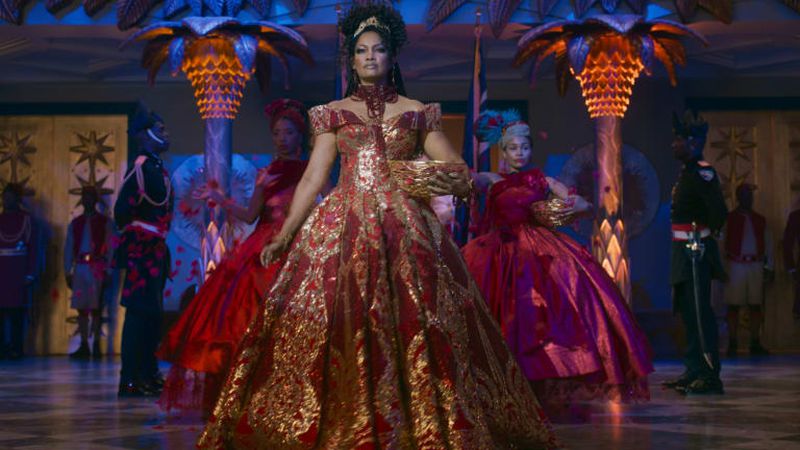 Ruth E. Carter won an Oscar in 2018 for her work in “Black Panther.” She returns again for more extravagant fashion work for “Coming 2 America.”

In an extensive interview, Carter told Forbes: “I was challenged to keep the things that people expected and loved in it. I also had to create a modern world that a new generation could see and say, ‘Yeah, this is what I would imagine Africa and Zamunda to be like.’”

Carter said virtually all the costumes were custom-made: “We went out all over the world, including to East India, where we could have things beaded, sequined, and opulent looking.”