We talk to current and former Google employees about how years of labor organizing at the company have helped shape the newly formed union’s guiding values.

Google employees in November 2019 gathered to accuse management of retaliating against some of the company’s workers and showing a lack of transparency.

Organized labor came to Silicon Valley earlier this year when employees of Alphabet, the parent company of Google, formed the Alphabet Workers Union. It’s the first union to be open to any Alphabet employee anywhere in the world, including the temporary workers, vendors and contractors who make up more than half the company’s workforce.

With a membership of over 800 people, the union represents less than 1% of Alphabet’s current employees, but the union’s relatively small size hasn’t stopped it from taking action and achieving results.

The AWU filed its first complaint with the National Labor Relations Board in early February on behalf of contractor Shannon Wait, who was briefly suspended after complaining about conditions in the data center where she works. Less than a week after she filed the complaint, Wait posted on Twitter that she’d been invited back to work and cited the incident as evidence that the Alphabet Workers Union has “legitimate power.”

The union is the result of a lengthy struggle between activist employees and Alphabet leadership over how conflicts within the company are resolved and how Google’s powerful technology is deployed. The disagreements stretch back to 2018 with the reveal of two secretive projects that some employees say conflicted with the company’s “don’t be evil” motto.

Project Maven had Google developing AI for drones that could have been weaponized, and Project Dragonfly involved the development of a search engine for the Chinese market that would allow government censorship and tracking.

“The biggest thing that concerned us was that people on that project [Dragonfly] had no idea they were on that project until the information about it got leaked,” said Chewy Shaw, executive vice chair of the Alphabet Workers Union. “It was similar with Project Maven.”

In both cases, employees organized campaigns against the secretive projects. Later, Google reportedly decided not to renew or launch either project.

Lessons from those struggles have found their way into the seven guiding values of the Alphabet Workers Union. One of those is transparency, and another is the nourishing of a “welcoming environment … free from harassment, bigotry, discrimination and retaliation.”

Google has a policy against harassment and retaliation, which it has publicly shared. “To make sure that no complaint raised goes unheard at Google, we give employees multiple channels to report concerns, including anonymously, and investigate all allegations of retaliation,” a Google spokesperson told CNET. “Still, some employees over the years have said that these policies don’t always live up to their intended purpose.”

A key example concerns Google’s handling of sexual misconduct claims against Andy Rubin, a former Google executive and the creator of the Android mobile operating system. In October, 2018, The New York Times reported that Google paid Rubin $90 million as part of his exit package when he left the company in 2014.

The revelation sparked the Google Walkout for Real Change, during which about 20,000 Google employees took to the streets in protest in November 2018. One of the organizers of that walkout, former Google employee Meredith Whittaker, told CNET in the above video that she believes it’s “the largest labor action in tech to date.” 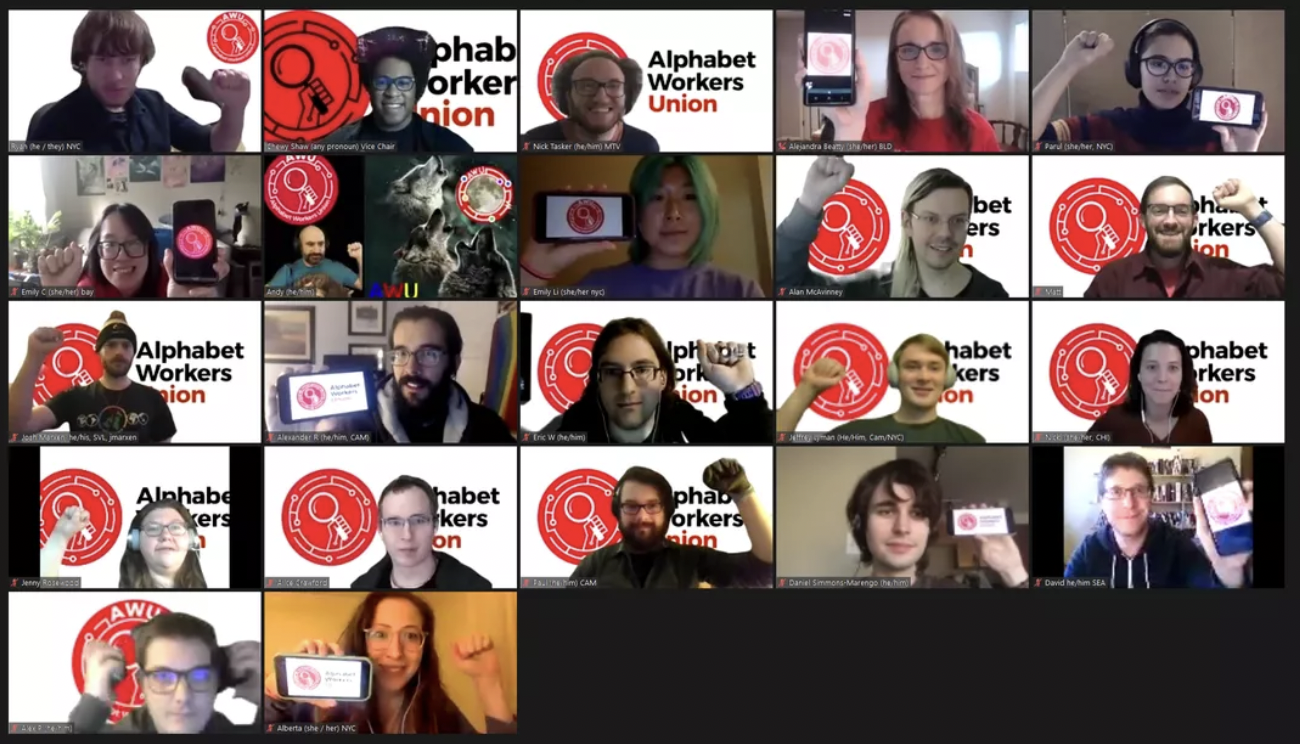 Members of the Alphabet Workers Union show solidarity during a Zoom meeting.

Shaw said that the firing and departures of several outspoken employees, including walkout organizers like Whittaker and the Thanksgiving Four(sometimes called the Fired Five to include Kathryn Spiers), led some workers to conclude that forming a union was the best way to continue the ongoing struggles inside the company.

Kara Silverstein, director of people operations at Google, told CNET that the company has worked hard to create a supportive and rewarding workplace for its workforce. “Of course our employees have protected labor rights that we support,” she said. “But as we’ve always done, we’ll continue engaging directly with all our employees.”

Alphabet isn’t the only tech giant facing a growing labor movement. In Bessemer, Alabama, a group of Amazon workers are pursuing union ambitions of their own. Workers have until the end of March to cast their votes on whether the Retail, Wholesale and Department Store Union should represent them. The vote count is set begin on March 30.

“We need to organize tech, because its power over our core social institutions is profound,” Whittaker said. “I think the job now is to build [the Alphabet Workers Union] into something that’s bold and capacious enough to fight for both the social justice demands and the bread-and-butter issues and to recognize that they’re inseparable.”

Workers in an Alabama Amazon warehouse are deciding whether to unionize. Twitch says it doesn’t allow any political ads. 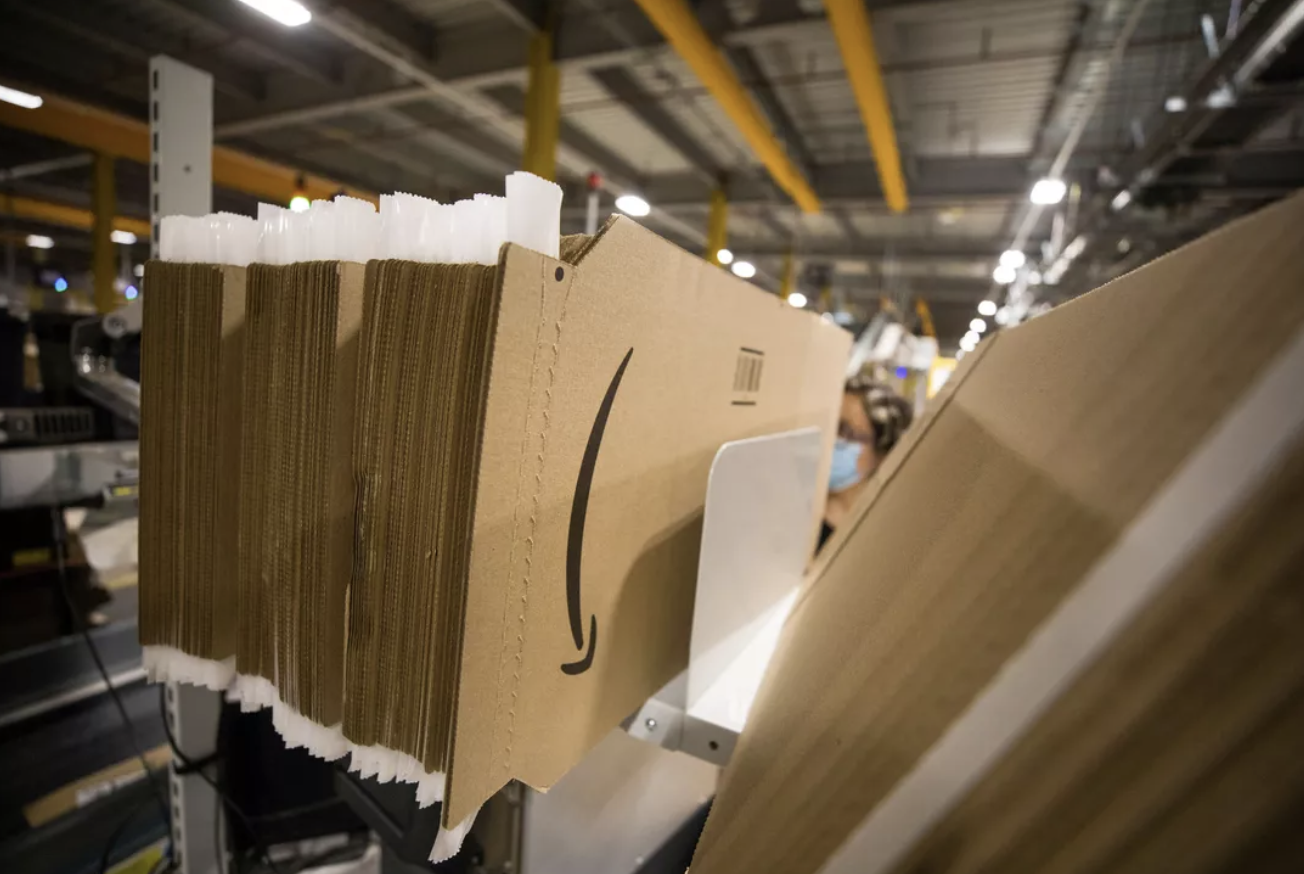 Warehouse workers in Alabama are voting on whether to unionize. Twitch pulled Amazon’s anti-union ads from its platform Thursday.

Livestreaming service Twitch has pulled anti-union ads placed by Amazonduring an ongoing union election at a warehouse in Bessemer, Alabama. The ads, each just over 30 seconds long, featured workers explaining why they plan to vote against forming a union, saying they don’t want an outside group coming in when they already have everything they need.

Twitch is a subsidiary of Amazon, and it cited a policy against running political ads as its reason for removing them.

“Twitch does not allow political advertising, and these ads should never have been allowed to run on our service,” a company spokesperson said in a statement Thursday. “We have removed these ads and are evaluating our review processes to ensure that similar content does not run in the future. We are grateful to our community for bringing this to our attention.”

Amazon didn’t immediately respond to a request for comment. The union election is set to conclude at the end of March, with 5,800 employees receiving ballots by mail and choosing whether to let the Retail, Wholesale and Department Store Union (RWDSU) represent them in contract negotiations. In addition to the ads seen on Twitch, Amazon has run high-profile ads in The Washington Post and The New York Times advocating for a $15 federal minimum wage. These ads don’t mention the union election.

RWDSU President Stuart Appelbaum criticized Amazon’s anti-union ads, saying they were an attempt by the online retail giant to “gaslight its workers about the dreadful working conditions at its Bessemer warehouse.”

The election is the first union vote at a US Amazon warehouse since 2014, when a group of Delaware workers chose not to unionize. In the Alabama election, Amazon asked the National Labor Relations Board to require workers to vote in person at the warehouse rather than by mail, saying it would allow higher rates of voting. Union organizers objected, with concerns about exposure to the coronavirus, and the NLRB ruled that the vote could be conducted by mail.

The union drive has drawn national attention as Amazon continues to post increasingly massive profits during the pandemic, with actor Danny Glovervisiting workers in person on Monday and tweeting his support for the union effort.