The blockchain-backed technology shines a spotlight on digital ownership.

Artist Ryan Maloney had planned a conventional launch for his latest project, a series of collector cards called Beastly Ballers that feature cartoon creatures decked out in football gear. The New Canaan, Connecticut-based illustrator was going to use a Chinese printer to package the cards; then he’d market them online and sell them at $4.99 for a pack of 10.

Instead, Maloney skipped the physical product all together. He listed the card images on the online marketplace OpenSea as NFTs, or nonfungible tokens, the digital assets that are upending the art world. Maloney had followed the rise of the technology and decided to give it a try.

He began to rack up bids after a day or two. One card, with a drawing of a yeti named Yeta wearing a helmet and pads, sold for $85. In all, he’s tallied more than $700 in sales on 14 cards. For a working artist, it’s a meaningful haul, and more than he would’ve made going the traditional route.

“Artists are always looking for ways to make money off of their work,” Maloney says. “Once the word got out on crypto art, the gold rush really began.”

The gold rush for NFTs — essentially cryptological certificates of authenticity — is well underway. On Thursday, Christie’s, the 255-year-old British auction house, will close the sale of its first-ever digital-only art piece, a composite of 5,000 pieces created over as many days by the artist Beeple. The final price tag is sure to be eye-popping: As of this writing, bidding stands at $9.75 million. As Maloney’s story highlights, however, the implications of NFTs ripple far beyond the multimillion-dollar hammer prices set at fancy auction houses.

NFTs bring to digital art a one-of-a-kind or limited-edition quality that’s been lost in the copy-paste, post-repost world of the internet. Each work of art is associated with a proof of ownership that’s recorded on a blockchain, the distributed ledgers most commonly associated with Bitcoin and other cryptocurrencies. The authentications, which can be applied to images, videos, music and other digital files, designate the original. Copies and copies of copies might abound on the web. But only one person can lay claim to the NFT behind it.

The technology is beginning to touch every corner of art, entertainment and media. In sports, a clip of Lebron James ruining a fast break sold for $100,000 on Top Shot, the NBA’s marketplace for highlight reels. In music, Kings of Leon last week became the first band to announce the release of an NFT album, with three types of tokens that include special artwork and perks. The pop star Shawn Mendez last month announced a line of digital goods in the form of NFTs. In the media world, the Associated Press is auctioning off an NFT electoral map of the 2020 US presidential contest, which uses data that was published on the blockchain. Twitter CEO Jack Dorsey is even selling the first tweet on the platform as an NFT.

Proponents say NFTs have the potential to revolutionize the way artists at every level can sell and distribute their work. In turn, NFTs could change the way people interact with and consume art in the digital era.

The potential is huge, says Joe Saavedra, CEO of Infinite Objects, a company that makes frames for looping videos and other digital art so that the works can be displayed in homes and museums. His company collaborated with Beeple on an earlier NFT release, offering what he calls a “physical twin” frame to display the NFT, with a QR code on the frame that links to the token.

“Across the board, everyone is going to have to reckon with how to navigate this space,” he says. “Art is the tip of the iceberg.”

NFTs are powerful because they tackle deeply rooted issues in the digital realm: ownership and compensation.

The internet grew into the place we know now because data could be easily replicated and user-generated content proliferated on the web. YouTubers and TikTok users have amassed huge followings by giving away content, which is sometimes professionally produced and expensive to make. Napster brought the music industry to its knees because it obliterated the business model when artists and labels never expected it. Facebook rants come free of charge, whether you like them or not.

Sure, you can support online creators by donating to their Patreon accounts. But NFTs provide another avenue of connection between creator and fan. “NFTs give digital artists the agency to sell their work with the assurance of authenticity and rarity,” says Meghan Doyle, a specialist in the postwar and contemporary department at Christie’s. “They are creating a new way forward.” 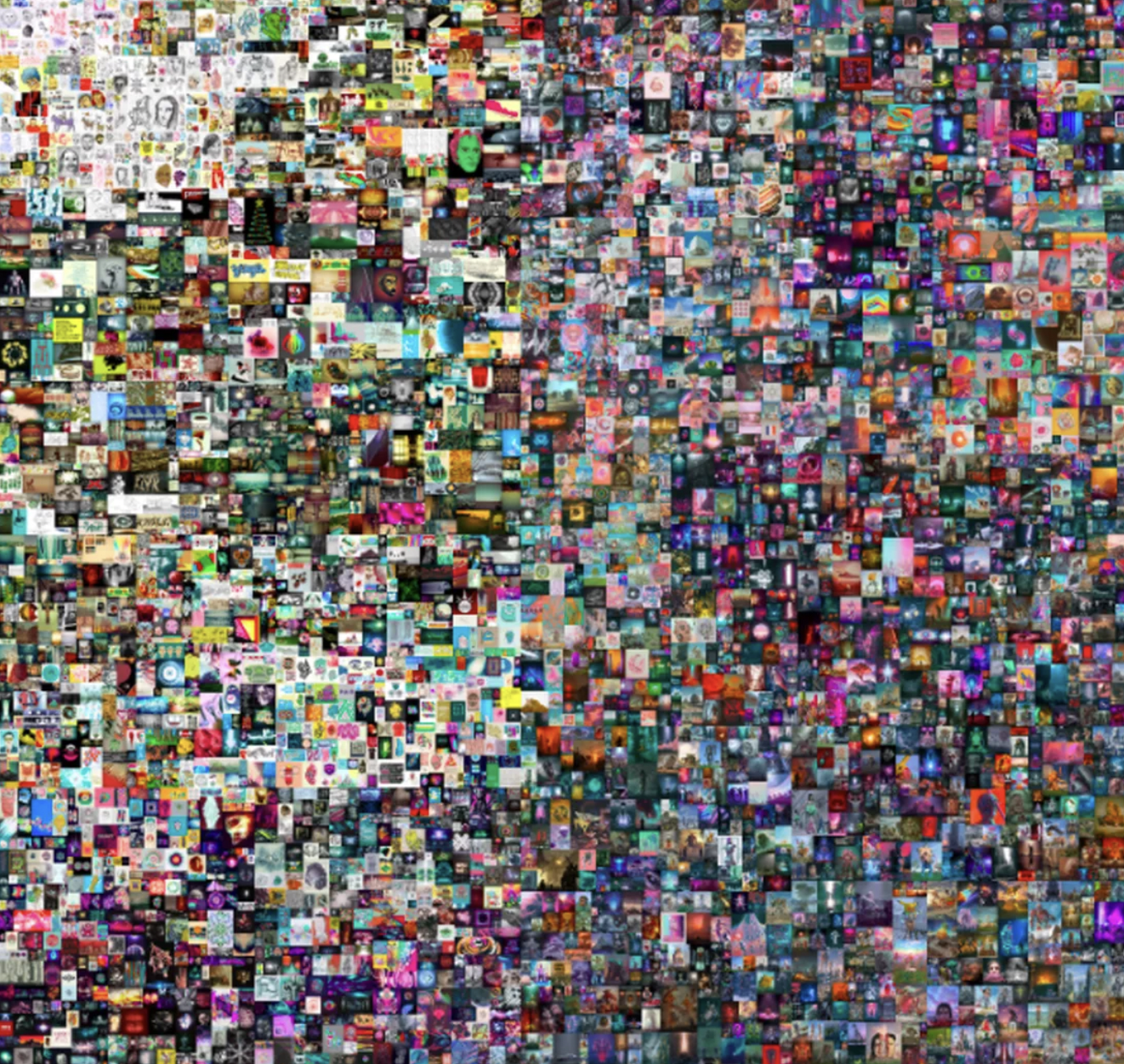 A piece by the artist Beeple being auctioned as an NFT at Christie’s.

In a way, NFTs restore a dynamic that’s sustained the art world for centuries. An art collector might covet an original Basquiat — instead of a print of a Basquiat — so they could have the version the artist stood over while creating it. An NFT buyer might feel closer to what the artist has deemed the “authentic” version, even though it can be identically reproduced. NFTs can also work like rare reprints, with only a finite amount of certified copies. You can listen to the Beatles’ White Album on Spotify, but owning an original pressing might transport you back to the recording session.

“Humans put real meaning on the original,” says Coye Cheshire, a social psychologist at the UC Berkeley School of Information. “There’s a connection. It connects them to a time and place.”

NFTs are getting a lot of attention right now, but they aren’t new. The technology really took off in 2017, after the blockchain Ethereum introduced a new standard that supported the unique tokens. That year, a Canadian studio called Dapper Labs created a game called CryptoKitties that allowed people to buy, sell and collect virtual cats. The game was a hit and popularized NFTs. In 2020, the value of the NFT market was estimated at $315 million, according to a report by Cointelegraph.

There are downsides to NFTs. Artists complain of the sometimes steep fees that come with using the technology.

The most popular blockchain for NFTs right now is Ethereum, and a “gas” fee is charged anytime a transaction is made on the network. The name comes from the cost of the computation needed to process transactions on the blockchain — akin to gas that fuels a car to make it run. Since the blockchain is decentralized, the price of gas fees is determined by several factors, including supply, demand and the value of Ethereum.

Gas fees come at various points in the process. When artists join a marketplace, sometimes they’re charged a onetime gas fee on their first listing. Buyers, too, have to pay a fee when they purchase a work.

“It suddenly becomes very difficult for new artists to come in and list a piece,” says Mateen Soudagar, an Australian investor who writes a blog about NFTs. It can hurt the market, too. He says fees have skyrocketed in the past to $200 or $300. “I’m not going to pay $200 for a piece of art selling for $50.” To ease the burden for artists, some marketplaces have introduced gas-free NFT creation.

Soudagar has been involved with NFTs for years, first investing in virtual land in games. He believes video games will be the next frontier for NFTs. The technology will give people the ability to buy unique items, he says, like rare early skins, or armor or weapons for avatars.

Maloney, the illustrator from Connecticut, says he’s willing to put up with high gas fees if it means getting more of his work out there and helping NFTs become more mainstream. He works with toy companies through the creative agency he founded, MediaLuv. He said he’s had conversations with clients interested in experimenting with NFTs.

“I feel like this is the way trading all goods and services will be in the future,” Maloney says. “It’s almost too good to be true.”