Make tartare for someone you really love—like yourself.

Carnivores are divided into two camps: either you love raw meat or you don’t. By raw, I mean raw. Not rare, or seared, or cooked via sous vide even a little. As you’ve probably guessed, I am vehemently of the former order. I’ve eaten raw beef almost all my life, it’s basically the birthright of Eritreans and Ethiopians for whom raw beef is a common delicacy that has been elevated to an art, whether as seasoned cubes of gored gored, buttery chopped kitfo, or plain tere siga—literally “raw meat”—served with awaze sauce and freshly prepared mustard.

I’m not alone. Chopped raw meat, internationally referred to as tartare, is beloved from the mezze tables of Beirut where kibbeh nayyeh combines lamb, bulgur, herbs and olive oil, to the French bistros in every major city where countless yolk-anointed mounds of beef and finely diced pickles are churned out every day.

“Typically, this is a dish that people enjoy when dining out, but are afraid to prepare at home,” says Jason Yang, head butcher at Brooklyn’s Fleishers Craft Butchery which sells meat to restaurants and in their four stores across New York and Connecticut. Since the start of the pandemic, Yang says they’ve noticed an increase in retail requests for meat to make tartare.

If you didn’t grow up with tartare at home then you might approach the process with some trepidation, but starting with high-quality meat is the first thing you can do to ensure success. It’s best to get meat directly from a specialized butcher, not a supermarket where the risk of contamination is higher.

A butcher can also give you a better cut. Many tartare recipes recommend using beef filet, a widely available tender muscle low in fat, connective tissue, and, unfortunately, taste. Filet is also among the most expensive cuts on the cow. Yang recommends beef top round and beef sirloin flap (also known as bavette), which are cheaper and “make a much better tartare due to their texture and more robust flavour.”

It’s important to start with a whole piece of meat rather than something ground, since “properly handled whole muscles have a much lower risk of pathogens,” Yang says, and running the meat through a grinder is a potential source of contamination from other cuts. At Fleishers you can ask them to chop the meat up for you, but it’s easy enough to do at home, right before you serve it.

Keep the meat cold in the fridge until you are ready to prepare it. You want about four ounces of beef per person for an appetizer and eight ounces for a meal. If this is your first time taking a knife to meat like this, you’ll want to practice on a single portion or two to get the hang of it because hand-chopping even half a pound of beef can be tiresome. 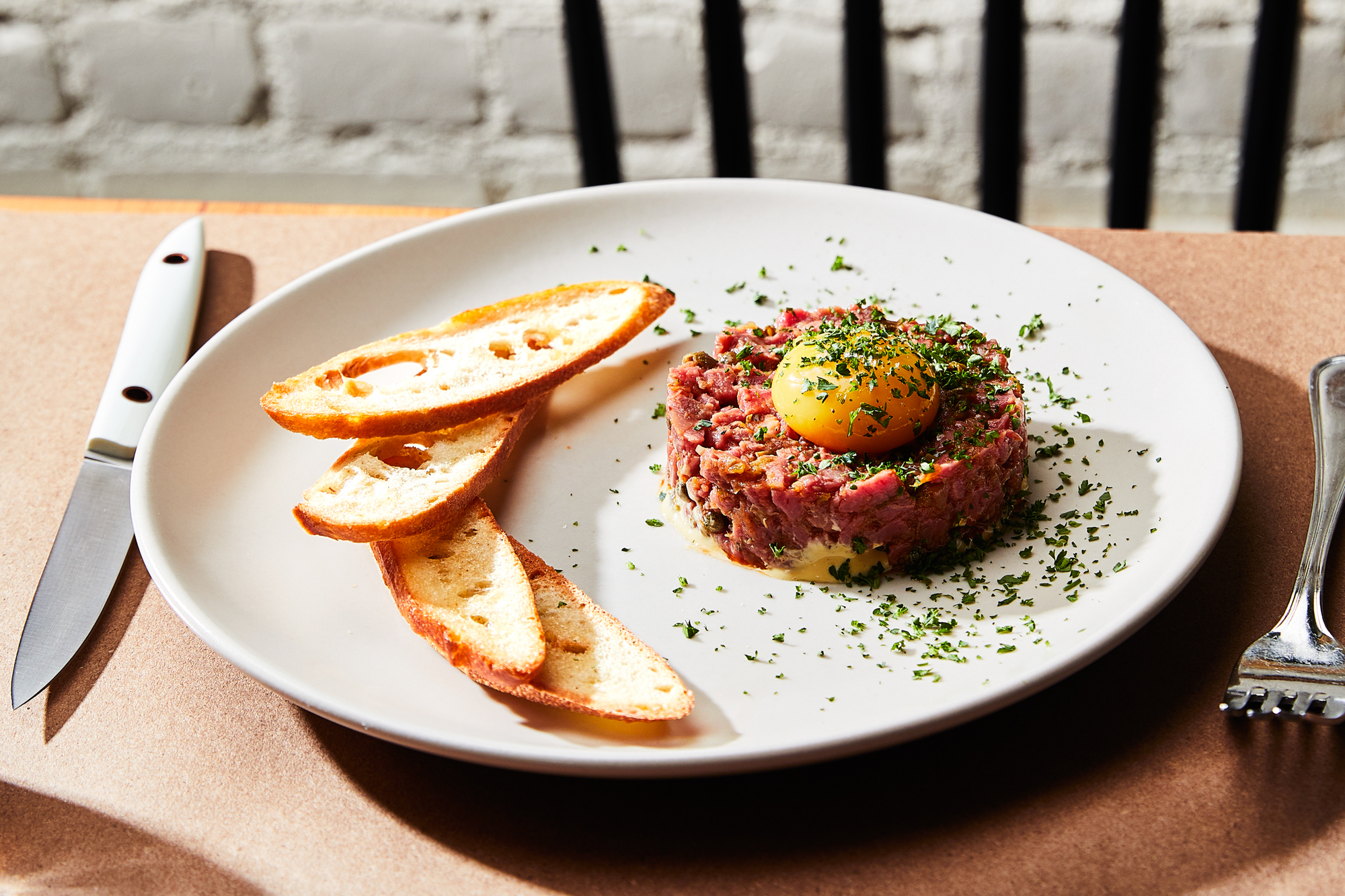 Starting with a sharp knife and impeccably clean cutting board, your goal is to cut the meat into fine, even cubes. Depending on the cut of beef, I work with about half a pound at a time, starting with long slices against the grain which I then cut into strips and then cubes, followed by another go through everything at the end to check my work, still keeping that roughly chopped texture. Take care not to over process the meat, especially when working with filet.

When I’m feeling traditional, I lightly toss the beef with my fanciest olive oil and finely minced shallots and capers before gently adding a dressing made with egg yolk, lemon juice, Tabasco, worcestershire sauce, and salt and pepper, all to taste. Unlike the classic restaurant presentation, I like tartare to be properly dressed when it hits the plate. Once seasoned, tartare should be served immediately, so remember to lightly chill a bottle of Gamay or Cabernet Franc beforehand and time your french fries accordingly.

Most of the time, however, I season tartare with bold spices that enhance the iron-rich taste of raw meat. Kitfo, which you can find at most Ethiopian restaurants, is made by blooming mitmita (a hot chili blend), ground cardamom and black cumin in clarified butter that is then mixed with raw beef or lamb. The last time I made tartare I tossed a chopped eight ounce filet mignon with hot sesame oil, gochugaru, grated ginger, scallions, toasted sesame seeds, and soy sauce for salt, before heaping it on a bowl of sushi rice. Unfortunately, I didn’t have a savory yamahai sake to pair with it at the time.

Few dishes are as primal as tartare, and few are as tedious. Between shopping and chopping à la minute, this no-cook recipe is one that I only make occasionally. Steak tartare is a special dish best prepared for someone you like a lot, someone who really deserves it. More often than not, that person ends up being me.