– Vacationers are starting to return, propping up fares and hotel rates.

– Bargains are still out there with business travelers expected to be slower to return.

Thinking about finally taking that vacation? You’re not alone.

Millions of Americans, many cooped up for a year, are hitting the road and taking to the skies, as more people get vaccinated against Covid-19. President Joe Biden last week said all American adults will be eligible for a vaccine by May.

As more people grow confident that the threat of Covid-19 is fading, it’s becoming harder to find the rock-bottom fares, some in the double-digits, that airlines offered when they were more desperate to fill planes. Hotel rates are also ticking up.

Travel-search site Kayak, said searches for summer travel have been up 27% each week since Biden’s announcement and said that airfares for top 100 most-searched U.S. destinations are up 7% month-over-month. 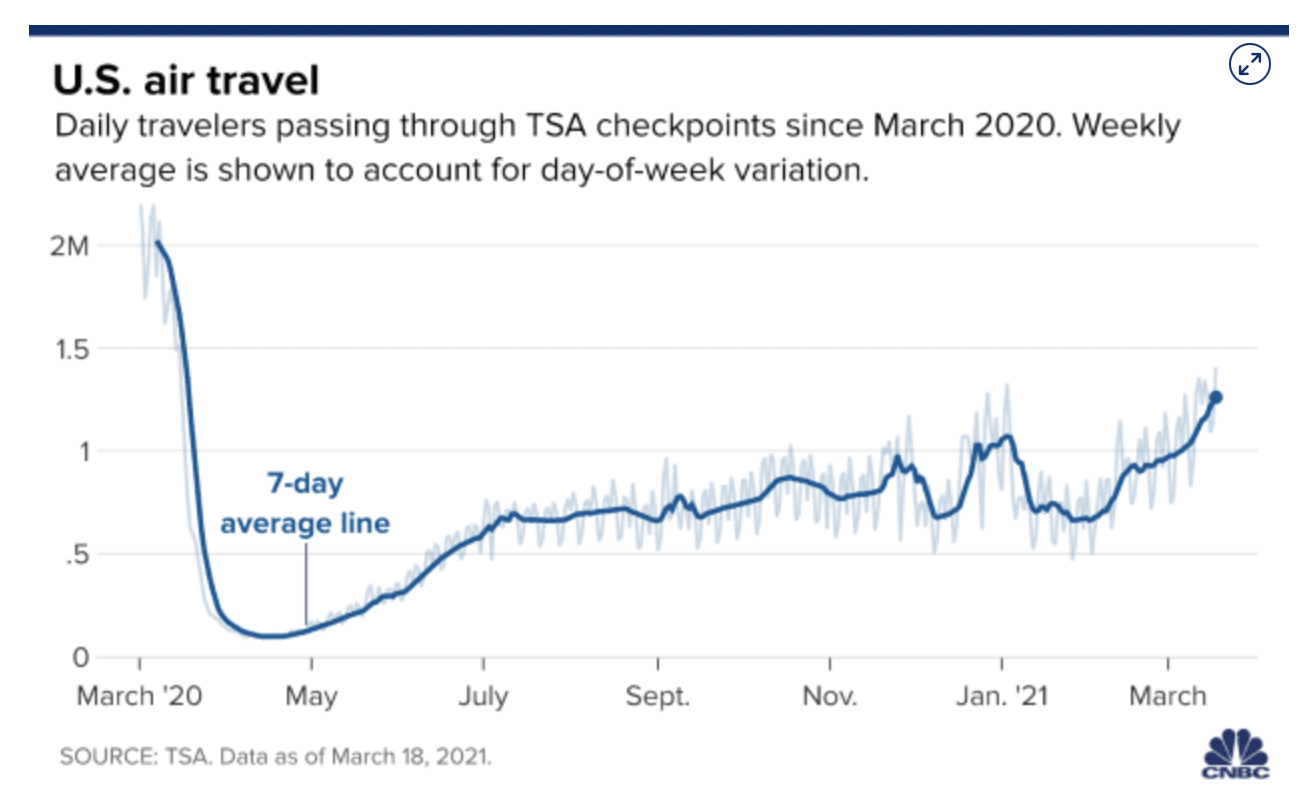 “Domestic airfares are rising. While discounts can still be found, they’re no longer falling into consumers’ laps,” said Jamie Baker, JP Morgan airline analyst. “Discounted fares increasingly require a hunt, and for many consumers that have been locked up for a year, they’re probably not up to the effort.”

The cheapest domestic leisure airfares, which include those promotional fares that airlines send to your inbox, were $59.48 as of March 15, still 26% lower than a similar week in 2019 but up more than 6% on the week, according to Harrell Associates, a firm that tracks airfares. Average leisure fares were nearly $187, up close to 5% on the week and close to 9% higher than a similar point in 2019.

Airline executives on Monday said bookings were picking up in March and stretching to the summer. U.S. carriers are on track to lose on average of $150 million a day this quarter, according to Airlines for America, but CEOs of United Airlines and Delta Air Lines said the uptick will finally staunch their cash burn this spring. JetBlue is calling flight attendants back from unpaid a month early because of stronger-than-expected demand.

“As long as there is not a setback we are on the road to recovery and we can put those days of talking about cash burn, layoffs and things like that largely in the rear view mirror,” CEO Scott Kirby told CNBC’s “Squawk Box” on Tuesday.

Hotel occupancy in the U.S. this month through March 13 is averaging more than 51%, the highest in more than a year, according to hotel data analysis firm STR. In hot vacation spots like Miami, occupancy is nearly 70% with average rates of $228 a night, the highest prices since February 2020.

Jamila Ross, owner and founder of The Copper Door B&B in Miami said she had discounted her January and February rates by more than 40% to $100 a night but that that she’s since been able to increase them to $120.

Covid was particularly devastating to her hotel because it was so reliant on the cruise industry due to its proximity to the port.

She said the hotel is now about 70% full, up from 40% last month though she’s holding back some inventory due to Covid.

“We want to be a responsible brand,” she said. “We can’t afford any type of slip ups.”

Maura Gannon, general manager of The Mermaid & the Alligator, a nine-room hotel on Florida’s Key West said: “As soon as people have been getting the vaccines phones have been ringing off the hook.”

She said that some travelers are asking about bookings in May and June, traditionally part of the lower demand season.

Some travelers are eyeing high-end accommodations that allow them to continue to physically distance from other guests.

“Villas are going first for the entire year,” said Viktoria Riley, director of marketing at the Ocean Club, a Four Seasons Resort in the Bahamas. Three-bedroom villas go for $16,500 a night in the low season that starts in mid-April and runs through late November.

To be sure, fares and room rates have taken a deep plunge in the pandemic and there are still deals out there, particularly with business travelers still mostly sidelined. Demand is still nowhere near the levels of before the pandemic.

In the third quarter of 2020, the latest available data, U.S. domestic flights averaged $244.79 the lowest in more than 25 years, not adjusting for inflation, according to the U.S. Department of Transportation.

Airlines, however, have sharply reduced capacity to match weak demand, meaning there are fewer seats out there. They are expected to add more seats as the peak summer season approaches.

And with much of international travel still off-limits, the domestic leisure destinations have become the place to go.

“U.S. travelers are being diverted in a way into the U.S. and the handful of countries we’re allowed to visit,” said Henry Harteveldt founder of Atmosphere Research Group, a travel-industry consulting firm. “That is shifting the demand patterns and therefore shifting airfare pricing.”