Impressively refined, seriously quick, and at $80,995 to start, the 500-hp Audi SQ7 is a highly compelling three-row performance SUV.

The Audi Q7 is the mother of SUVs within the sprawling Volkswagen Group. Based on the conglomerate’s MLB-evo platform, it’s the fertile womb from which has sprung the sleeker, two-row Audi Q8, as well as the Porsche Cayenne, a British love child called the Bentley Bentayga, and an Italianate bastard son, the Lamborghini Urus. And in high-performance SQ7 guise, Audi’s largest crossover is perhaps the most versatile utility vehicle of them all.

Keep in mind that our SQ7 test car weighed 5311 pounds and ran from a dead stop to 60 mph in just 3.5 seconds. It whipped through the quarter-mile in 12.0 seconds flat with a trap speed of 113 mph—staggering performance figures for a vehicle rated to tow 7700 pounds. And it features three comfy rows of seats, amazing traction, an utterly serene ride, and just about every conceivable tech toy available in a modern automobile. 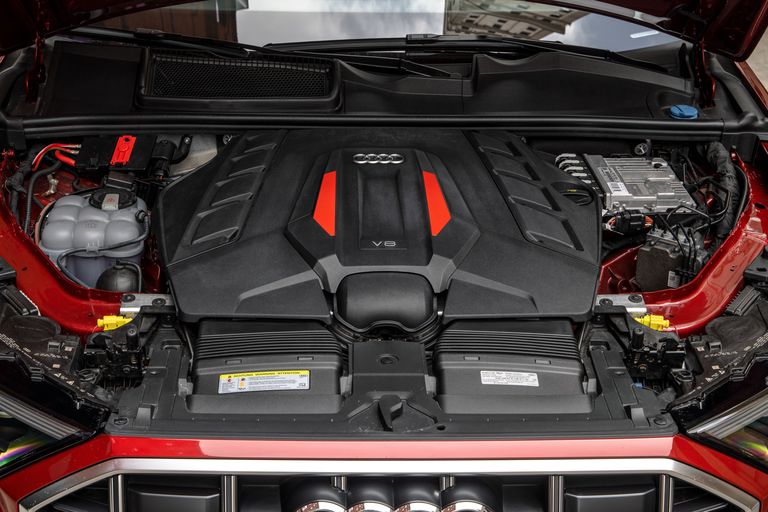 Of all the MLB-evo-based vehicles, the Q7 lineup is both the least hoity and the least toity. But its platform has all the hallmarks of Audiengineering. The engine is longitudinally mounted, hanging forward of the front axle line, and it feeds a ZF eight-speed automatic transmission and the Quattro all-wheel-drive system. The suspension consists of multilink arrangements front and rear. The Porsche, Bentley, and Lamborghini versions are all fancified riffs on the basic Audi formula. In a way, the Audi Q7 is the essential MLB-evo, the one that expresses this chassis’s character largely unfiltered.

All Q7 models gained a refresh for the 2020 model year that encompassed updated styling tweaks and a revised interior with more technology. The base Q7 45 model is powered by a turbocharged 2.0-liter inline-four rated at 248 horsepower, and the Q7 55 now employs a 335-hp turbo 3.0-liter V-6. But the SQ7 (and SQ8) steps that up to a wonderful 500 horsepower and 568 pound-feet of torque via Audi’s outstanding twin-turbocharged 4.0-liter V-8. It’s the same engine Audi uses in, among other models, the S8 sedan. Versions of this V-8 also show up in various Porsches, including the ripping Cayenne Turbos, along with the Bentayga and the Urus. This engine has made as little—it’s a relative term—as 414 horsepower, and as much as 641, but they’re all basically the same Hungarian-assembled powerplant. While the Q8 lineup includes an even higher-performance RS Q8 variant that boosts the V-8’s output to 591 horses and 590 pound-feet, the SQ7 rarely left us wanting for more thrust. 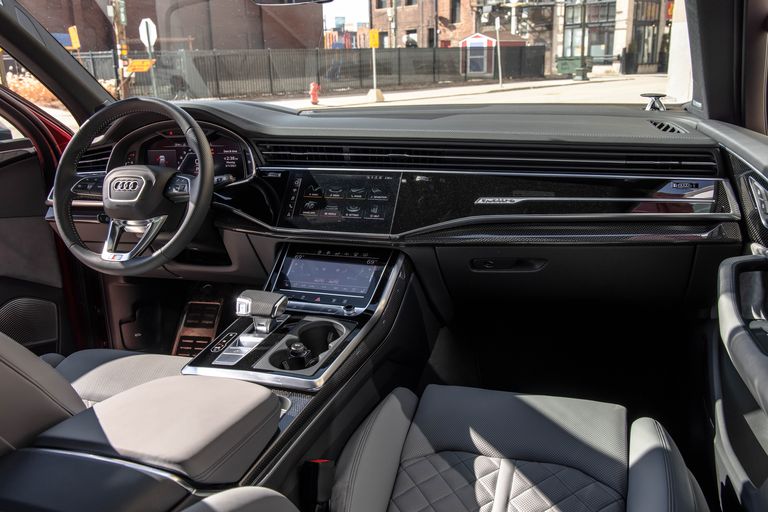 With its adjustable air springs lowered over the 21-inch wheels wrapped in 285/40R-21 Continental ContiSportContact 5 SUV tires, the SQ7 exudes a substantial curbside presence. Being an Audi, its front grille is vast, and the optional $1650 laser LED headlights do a little dance when prompted by the driver’s approach. Yet, the overall look isn’t that much different from other Q7 models. Just a tad meaner.

Settling into the diamond-stitched leather sport seats, with the 12.3-inch digital instrument display straight ahead and the 10.1-inch top and 8.6-inch bottom touchscreens in the center stack, the SQ7’s interior is more straightforward than those of its Bentley, Porsche, and Lambo counterparts. The steering wheel rim is thick, wrapped in soft leather, and has a good grippy squish to it, although we wish the plastic shift paddles mounted on the back of the wheel had a more satisfying feel. Press the start button and the resonators in the exhaust system rumble to life with a deep, refined growl. Our test vehicle featured the $5000 Bang & Olufsen sound-system upgrade, but we hardly listened to it when the four oversize exhaust tips emit such pretty noises. 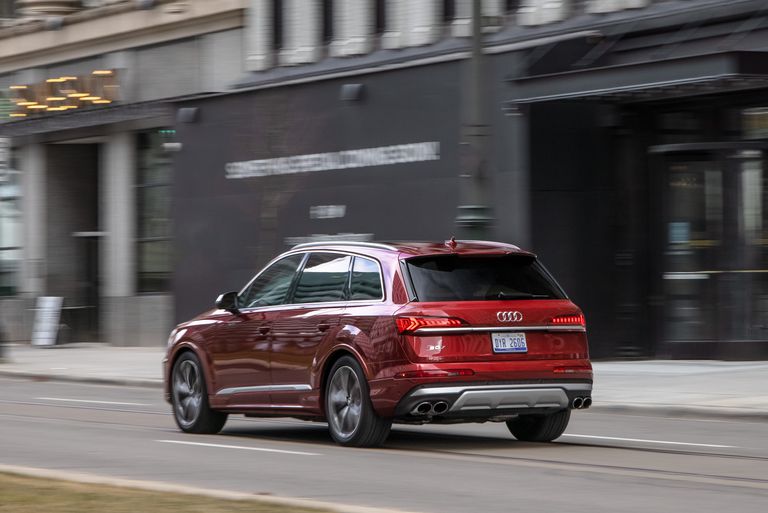 It’s a battle to figure out which adjective works best to describe the SQ7’s power delivery. “Startling”, “astonishing”, and “tremendous” all work well enough that it’s tempting to layer them atop one another. Step on the SQ7’s accelerator and it seems as if a half-ton of heft melts away from its flanks. Over California’s Route 33 between Ojai and the Cuyama Valley, the SQ7 is more entertaining than many vehicles that weigh half as much. Its steering is nicely weighted and combines with a rear-axle steering system that seemingly shrinks the 117.9-inch wheelbase in parking lots, and lengthens it at speed, much to the benefit of stability. This Audi’s cornering prowess is fierce, its braking inspires confidence, and its thrust out of corners is beguiling.

Compared to many sports sedans, our test car’s 155-foot stop from 70 mph and 0.89-g skidpad orbit are only modest. But you can’t get anywhere near those numbers in a Lincoln Navigator or a Cadillac Escalade. We should note that you can further sharpen the SQ7’s chassis setup with the $5900 S Sport package, which is only available in conjunction with the $5600 Prestige package and brings a torque-vectoring rear differential and active anti-roll bars. Our Prestige-level test car didn’t have that equipment, but the added hardware isn’t necessary to enjoy the SQ7 on a good road. Its baseline agility and body control are impressive. 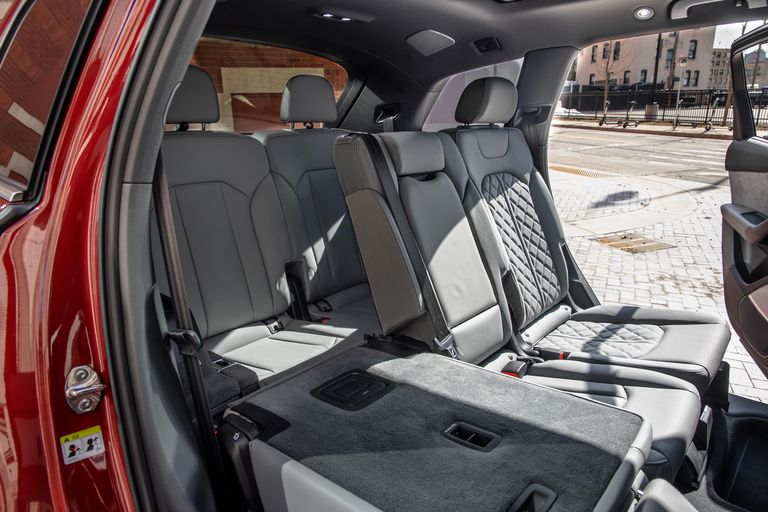 Many smaller, two-row performance SUVs deliver even greater driving satisfaction than the big SQ7. But in the realm of hot-rod utes with a dedicated third row of seats—a distinction that excludes the BMW X5 and other mid-size SUVs with optional third rows—the alternatives are few. Dodge will sell you a 710-hp Durango Hellcat for $82,490, but that limited-run model exists only for the 2021 model year and lacks the high-tech polish of the Audi. On the other side of the ledger is the larger, 603-hp Mercedes-AMG GLS63, yet landing one will cost you well into six figures. The $80,995 SQ7, on the other hand, is a five-digit bargain even when saddled with several pricey options, as was our $99,390 test car. Yeah, it’s still not cheap. But considering the SQ7’s impressive acceleration, handling, and refinement, it’s a mother of a deal.