By ArLuther Lee – The Atlanta Journal-Constitution

A police officer was among 10 people killed during a mass shooting at a grocery store Monday in Boulder, Colorado, according to reports.

A suspect has been arrested, although his identity has not yet been revealed.

The names of the dead will not be released until families are notified, police said.

Officials did, however, name the Boulder police officer killed as Eric Talley, who was the first to respond to the scene, according to authorities. Two other officers were hurt, although there was no word on the extent of their injuries.

Boulder Police Chief Maris Herald confirmed the death toll after 10 p.m. Monday, saying there were “10 fatalities at the scene,” reports said. Earlier reports had placed the number of dead at six. 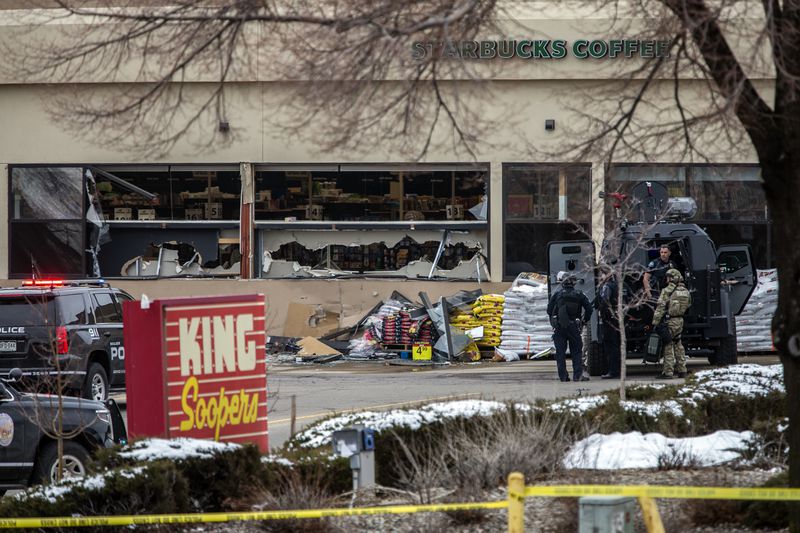 Earlier, a possible suspect was on the phone with police negotiators following the shootings, reports said.

A SWAT Team was later dispatched to a second location on 17th Street in Boulder, although it was unclear if that situation was related to the shooting at a King Soopers store in the southern part of Boulder, where shots rang out shortly before 5 p.m.

The shooting began outside the store, in the parking lot, and moved inside, according to reports. Some reports said some hostages may have been taken as the gunman barricaded himself inside.

The scene remained active more than two hours after shots were first reported, with police surrounding the building. Shoppers were evacuated from the store by police escort after the scene was brought under control.

One of the 10 victims was found dead in the parking lot, reports said. A vehicle believed to be connected to the gunman was also found there with a rifle case inside. 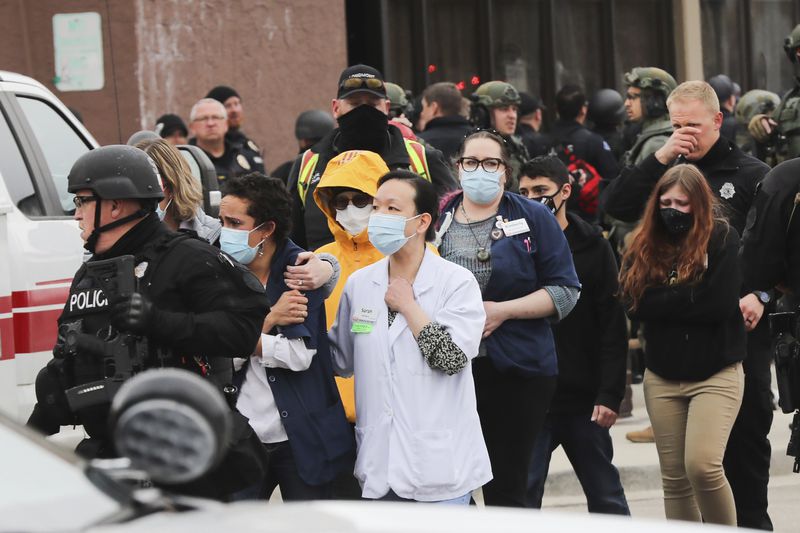 Initial reports said as many as 10 people had been wounded, some of whom took cover in an upstairs area of the business.

A witness who was getting a COVID vaccination at the store’s pharmacy said he and his family hid in a coat closet as gunshots rang out.

Four or five additional victims needed to be treated at scene after police and the suspect exchanged gunfire, according to reporter Eric Wasserman.

There was no official confirmation of the exact number of casualties as the chaos continued to unfold.

The suspect was reportedly armed with a rifle, possibly an AR-15.

At least one man was taken into custody, although it was unclear whether this individual was the gunman.

Video footage from the scene showed a shirtless man in shorts and no shoes being brought out of the store and led away in handcuffs, with blood streaming down his leg.

An ambulance pulled away from the store, apparently carrying the man, who still has not been identified by name. The Boulder district attorney later said that the injured person in custody was the alleged shooter, according to reports.

Reports said the shooter may have been wearing body armor during the standoff.

The popular King Soopers store is located in the 3600 block of Table Mesa Drive.

Video provided by television news helicopters showed law enforcement vehicles and officers massing outside, including SWAT teams, and at least three helicopters on the roof of the store. Officers had guns drawn, and some windows at the front of the store were broken.

At least 10 ambulances were at the scene.

Police advised the public to avoid the area.

A fire engine reportedly lifted a SWAT team onto the store’s roof.