This serves as a replacement for the Cadenza, also known as the K7, that was just dropped from Kia’s U.S. lineup.

– Kia has released a new sedan model called the K8, which replaces the Cadenza (also known as the K7 in global markets).

– We don’t expect to see this car come to the U.S., as Kia dropped the Cadenza from its lineup on our shores recently.

UPDATE 3/24/21: Kia has revealed more images of the K8’s exterior and interior. We have also updated this story with powertrain details about the available four-cylinder and V-6 engines.

Kia just killed off its Cadenza large sedan in the U.S., which means we aren’t likely to get its replacement, called the K8 (the Cadenza was called the K7 globally). And that’s a shame, because the K8 features an elegant design and looks like it could be a worthy competitor to sedans like the Lexus ES.

The K8 is slightly longer than the car it replaces. It continues with a front-wheel-drive, transverse-engine layout but now offers all-wheel drive as an option with the top engine choice, a 3.5-liter V-6 with 296 hp. Less powerful 2.5-liter and turbo 1.6-liter inline-four engines are also offered. An eight-speed automatic is standard with the 3.5L and 2.5L engines. 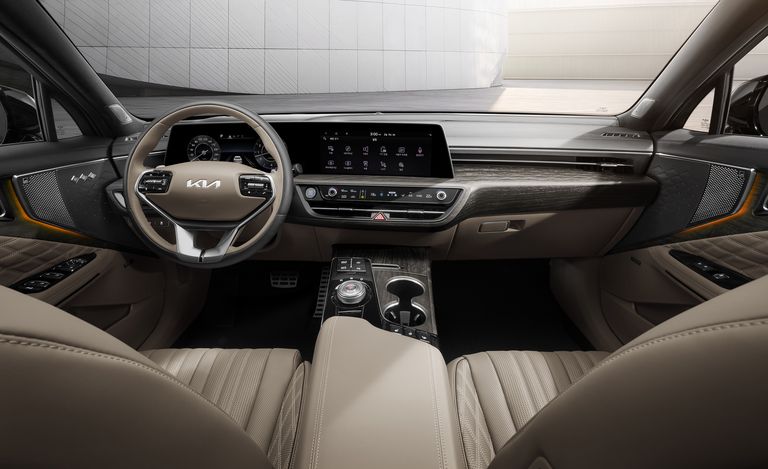 The company says that many of the K8’s design details—such as the interesting patterned grille treatment and the angular taillights—will make their way onto other upcoming Kia models. The K8 is also the first Kia to feature the company’s new logo. The block letters are prominently displayed on the hood and trunklid. In the U.S., the 2022 Kia Carnival minivan is the first car in the U.S. to get this new emblem. Inside, the K8 features two 12.0-inch screens, one serving as a digital gauge cluster and the other as the central infotainment display.

The car will go on sale later this year, starting in South Korea first. But don’t hold your breath for it to ever arrive on our shores.